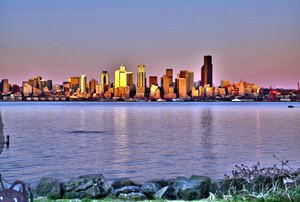 The cultural capital of USA - Seattle – never ceases to attract travelers by dozens of iconic architectural and cultural landmarks. Space Needle, EMP Museum, Museum of Asian Art, and Museum of History and Industry is, by far, not the complete collection of objects of interest. In this review, we will try to include descriptions of the most important architectural landmarks of Seattle. We accompany them with interesting facts, colorful photographs, and 3D virtual tours. These 3D tours allow you observing the landmarks from a bird’s eye view. Simply turn on the HD video and enjoy the flight! 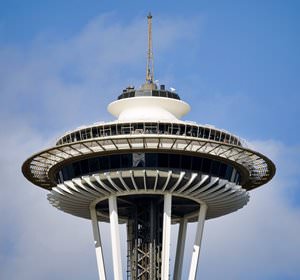 Facts:
» The locals call the skyward construction a needle. It differs from others in its subtlety and beautiful shape.
»  The 184-meter futuristic tower was erected in 1962. It is part of the Seattle Center exhibition complex.
»  During the international exposition, 20,000 people visited the top floor of the building every day. A figure of 2.3 million people was recorded – those who managed to get to the top during the World’s Fair.
»  The skyscraper is currently owned by a private individual.
»  The peak of the Space Needle was struck by lightning several times. There are 25 lightning rods blocking electrical discharges.
»  In 2001, the skyscraper swayed so much that water poured out of sinks. A thin spire can withstand a hurricane wind of 320 km/h.
»  An observation platform offers a magnificent view of the surroundings – a volcano and a bay.
»  The 160-meter viewing platform has a souvenir boutique and a restaurant.
»  The thin tower is topped with a wide round part. To go up, you can either use an elevator or take 848 steps.
»  The building weighs 550 tons.
»  When the Space Needle was under construction, it took 12 hours for 467 cement mixers to fill the pit with concrete. 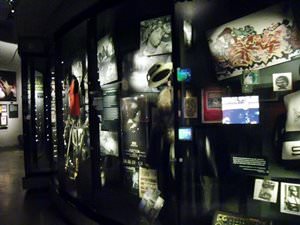 Facts:
» The offbeat museum was designed by Frank Gehry. Critics argue the building is too ugly and unconventional to be considered a landmark of the city.
»  The construction of the undulating building cost $250 million.
»  The concrete building with a steel structure contains 3,000 blocks made of 21,000 sheets of aluminum of different colors – golden, silver, red, blue, green, purple. It creates an impression that the palette of the external facade is constantly changing.
»  The unusual building was shaped to resemble a famous guitarist’s guitar. Jimi Hendrix played a prominent role in the development of American pop music.
»  There’s a concert stage inside. Electronic equipment and a huge LCD screen let visitors fully enjoy the show.
»  A huge structure made up of guitars is part of the interior. The sculpture rises in the center of the exhibition hall.
»  Later, the Science Fiction Museum and the Hall of Fame were built. All together they make up the EMP complex.
»  The building was primarily designed to promote the avant-garde movement in the modern music movement. 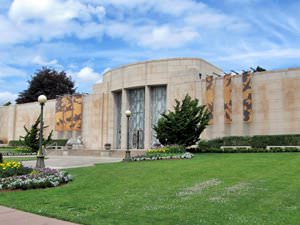 Facts:
» One of the facilities of the Art Museum is situated in a park.
»  The exhibitions in this department are dedicated to Asian countries (China, Korea, Japan, the Himalayas, India, etc). Paintings, sculptures, household textile and pottery articles are on display.
»  The cultural institution has 24,000 unique objects.
»  Exhibitions are held in the old building. The museum shop offers goods of Asian origin, printed publications dedicated to the culture and art of the states in question.
»  The 17-18th-century Chinese and Japanese articles from translucent white porcelain attract a lot of attention. Rich Europeans could afford to buy porcelain of such quality.
»  There’s a separate area showing the royal porcelain room. Aristocrats and wealthy merchants liked such rooms.
»  This kind of ceramics was valued just as expensive as gold. The quality was checked with a wooden stick. The translucent edges of a bowl should make a high and clear sound.
»  The rooms were decorated from ceiling to floor with antique porcelain and valuables in the form of decor.

Museum of History and Industry, Seattle 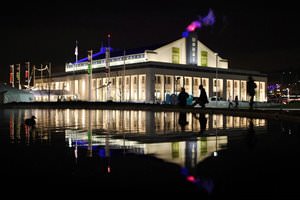 Facts:
» You can learn the city chronicle by visiting the Museum of History & Industry.
»  The museum is divided into 10 zones.
»  The Brinkley Hall immerses you in the atmosphere of Seattle, when the intensive industrial development of the region was underway.
»  There’s a gallery dedicated to the fire that engulfed many buildings.
»  Apart from permanent ones, there are temporary themed exhibitions. One of them is about the fishing industry development in the 20th century.
»  Car enthusiasts should definitely take a look at Ford. The car was produced in 1992.
»  The Armory used to stand on stilts on the site of the cultural institution. It rose above the lake surface.
»  A glass hole was cut out in the floor of the hall. You can see water through it.
»  A 20-meter Wawona sculpture is situated above it. It rises from the floor towards the ceiling going a meter above the roof. The sculpture was made from a fragment of an old schooner of the same name. It took two years to create it.
»  The museum halls are filled with photos and interactive exhibits. There’s a screen showing the terrain and the changes associated with the development of the area.
»  The Museum of History & Industry (MOHAI) was opened in 2012. 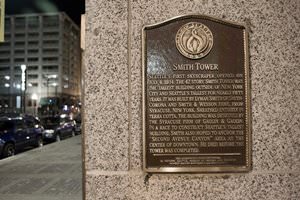 Facts:
» Smith Tower is considered to be the oldest skyscraper in the city. It was erected in 1914.
»  It was the tallest office building then. It was named for a financial industrialist Cornelius Smith.
»  The magnate originally intended to build a 14-story construction. However, following his son’s advice, he constructed a higher 38-floor building. The entrepreneur wanted his skyscraper to compete in height with other buildings.
»  Construction works lasted for 48 months. Unfortunately, the owner died before his creation was completed.
»  The beautiful 149-meter building ends with a pyramid-shaped 2.5-meter dome. Its base is made completely of glass.
»  The dome is constantly illuminated with blue light. The color changes to green only in December.
»  The 35th level is occupied by an observation platform with a great view of the surrounding neighborhoods.
»  There is a “Chinese” room on the floor as well. The ceiling was made by skilled carvers. The antique furniture found here is a present given by Empress of China, Cixi.
»  A manually operated elevator cabin has a decorative brass finish. There are eight elevators in the building.
»  Smith Tower has a huge number of windows. 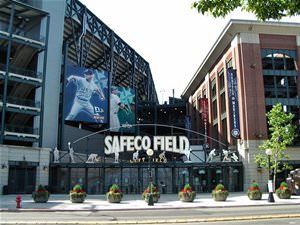 Facts:
» Safeco Field (T-Mobile Park) is a baseball park.
»  Washington-King is the company operating the sports complex.
»  Over 47,000 fans come to watch the competitions.
»  Besides amateur baseball competitions, the arena hosted an American football team on the home field. A record number of fans gathered then – 54,097.
»  Safeco Insurance bought the rights to the name of the stadium. It paid $40 million for the 20-year naming rights.
»  Construction works began in March 1997. Two years later, a grand opening ceremony was held.
»  The construction of the building cost 511.6 million US dollars.
»  The retro-modern architectural style was chosen for Safeco Field. It traditionally combines the qualities characteristic of all stadiums of this type, but certain innovations were also applied – the stadium is covered with a retractable roof.
»  There are some works of design art on the sports ground and near it – a chandelier consisting of thousands of baseball bats and an 8-meter compass hanging in the main lobby.

Facts: » 1996 is not the year when the church was built, but the year when it originated as Christ’s creed.
»  Mark Driscoll became an adept. The founders rented a house to preach their views. At first, the audience consisted of 30 people. New people continued to come, so visitors began to gather in a church.
»  The first official service was attended by 160 parishioners. Evening and weekend services and online sermons started to be held. More than 260,000 people watched them online.
»  However, church leadership controversies began to arise. Pastor Mars Hill claimed in his sermons that many believers used the name of the Most High in the pursuit of self-serving goals.
»  In protest against that, Driscoll once arrived for the evening service in a hearse dressed in funeral robes. This defiant behavior was meant to communicate that religious organizations would either fade into oblivion or be able to be reborn in a new incarnation.
»  The church elders attempted to reorganize the religious dogma. But the pastor chose to resign.
»  The church leadership decided to dissolve the community, and the building located in the western part of the city was sold for $9 million.

CONTINUE - PART II »»
This guide to architectural sightseeing in Seattle is protected by the copyright law. You can re-publish this content with mandatory attribution: direct and active hyperlink to www.orangesmile.com.
Seattle - guide chapters 1 2 3 4 5 6 7 8

Build your walking routes in Seattle on the landmark map 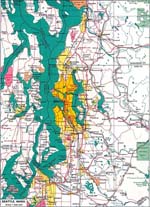 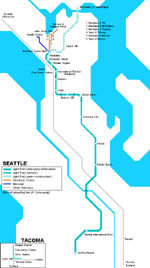 Architectural landmarks in the regions around Seattle

Vancouver
The technologically advanced building is the museum called Science World. It is the whole “town” divided into six pavilions. Each gallery is decorated in its particular style. In “Eureka”, you can play and experiment with exhibits. These items can make you comprehend the physical laws of light, sound, and water. In “Illusion”, you can learn about the sense of pictures and how the brain changes the vision of them, although straight ... Open »
Calgary
The 190-meter tower was built to celebrate the hundredth anniversary of Canada. The construction cost $3 500 000. The total weight of the tower s over 10 tons. In 1971, it was named “Calgary Tower”. The skyscraper is seismically stable and can withstand earthquakes and wind speed of 161 kmh. It had been constructed for a year and 3 months. The building is cylinder due to the continuous filling of concrete mixture. In the Husky ... Open »
Edmonton
The building was being built for administrative needs from 1907 to 1912. The exterior is typical for state institutions of that period and distinguished by the neoclassical style. Two types of natural stone were used for the exterior. The lower part of the building is granite. The upper part and columns are covered with sandstone. The rotunda was constructed of over 2 000 tons of marble. Each cylinder weighs 16 tons. The pillar is cut from a ... Open »
San Francisco
The City Hall is the administration building of San Francisco built in 1915 on the site of the original structure that was destroyed in a massive earthquake in 1906. The dome of the administration building is the fifth largest in the world. During working hours on weekdays entrance to the building is free. In the evening and on weekends premises of the building can be rented for banquets, meetings and ceremonies. You can register the marriage ... Open »
Las Vegas
Bellagio is a five-star hotel and casino located in the Las Vegas Strip. The main attraction of Bellagio is a musical fountain in front of the hotel. The hotel was built at the site of the legendary Dunes hotel and casino bought by Steve Wynn and demolished in 1993. Initially, the project was estimated at $1.6 million. Bellagio was festively opened on 15 October 1998. In Bellagio, there is a botanical garden and a special exhibition hall ... Open »
OrangeSmile.com - online travel reservation expert providing reliable car rental and hotel booking services. We feature more than 25.000 destinations with 12.000 rental offices and 200.000 hotels worldwide.
Secure Server