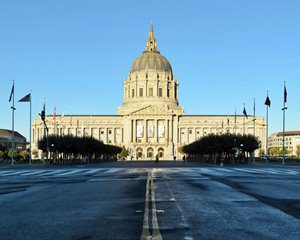 Facts:
» The City Hall is the administration building of San Francisco built in 1915 on the site of the original structure that was destroyed in a massive earthquake in 1906.
» The dome of the administration building is the fifth largest in the world.
» During working hours on weekdays entrance to the building is free. In the evening and on weekends premises of the building can be rented for banquets, meetings and ceremonies.
» You can register the marriage at the day of application, if there is free time in the schedule of registrations. The presence of guests and witnesses of the bride and groom are optional.
» Marilyn Monroe and the baseball player Joe DiMaggio have registered their marriage in 1954 in the City Hall. 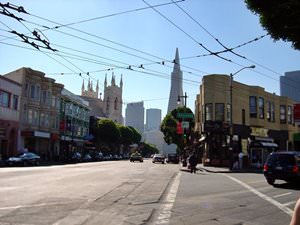 Facts:
» Transamerica Pyramid is the symbol of San Francisco and the tallest building in the city. The height of this 48-story building is 260 meters.
» The skyscraper was built in 1972; it’s located right in the city center.
» The building no longer houses the corporate headquarters of Transamerica. Currently, lessees of the building are more than 50 different companies, which employ about 1,500 workers.
» The building features extraordinary design that allows light to come through it into the streets.
» Unfortunately, the entrance to the pyramid is currently closed to outsiders, so you can admire the structure from outside only. Facts:
» The Museum of Modern Art is the art museum that houses an extensive collection of works of art belonging to the modern period.
» The Museum of Modern Art in San Francisco was opened in 1935 as a private, non-profit enterprise.
» The museum was transferred to the present building, designed by Swiss architect Mario Botta, in January 1995.
» In the museum you can see the works by painters, sculptors and designers such as Henri Matisse, Marcel Duchamp, Ansel Adams, Franz Marc, Theo van Duisburg, Paul Klee, Jackson Pollock, Martin Kippenberger, Klaus von Bruch, Kerry James Marshall, Eero Saarinen, and others.
» The Museum of Modern Art in San Francisco is truly important; that’s the most visited museum in the city. Facts:
» Cliff House is the popular restaurant in the northern part of Ocean Beach.
» Cliff House Restaurant is famous for its gorgeous views of the ocean and seals, dolphins and pelicans living nearby.
» Cliff House has two restaurants at the same time: the luxury Sutro on the ground floor, and the lowly Bistro on the first floor.
» Celebrity photos with autographs decorate walls of Bistro. This restaurant often attracts many Hollywood stars.
» Cliff House serves the best fish stew in San Francisco.
» In addition to two restaurants, there is a terrace for Sunday brunch, a gift shop and historical pinhole camera with a view of the ocean. Facts:
» Opera San Francisco is the second largest opera house in the United States.
» The Opera was founded in 1923 to copy the Metropolitan Opera of New York. Celebration in honor of the opening of the San Francisco Opera is one of the most prominent events in the musical and social life of San Francisco.
» This opera is known to many due to Pretty Woman movie; that’s where the characters of Julia Roberts and Richard Gere were listening Traviata.
» Opera San Francisco is the historical monument of architecture and a particular style. Amazing acoustics of the opera is in harmony with the equally impressive decor of the room.
» Opera season starts from around June 1st. The main thing is to book tickets in advance. Facts:
» Alcatraz is the island in San Francisco Bay that is a popular attraction, which is annually visited by many tourists.
» Alcatraz has been featured in many movies, cartoons and TV shows; it’s mentioned in numerous books and computer games.
» Alcatraz has served as a military prison for a long time; after that it was a federal prison until 1963.
» The Alcatraz was a high-security prison with maximum security and minimum benefits for prisoners. The most famous criminals of the United States, gang leaders, and especially dangerous recidivists were among the prisoners of Alcatraz.
» According to the federal government, during the existence of a federal prison, none of the prisoners who tried to escape from the island could do that. However, from 1861 to 1933, when Alcatraz served as a military prison, successful attempts to escape from the island were reported.
» Today the island is turned into the museum, where you can get by ferry from San Francisco departing from the pier No. 33.

CONTINUE - PART II »»
This guide to architectural sightseeing in San Francisco is protected by the copyright law. You can re-publish this content with mandatory attribution: direct and active hyperlink to www.orangesmile.com.
San Francisco - guide chapters 1 2 3 4 5 6 7 8

Build your walking routes in San Francisco on the landmark map

Architectural landmarks in the regions around San Francisco

Los Angeles
The Hollywood Sign, one of the symbols of Los Angeles, is a famous commemorative sign on the Hollywood Hills. The sign is widely known and has become a trademark of the entire US film industry. The sign was created in 1923 and has been repeatedly vandalized and then restored throughout its history. Now it is protected with a modern security system. The sign makes frequent appearances in films and TV shows shot in or near Hollywood. During ... Open »
Las Vegas
Bellagio is a five-star hotel and casino located in the Las Vegas Strip. The main attraction of Bellagio is a musical fountain in front of the hotel. The hotel was built at the site of the legendary Dunes hotel and casino bought by Steve Wynn and demolished in 1993. Initially, the project was estimated at $1.6 million. Bellagio was festively opened on 15 October 1998. In Bellagio, there is a botanical garden and a special exhibition hall ... Open »
Seattle
The locals call the skyward construction a needle. It differs from others in its subtlety and beautiful shape. The 184-meter futuristic tower was erected in 1962. It is part of the Seattle Center exhibition complex. During the international exposition, 20,000 people visited the top floor of the building every day. A figure of 2.3 million people was recorded – those who managed to get to the top during the World’s Fair. The ... Open »
Vancouver
The technologically advanced building is the museum called Science World. It is the whole “town” divided into six pavilions. Each gallery is decorated in its particular style. In “Eureka”, you can play and experiment with exhibits. These items can make you comprehend the physical laws of light, sound, and water. In “Illusion”, you can learn about the sense of pictures and how the brain changes the vision of them, although straight ... Open »
Calgary
The 190-meter tower was built to celebrate the hundredth anniversary of Canada. The construction cost $3 500 000. The total weight of the tower s over 10 tons. In 1971, it was named “Calgary Tower”. The skyscraper is seismically stable and can withstand earthquakes and wind speed of 161 kmh. It had been constructed for a year and 3 months. The building is cylinder due to the continuous filling of concrete mixture. In the Husky ... Open »
OrangeSmile.com - online travel reservation expert providing reliable car rental and hotel booking services. We feature more than 25.000 destinations with 12.000 rental offices and 200.000 hotels worldwide.
Secure Server