Sightseeing in Coimbra - what to see. Complete travel guide 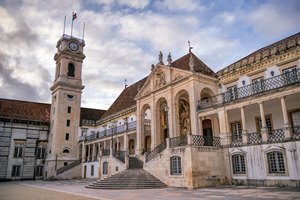 The enchanting city of Coimbra is the former capital of Portugal. Nowadays, this is an interesting university city that has retained its medieval look. This is the cradle of culture in the country. Besides that, this is the birthplace of philosophy in Portugal. Coimbra is home to the oldest university in Portugal and one of the oldest universities in the world. When taking a stroll on the beautiful streets of the city, you will feel like you have just made a time travel and have returned to the medieval period. Every building here has an interesting story to tell. Every seventh resident of Coimbra is a student, and this is the reason why Coimbra is often referred to as “the city of students”.
In the past, there was a settlement called Conímbriga not far from modern Coimbra. That settlement gave the name to the Portuguese city. When Sueves and Visigoths invaded the region, local people had nothing to do but to abandon their houses and move to Eminium Hill situated near the bank of the Mondego River. This is where Coimbra was initially located. The settlers kept the name of their homeland and used a short form of the name, changing it to Coimbra. The Moors conquered the new city in the 8th century. Christians managed to return the region only in the 60s of the 11th century thanks to the help of Ferdinand the Great.
In 1139, King Afonso Henriques ordered to make Coimbra the capital of Portugal. The city retained this status until 1256. During the Renaissance period, the city was already an important scientific and academic center in Portugal. The university was continuously attracting the best professors and mentors. Coimbra had to endure a tough period during the war with Napoleon. The French army completely destroyed and plundered the city. When the war was over, students formed a group and together managed to rebuild the cultural capital of Portugal. Copyright www.orangesmile.com
Coimbra is incredibly rich in various landmarks and historical attractions. Each of them has its own unique charm. Start your acquaintance with the city with a visit to a museum park that has a small version of the whole of Portugal. This is a small village that, nevertheless, shows how diverse and beautiful the country is. Established in 1940, the park features all major architectural landmarks of the country, as well as famous sculptures and monuments. 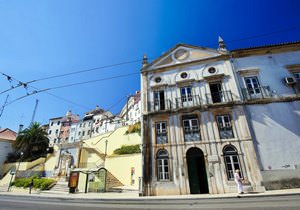 Besides them, there are small copies of traditional houses in this region of Portugal. Beautiful flowers have become an essential part of the park. Naturally, many adults visit this park, but children will not feel bored here as well. When planning the park, legendary founder Bissaya Barreto intended it mostly for children, so he chose the size that would be suitable for young guests. Kids can see all the major landmarks of Portugal in a playful manner and don’t feel bored or tired.
Do you enjoy visiting shrines and churches while traveling? Coimbra invites its guests to visit the Old Cathedral of Coimbra. There was a cathedral on the site of the modern one, but it was destroyed during the invasion of the Sueves in the 5th century. In the middle of the 12th century, it was decided to rebuild the cathedral, but the ruins were in such a bad condition that they were demolished and a new beautiful cathedral appeared on that site. The beautiful Romanesque Roman Catholic church is open for visitors and has public masses regularly. 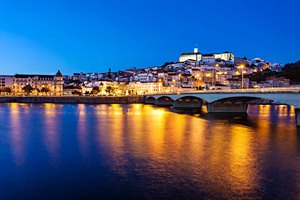 It would be a mistake not to mention the New Cathedral of Coimbra. This is a relatively big building with the pink marble exterior. Built in the 16th century, the cathedral has retained its original look until modern times. If you take a look at the façade of the church, you will notice different sculptures, each of which has its own arc. Windows are decorated with interesting bas-reliefs, and a big stone staircase leads to the main entrance. There is the city’s coat of arms at the top of the façade.
In the opinion of many, the Botanical garden is the most beautiful attraction of Coimbra. It is located not far from the cathedral. The serene “green paradise” was established in the 18th century. Its territory expanded several times until it reached the current size. The garden’s staff has established connections with botanical gardens from different parts of the world. Thanks to this fact, there are plants that are typical for different continents, even for Africa. Besides the typical flora, there are beautiful herbariums made from various plants. 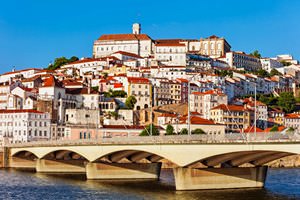 It is possible to get to Coimbra from Porto and Lisbon. As a rule, airplanes with tourists arrive in these two cities. It takes one hour to get to Coimbra from Porto by train and two hours if you go from Lisbon. Tourists can also choose to travel by bus. This means of transport is cheaper and is approximately as fast as the train. In case of a need, tourists can always rent cars in the airports of the mentioned cities and travel to Coimbra independently.
This guide to iconic landmarks and sights of Coimbra is protected by the copyright law. You can re-publish this content with mandatory attribution: direct and active hyperlink to www.orangesmile.com.

City tours, excursions and tickets in Coimbra and surroundings

Survived castles around Coimbra
♥   Castle 'Castle of Penela' , 19.2 km from the center. On the map

National and city parks around Coimbra
♥   Nature Park 'Serra da Estrela' , 70.4 km from the center. On the map

Sights around Coimbra from our guide 'Extreme places on Earth' 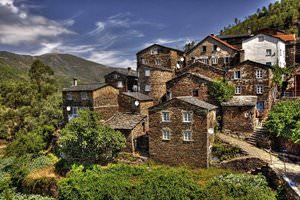 Distance from Coimbra center - 49.8 km.
A nice hotel was opened in one of the ancient buildings. More than that, just every town’s house is open for tourists. It is possible to rent whatever you want. Also, the town has two cosy national restaurants where you can try the most popular national dishes. A major part of them contains delicious sheep and goat cheeses. Note that the town has great liquors. Near the Piodao you can see a lot of picturesque landmarks. During the walk in the mountain regions, you can see wonderful fountains and fast streams. … Read further

Search touristic sites on the map of Coimbra

Sightseeing in regions nearby Coimbra

Aveiro
Aveiro’s population was actively involved in fishing. The sea was generous to fishermen, so they could sell their catch and provide food for their families. However, the area started suffering from strong storms later. Storms became so frequent that they caused much damage to local people. A giant sand dune suddenly appeared in the coastal waters. It formed a lagoon and ... Open »
Leiria
The central street of the town is named Marques de Pombal. Near the street is located a bus terminal, from which you can easily reach all main cities of Spain (Madrid, Barcelona) and Paris. The railway station is located in the town’s suburb. There are many cafes, shops, and banks in Leiria. The majority of them are the representatives of large European chain stores like ... Open »
Tomar
This picturesque town is situated on the bank of the Nabao River. First mentions of the city belong to the 12th century. According to one legend the first settlers of this place were the Templars, who built a fortress on a hill. Steadily new and new buildings appeared around the castle. Today only Charolais Church reminds of the past centuries. This church was built a few years ... Open »
Porto
Praça da Ribeira. Praca da Ribeira is the heart of the quarter. This is a small cozy square with a work of contemporary art in the center – the square is decorated with a cube (O Cubo) by Jose Rodriguez. Despite the chaotic intersection of streets, it’s almost impossible to get lost in Ribeira district – if you go down, you will surely come out to the banks of the ... Open »
Guimaraes
Guimaraes is located on the north-west of Portugal. This is an important historical city, which population estimates around 53 thousands of people. Guimaraes is known as the first capital of the country. Even nowadays this place is a symbol of the first large city in Portugal. This statement is proven by numerous historical monuments and castle towers that have become the ... Open »
Braga
The Gardens of Saint Barbara are considered the most beautiful park in Braga. While walking among old trees, you will get a chance to see beautiful fountains, the statue of Saint Barbara and the Archbishop’s Palace. Among important religious buildings we should also underline the Santa Crus Church, Casa dos Koimbras, the Church of Saint Peter, and the Carmo church. Apart ... Open »

All about Coimbra, Portugal - sightseeings, attractions, touristic spots, architecture, history, culture and cuisine. Prepare your trip together with OrangeSmile.com - find out the 'must see' things in Coimbra, which places to visit, which excursions to take, where the breathtaking views are waiting for you. Planning your trip with this travel guide will help your to get the most out of Coimbra in few days.