Sightseeing in Terceira Island - what to see. Complete travel guide

Terceira is a part of the Azores situated in the center of the archipelago. Many travelers know it under its informal name, the Purple Island. The island owes its second name to the unique nature, as almost all of its central area is occupied by the reserve. Numerous settlements are concentrated near the coast. Every local town and every village boasts a variety of interesting historical monuments.
Family holidays with kids in Terceira Island. How to entertain your child, things to show to children.
Terceira is a place where the child will want to come back, despite the fact that there are no special "children's" entertainments such as amusement parks or water parks. If you wish, you …

. All of its territory is considered a historical monument of world significance. Here you can see the most gorgeous buildings of different eras. One of the most spectacular landmarks is the Supreme Court building. The town Sao Mateus da Calheta

is perfect to explore the island's history and culture of the indigenous population. In ancient times there was a large town on this site; survived ruins of ancient fortresses, Negrito

, remind about the former splendor. These fortresses have been built in the Middle Ages and for many years have defended the island from the Spanish conquerors.
The historical monument of the later period is the Holy Ghost Chapel; its construction took place in the 19th century. Nearby there is another unique religious monument, the parish Church of Santa Barbara

. The first religious building on its place has been built in the 15th century, since than the church was being continuously rebuilt and changed its shape. Interior of the church is of great value, almost all the elements of decor were handmade. Copyright www.orangesmile.com
Cuisine of Terceira Island for gourmet with top restaurants and cafe
Be sure to try the local cuisine during your holidays on Terceira. The island chefs have been modified traditional Portuguese recipes for centuries and have come up with their own. You can …

village attracts hikers and fans of educational tours. It's famous for its amazing scenery; while walking on the bank of the stream a few surviving windmills can be seen. This lovely village has its religious hallmark, with which lots of wonderful stories are associated. That's the Divino Espirito Santo

Church. The must-see point of many excursions is the picturesque town of Lajes

. There was a large air base there during World War II, so today the town is an important part of the defense system of the Atlantic. The most interesting attraction of the town with a rich military background is the Church Sao Miguel Arcanjo

named after its patron saint. 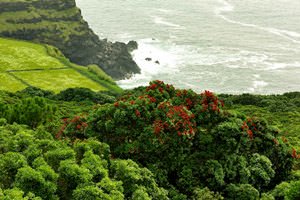 The oldest town on the island is Sao Sebastiao

. This large settlement has got the status of the city in 1503. Centuries later, the city was able to maintain its unique historic atmosphere, so there is a huge selection of beautiful places to walk. The main historical symbol of the city is the Church of Sao Sebastiao

that has witnessed many important events. Close to the church there is the Santa Ana Chapel that never ceases to amaze travelers with its fascinating appearance.
Authentic traditions, festivals and lifestyle of Terceira Island inhabitants
Once on Terceira, remember that locals love their small homeland and their national traditions. Moreover, they cannot tolerate all comparisons with the neighbours. They are especially …

Open
Fans of natural attractions won't be bored in the central part of the island, as it has a lot of interesting hiking trails. Some priceless historical sites of Terceira are hidden under the water, so divers will be able to see wrecks of merchant ships and naval frigates off the coast. This picturesque island is ready to offer a rich program of excursions and interesting historical monuments literally anywhere around. 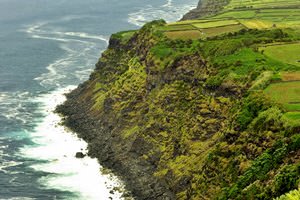 Guests of Terceira will have an opportunity to enjoy their favorite sports and beach recreation. Praia da Vitória remains the most popular beach of the region. Travelers will find several modern centers specializing in water sports in its territory. Fans of trouble-free relaxation, as well as tourists who have always wanted to try surfing and yachting, will find it very interesting to visit it. The choice of active recreation options is really rich on Terceira. For example, travelers traditionally like excursions to underground caves and hiking tours to the main mountains of the island.
Excursion over cultural sights of Terceira Island - 'must visit' points of interest
If you have come to the island, be sure to visit the oldest town not only on Terceira but on all of the Azores - Angra do Heroísmo, which the locals often simply call Angra. The settlement …

Open
St. Barbara Mount is one of the main mountains of the region and an incredibly picturesque place. While enjoying an excursion there, travelers can see various rare plants and important geological landmarks. Terceira is also famous for its modern golf centers. There are 18 golf courses on the island in total. All the courses are intended for players of a different level, from beginners to experienced players. Moreover, travelers can try to play golf with children in some golf clubs. Fishing is one more amazing way to make any vacation more exciting and diversified. Vacationers are also welcome to rent a boat and use it to reach the most distant beaches.

This guide to iconic landmarks and sights of Terceira Island is protected by the copyright law. You can re-publish this content with mandatory attribution: direct and active hyperlink to www.orangesmile.com.
Terceira Island - guide chapters 1 2 3 4 5 6 7 8

Search touristic sites on the map of Terceira Island

Sightseeing in regions nearby Terceira Island

Graciosa
In addition to the windmills, many original old streets and luxurious mansions that have adorned the island since colonial times, have been preserved here in their original form. One of the oldest buildings is Church of Santa Cristo, the construction of which took place in the 16th century. The religious landmark has witnessed many important historical events. It is a unique ... Open »
Azores
One of the most unforgettable caves is located on the Terceira Island and is called Algar do Carvao. It was created at the times of volcano explosion and looks like a 100 meter long tube made of cold magma. The island’s capital, Angra do Heroísmo, has such well-known sights as São João Baptista and San Sebastian fortresses, Kapitaish Zheneraish and Betancourt castles, ... Open »
Pico Island
Fans of walks in historical places should definitely look into the city of Lajes, whose main historical object is São Pedro monastery. Nearby, is a beautiful Nossa Senhora da Conceição Church, built in full accordance with national traditions. A walk through the ancient fishing town of Lajes will be an ideal place to explore the life of indigenous population. Here, ... Open »
Ilha do Faial
Volcanic islands are famous for their amazing natural attractions; sightseeing is the basis of any excursion program. In the immediate vicinity to the island's capital, Horta, there is the coastal area of Punto Furada that would be interesting to explore. During formation of the island there appeared a series of stunningly beautiful lava caves and arches that are striking in ... Open »
Ponta Delgada
Fans of diving and surfing also have a suitable beach in Ponta Delgada – Milicias Beach situated five kilometers from the city center. Just like other beaches in the region, Milicias is covered with black volcanic sand. This coastal area has a fairly developed beach infrastructure with rental offices offering the equipment for a range of water sports and activities. The sea ... Open »
Sao Miguel Island
The capital of the island is the city of Ponta Delgada; old streets survived there represent its main treasure. Strolling through the city, you can see beautiful buildings everywhere; most of them were erected in the 18th century. However, main sightseeing sites of San Miguel are its natural attractions. The starting point of many excursions is Sete Cidades lake. It’s ... Open »

All about Terceira Island, Portugal - sightseeings, attractions, touristic spots, architecture, history, culture and cuisine. Prepare your trip together with OrangeSmile.com - find out the 'must see' things in Terceira Island, which places to visit, which excursions to take, where the breathtaking views are waiting for you. Planning your trip with this travel guide will help your to get the most out of Terceira Island in few days.