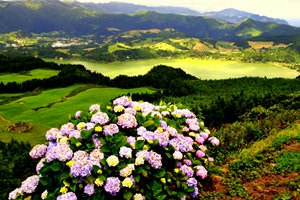 The largest of the Azores, San Miguel, has long begun to attract curious travelers. People come here to see its priceless historical monuments, have a scenic stroll and relax at charming beaches untouched by civilization. San Miguel owes its unofficial name, "Green Island", to picturesque landscapes and a huge number of unique natural attractions. Travelers preferring to devote considerable time to strolls through historic sites would find a lot of pleasant surprises.
Excursion over cultural sights of Sao Miguel Island - 'must visit' points of interest
There are several quite old productions on the territory of Sao Miguel. For example, famous winery Quinta da Jardinette is located in Fenais da Luz. Here you can try several varieties of …

Open
The capital of the island is the city of Ponta Delgada; old streets survived there represent its main treasure. Strolling through the city, you can see beautiful buildings everywhere; most of them were erected in the 18th century. However, main sightseeing sites of San Miguel are its natural attractions. The starting point of many excursions is Sete Cidades

lake. It’s situated in the crater of one of the extinct volcanoes; climbing to the top of it would be an unforgettable adventure. It’s certainly worth to see Lagoa do Fogo, whose name fully reflects its main feature. There are natural pools being among the most visited sites on the island in the immediate vicinity of the volcano.
Tobacco and tea plantations have been undisputed symbols of the island for many years. It’s noteworthy that San Miguel is the only one among the Azores, where tea is grown. Ribeira Grande is the local center of cultivation, where guests can stroll through the old plantations and learn many interesting things about national fields. Very unusual objects are Mosteiros

pools formed of lava flows. They look very impressive; it’s believed that water in pools has healing properties. Copyright www.orangesmile.com
Your active city break in Sao Miguel Island. Attractions, recreation and entertainment - best places to spend your day and night here
There are several quite interesting natural objects on the territory of Sao Miguel. For example, you can swim in the incredibly hot ocean on the volcanic thermal beach Plata da Ferraria at …

Open
It’s definitely worth to include a visit to Furnas

in the excursion program. This is where the Valley of Geysers is situated. Watching powerful fountains of hot water that burst from the ground is very popular activity among tourists. After admiring geysers, you should definitely look into the nearby botanical garden; its collection of exotic plants and flowers is just lovely. It’s also worth noting that Furnas also has a great natural pool fed by one of the mountain springs. 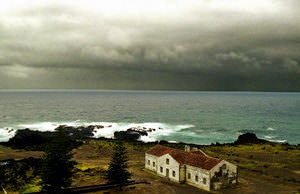 Another popular excursion object is old winery Quinta da Jardinette, which would be interesting to everyone. There is a daily fascinating tour including the traditional wine tasting. Those fond of elite tobacco are recommended to visit Maia

, where there is the attractive Museum of tobacco, as well as one of the oldest tobacco plants, Fabrica de Tabaco "Estrela". During trip to the island’s capital, you can visit the old brewery Melo Abreu

, which has being operating since 1893. This is just a small part of amazing tour facilities providing lots of unforgettable experiences and allowing to appreciate unique culture and heritage of the island.
Top hotels in Sao Miguel Island for business trip or short vacation
Upscale resort-style hotels dominate on the island; each of them is ready to offer its guests a lot of unique services. One of the most popular hotels is Ponta Delgada situated in the heart …

Open
Sao Miguel is an ideal destination for eco-tourism. There are several natural resorts and excellent beaches famous for their clean environment on the island. Aqua d’Alto is an excellent choice for a family vacation. This beach has soft golden colored sand. Aqua d’Alto is a flat and calm place with nearly no waves, so even travelers with small children will find it comfortable to stay there. Praia do Areal de Santa Bárbara is located in a picturesque bay. This beach is also a sandy one. The beach has strong waves very often, so it is an optimal choice for all surfers. 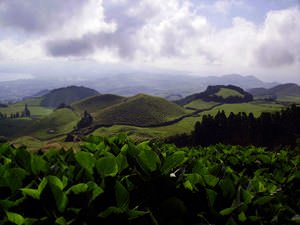 Fogos is a lot calmer and less crowded place. This beach has unusual black sand that is of volcanic origin. It is a great place to sunbathe and enjoy the fabulous nature of the area away from people. Fans of seclusion and intimacy will be also delighted with Praia do Pópulo. This beach is located at a distance from major tourist centers, so there are always not many vacationers there. There are several modern water sports centers on the island. Besides that, tourists usually enjoy excursions, during which they can see whales in their natural habitat.

This guide to iconic landmarks and sights of Sao Miguel Island is protected by the copyright law. You can re-publish this content with mandatory attribution: direct and active hyperlink to www.orangesmile.com.
Sao Miguel Island - guide chapters 1 2 3 4 5 6 7 8

Search touristic sites on the map of Sao Miguel Island

Ponta Delgada
The enchanting city of Ponta Delgada is an amazing resort and the capital of the Autonomous Region of the Azores. The city has many luxurious villas and beautiful churches that have been here since Ponta Delgada was a large and important port. Having arrived in Ponta Delgada, tourists usually enjoy swimming in thermal springs and visiting volcanic lakes, many of which are ... Open »
Terceira Island
The oldest town on the island is Sao Sebastiao. This large settlement has got the status of the city in 1503. Centuries later, the city was able to maintain its unique historic atmosphere, so there is a huge selection of beautiful places to walk. The main historical symbol of the city is the Church of Sao Sebastiao that has witnessed many important events. Close to the church ... Open »
Azores
The oldest buildings and most beautiful lakes can be found on the biggest island of the archipelago – Sam Miguel. Here you should definitely visit the Church of St. Sebastian, Fonte Bela Palace, the Church of St. Peter, the Town Hall, and the house-museum of Carlos Machado. The capital city of the island, Santa Maria, is a place where you can find oldest buildings and see ... Open »
Graciosa
A sulphurous cave Furna do Enxofre remains one of the most visited landmarks. It's a very interesting natural formation, that has been formed exclusively under the influence of the forces of nature. The entrance to the cave is located in the crater of an extinct volcano. Its depth is about 100 meters. The tunnel ends up with a large grotto with a domed vault whose height is ... Open »
Ilha do Faial
Norte Pequeno and Fazha da Praia do Norte attract many travelers with their amazing Martian landscapes. Here you can stroll through the extensive lava fields and see extinct volcanoes. Ilha do Faial has appeared thanks to once vigorous volcanic activity. Adventurers will enjoy walking along Costa Brava cliff, whose height is more than 300 meters. This is one of the most ... Open »
Camara de Lobos
Swordfish is the main delicacy in the region. Locals call it espada preto. If you look at it, you will notice that this fish looks more like a saber than a sword. Local fishermen catch this delicacy deeper in the ocean. The fish looks scary and can be 3-4 meters long. Despite the look, it tastes divine. The meat of swordfish is tender and juicy. The most important is to cook ... Open »

All about Sao Miguel Island, Portugal - sightseeings, attractions, touristic spots, architecture, history, culture and cuisine. Prepare your trip together with OrangeSmile.com - find out the 'must see' things in Sao Miguel Island, which places to visit, which excursions to take, where the breathtaking views are waiting for you. Planning your trip with this travel guide will help your to get the most out of Sao Miguel Island in few days.