Sightseeing in Ponta Delgada - what to see. Complete travel guide 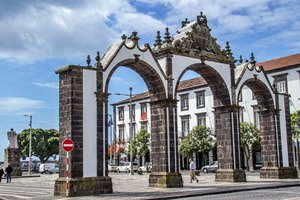 The enchanting city of Ponta Delgada is an amazing resort and the capital of the Autonomous Region of the Azores. The city has many luxurious villas and beautiful churches that have been here since Ponta Delgada was a large and important port. Having arrived in Ponta Delgada, tourists usually enjoy swimming in thermal springs and visiting volcanic lakes, many of which are formed in the craters. Caldeirro Volcano, which has been extinct for many centuries, is one of the biggest points of interest in the area. Local volcanic lakes have water of different colors ranging from blue to emerald green. Needless to say, there are always many vacationers who come to see the lakes and relax at their shores.
A small village emerged on the site of the modern resort in 1449. Local people were mostly engaged in fishing. At that time, no one thought that the settlement would ever become the capital of the Azores. In 1546, a devastating earthquake happened in Sao Miguel. This disaster almost completely wiped the city off the face of the earth. This is how Ponta Delgada became the new capital of the island. The administration of Sao Miguel moved to the new location. As expected, Ponta Delgada started growing and developing rapidly. Its population was increasing fast too.
To prevent pirate attacks and protect the territory of the city from the enemy invasions, several fortifications were built in Ponta Delgada in the sixteenth and seventeenth centuries. The 19th century was a true period of prosperity for the capital city. Ponta Delgada became a major port in the well-established citrus fruits trade with Europe and Asia. Thanks to the source of continuous income, the city budget had enough funds to build dwellings, estates, and churches. Many of these buildings have survived to the present day, turning into the historic heritage of the resort city. Copyright www.orangesmile.com
Do you like beach recreation? There are no coastal areas suitable for swimming and sunbathing in the city. For this purpose, many locals and guests of the city prefer to visit Sao Roque Beach that is located approximately four kilometers from Ponta Delgada. The water temperature is twenty-two degrees in summer, so it is comfortable to relax on Sao Roque during the entire tourist season. Sao Roque Beach is a picturesque coastal area covered with black volcanic sand. As rocks safely protect this beach on all sides, the sea is always calm here. There are no high waves at Sao Roque, and this is the reason why there are so many parents with small children here. Professional rescue teams stay on the beach until the evening. 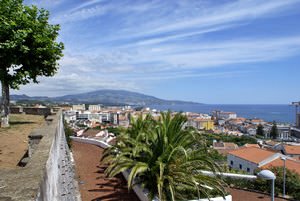 Fans of diving and surfing also have a suitable beach in Ponta Delgada – Milicias Beach situated five kilometers from the city center. Just like other beaches in the region, Milicias is covered with black volcanic sand. This coastal area has a fairly developed beach infrastructure with rental offices offering the equipment for a range of water sports and activities. The sea is clean near Milicias, so your underwater adventures are sure to leave many pleasant memories. The sea is shallow near the coast, so this beach is also suitable for visitors with children. Parents can let their kids play near the coast and do not worry about their safety. Even though the sand is very soft and a beach towel is enough here, visitors can always rent sun loungers.
Besides beach recreation, Ponta Delgada can offer its guests to visit several amazing natural attractions such as the Gruta do Carvao Caves. This is the longest naturally formed volcanic tunnel on the island. The length of the Gruta do Carvao Caves is one thousand ninety hundred and twelve meters. A transitional section, the length of which is seven hundred meters, is located between the caves. Scientists performed many studies in the cave and agreed that the age of this formation is between five and twelve thousand years. 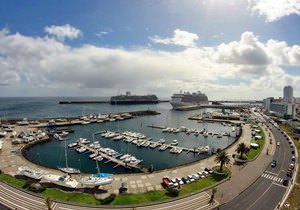 Initially, the length of Gruta do Carvao was more than five kilometers. Unfortunately, many tunnels were destroyed by rock slides, and so it is impossible to reach them anymore. Nowadays, many tourists visit Ponta Delgada every year, and the majority of them visits the caves to take a stroll in the stone corridors, see different types of lava, and take pictures with numerous stalactites that cover the entire ceiling of Gruta do Carvao. Visitors have one hour to explore the underground passages and look at the drawings left by previous visitors.
Not all countries in the world have direct flights to the capital of the Azores. If you cannot fly directly to Ponta Delgada, you need to take a connecting flight with a stop in a large European capital. Many tourists prefer to fly to Lisbon first. There is an international airport in Ponta Delgada. Upon landing, use the taxi or bus to get to the city center. Tourists are welcome to rent a car and explore the island independently. There are also special vehicles for tourists like panoramic buses and horse-driven carts. Special tourist trains offer excursions to the neighborhoods of Ponta Delgado.
This guide to iconic landmarks and sights of Ponta Delgada is protected by the copyright law. You can re-publish this content with mandatory attribution: direct and active hyperlink to www.orangesmile.com.

City tours, excursions and tickets in Ponta Delgada and surroundings

Search touristic sites on the map of Ponta Delgada

Sightseeing in regions nearby Ponta Delgada

Sao Miguel Island
The capital of the island is the city of Ponta Delgada; old streets survived there represent its main treasure. Strolling through the city, you can see beautiful buildings everywhere; most of them were erected in the 18th century. However, main sightseeing sites of San Miguel are its natural attractions. The starting point of many excursions is Sete Cidades lake. It’s ... Open »
Terceira Island
Terceira is a part of the Azores situated in the center of the archipelago. Many travelers know it under its informal name, the Purple Island. The island owes its second name to the unique nature, as almost all of its central area is occupied by the reserve. Numerous settlements are concentrated near the coast. Every local town and every village boasts a variety of interesting ... Open »
Azores
This group of islands in the Atlantic Ocean is a wonderful place of rest for the travellers who seek seclusion and silence. Each island is unique and has its own attractiveness. During their rest travellers can also get acquainted with local sights of the Azores. The oldest buildings and most beautiful lakes can be found on the biggest island of the archipelago – Sam ... Open »
Pico Island
Ilha do Pico Island is part of the Azores archipelago. It is a focus of unique natural attractions of world significance. The main symbol of the island is Mount Piko - an extinct volcano, as a result of whose activity the island appeared. The unique nature of the island is not the only feature of Pico. The diversity of fauna on the island and its coastal waters are amazing. One ... Open »
Graciosa
Graciosa is one of the most interesting and peculiar islands of the Azores. Incredibly beautiful landscapes, an abundance of miniature snow-white buildings, a picturesque coast and a pleasant atmosphere of tranquility and harmony - these are the main distinguishing features of the charming volcanic island. Graciosa has long attracted travellers, who love to be close to nature. ... Open »
Ilha do Faial
Ilha do Faial is the volcanic island situated in the heart of the Azores archipelago. It constantly attracts yachtsmen from all over the world, as well as fans of beach recreation and eco-tourism. Hydrangeas that can be seen literally everywhere are considered hallmarks of the island. Ilha do Faial owes its unofficial name, Blue Island, to its beautiful flowers. Ilha do Faial ... Open »

All about Ponta Delgada, Portugal - sightseeings, attractions, touristic spots, architecture, history, culture and cuisine. Prepare your trip together with OrangeSmile.com - find out the 'must see' things in Ponta Delgada, which places to visit, which excursions to take, where the breathtaking views are waiting for you. Planning your trip with this travel guide will help your to get the most out of Ponta Delgada in few days.