Sightseeing in Evora - what to see. Complete travel guide 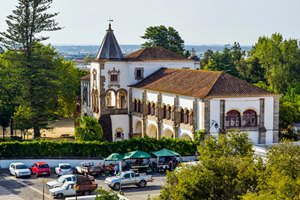 Gorgeous Evora is, without a doubt, one of the most attractive cities in Portugal. A stroll in the city center is an excellent chance to feel the atmosphere of the past. Every building, every plinth, and monument are full of interesting stories about the past of this region, and they are willing to tell these stories to curious travelers. The history of this settlement is really worth getting yourself familiar with, and so many tourists from all over the world visit this Portuguese city in order to see these “gifts” of the past, drink delicious local wine, and enjoy a variety of local cheeses and desserts. Besides that, when planning a visit to Evora, tourists should keep in mind that this is a settlement with a long history, a true spiritual center of the country.
The ancient Lusitanian tribes were the first settlers in this area. They founded the first settlement here and called it similar to the modern name of the city – Ebora. When the Romans captured this territory in the 80s BC, local people had nothing left to do but to ask help from Quintus Sertorius, a rebel Roman commander. He remained the ruler in this area for seven years. However, the Romans found a way to conquer the city and destroy Sertorius, and so Julius Caesar became the new ruler here. He remained the settlement to Liberalitas Julia. In 712, the Moors invaded the territory and changed the city’s name once again, calling it Yaburah.
Christian knights drastically changed the history of the city and ended the Moors’ reign. In 1128, Templars appeared in the region. Their main aim was to free Evora, and they succeeded in doing this in the 60s of the 12th century. King Alfonso wanted to thank the knights, and so he gave the city to them. The period from the 15th to the 16th centuries was one of the most prosperous for the history of Evora. This is when the first university appeared here, and the city was developing actively. The Spanish occupied Evora in the 17th century, and this event marked the beginning of the decline in the city. UNESCO added the city to the list of World Heritage Sites in the 20th century. Copyright www.orangesmile.com
Are you eager for something thrilling? Then don’t forget to visit the Capela dos Ossos or the Bone Chapel. This chapel is built next to the entrance of the Church of St. Francis that dates back to the 15th century. The name of the building might raise some questions. Simply visit the chapel and you will quickly understand why it was called this way. The thing is, all walls inside the chapel have a very unusual “decoration” made from human bones. These are the skulls and bones of monks that were used as a building material. In total, fragments of five thousand human bodies are used in the chapel. 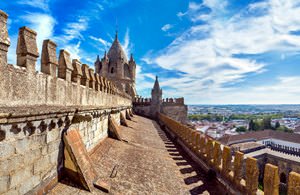 According to historic data, monks decided to build such a scary building as a reminder that death is inevitable. This was particularly true for the Middle Ages as the city had to cope with many troubles at that time. Attacks of alien forces and sudden plague epidemics were claiming many lives of local people. When there was not enough space for cemeteries, the monks decided to “immortalize” their fellow monks in such an unusual way. If you are attentive enough, you will see that there is an inscription on the arc, saying “my bones are already here, and you are next”. Bones of the dead people were treated with lime carbonate in order to make them whiter. Small and thin bones were crushed and added to the cement.
The Cathedral of Evora or Sé de Évora is a true gem of the city. The building of the notable architectural landmark started in the 80s of the 19th century and lasted sixty-four years despite the fact that the church was consecrated just eighteen years after the start of building works. This is a beautiful example of the Romanesque-Gothic style. Outside, the cathedral is reminiscent of a fortress. Due to its beauty, the Cathedral of Evora is widely recognized as the best medieval church in Portugal. No other church of this period in Portugal can compete with this cathedral in terms of beauty and grandeur. 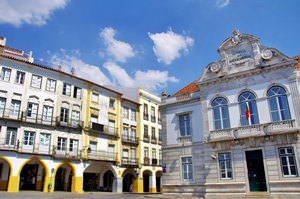 There is an old pipe organ in the cathedral. Surprisingly, this 16th-century musical instrument is still in a working condition and sounds amazing. The inner décor of the church is a beautiful combination of white, pink, and black marble. Beautifully made sculptures of the apostles adorn the façade of the cathedral as if they are protecting its towers. One of these towers now houses a museum with numerous religious artifacts. Visitors can see ancient costumes of priests, as well as other precious artifacts.
In order to get to Evora, tourists can rent a car or buy tickets to a bus or train. There is a railway station in the southern part of the city that has a direct connection to Lisbon. A train ride in this direction lasts one and a half hours or two hours at most. A journey from Setubal will be shorter, a bit longer than one hour, but you will have to make a change in Pinhal Novo. A bus ride from Lisbon lasts roughly the same time as a train ride. The most comfortable road for cars starts with road A2 and then continues with road A6 that heads directly to Evora.
This guide to iconic landmarks and sights of Evora is protected by the copyright law. You can re-publish this content with mandatory attribution: direct and active hyperlink to www.orangesmile.com.

City tours, excursions and tickets in Evora and surroundings

Survived castles around Evora
♥   Castle 'Castle of Viana do Alentejo' , 27.7 km from the center. On the map

National and city parks around Evora
♥   Nature Park 'Serra de São Mamede' , 97.6 km from the center. On the map

Search touristic sites on the map of Evora

Sightseeing in regions nearby Evora

Setubal
Located in a wonderful climatic zone on the slopes of low ridges, Setubal is adjacent to the Sierra de Arrábida National Park on one side, and to the Rio Sado River on another. This town is located not far away from the famous Troy peninsula. Setubal is founded on the ruins of an ancient Roman settlement named Cetobria. This place is famous for its attractive streets with ... Open »
Lisboa Region
The most important attractions of the region are located in the capital. Lisbon offers travelers a very rich and varied program of excursions. Its guests should definitely see the beautiful Castelo de São Jorge built in the early Middle Ages. No less impressive landmark is Sé de Lisboa, a true example of the Romanesque style. The latest large-scale reconstruction of the ... Open »
Lisbon
Lisbon is the main port of Portugal, which is located at the mouth of the Tagus River. This city is located in the picturesque place with numerous hills. That’s why Lisbon is also called "city on seven hills". Founded as a large settlement of the tribe of Iberian Lusitano, Lisbon has started its quick development due to its convenient location. After this it was soon ... Open »
Tomar
This picturesque town is situated on the bank of the Nabao River. First mentions of the city belong to the 12th century. According to one legend the first settlers of this place were the Templars, who built a fortress on a hill. Steadily new and new buildings appeared around the castle. Today only Charolais Church reminds of the past centuries. This church was built a few years ... Open »
Cascais
When sunbathing and beach rest become a bit boring to you, take a walk on cozy streets of Cascais. Houses here are small, but their design is truly unforgettable. They are decorated with carved balconies and ancient tiled roofs. These houses were built in the beginning of the century. Fort remains the most famous historical sight of the region. The building of the fort ... Open »
Merida
The first settlement on the territory of the modern city was founded in 25 BC and was used as a place of life for fired Roman soldiers. In those days the city was called Emerita Augusta in honor of its founder - the Emperor Augustus. Modern Merida attracts visitors by its amazing legacy of ancient times and peaceful atmosphere. One of the city's main attractions is a ... Open »

All about Evora, Portugal - sightseeings, attractions, touristic spots, architecture, history, culture and cuisine. Prepare your trip together with OrangeSmile.com - find out the 'must see' things in Evora, which places to visit, which excursions to take, where the breathtaking views are waiting for you. Planning your trip with this travel guide will help your to get the most out of Evora in few days.