Sightseeing in Tomar - what to see. Complete travel guide 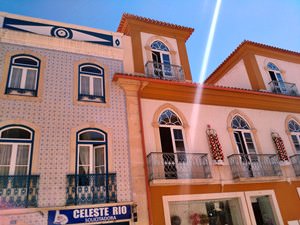 This picturesque town is situated on the bank of the Nabao River. First mentions of the city belong to the 12th century. According to one legend the first settlers of this place were the Templars, who built a fortress on a hill. Steadily new and new buildings appeared around the castle. Today only Charolais Church reminds of the past centuries. This church was built a few years after the building of the fortress. This is a magnificent building, which architecture is quite unusual for the Middle Ages. The tower has 16 facets, and so it is considered that the prototype of this church was the Holy Sepulcher located in Jerusalem. The inner halls of the church are decorated with gilded halls and beautiful hand-painted carvings.
The central part of Tomar is considered a historic district. Here have remained old narrow streets, on which you will see small shops and cozy cafes. The main shopping street of the town is Rua Serpa Pinto. Here you will find best shops that are full of attractive clothes, jewelry and perfume. The street will take you to Praça da República Square, which is the location of another major attraction - the church of San Juan Baptista.
In the entertainment program will surely include the visit to the local synagogue, which is located on Rua Dr.Joaquim Jacinto Street. It was built in the beginning of the 15th century and this is one of the oldest synagogues in Portugal. Nowadays the synagogue was converted into a museum named after the great scientist Abraham Zacuto. Not far away from this sight is located another remarkable cultural institution, Museum of Matches. There are not so many unique collections of matches around the world. The collection of the museum contains approximately 43 000 matchboxes, which have been imported from many different countries. Tomar has prepared much interesting for tourists, who will find here a wide choice of entertainments and excursions. Each day of rest in this beautiful town will be a unique and interesting one. Copyright www.orangesmile.com
An interesting historical symbol is the monastery of the Order of Christ. Its construction began in 1160. Currently, a unique huge old monastery is a landmark of world importance and is numbered among the world heritage of UNESCO. Its outward appearance resembles an ancient fortress. It was actually built as a fortification for warrior monks. Only later the huge stone building was converted into a monastery. 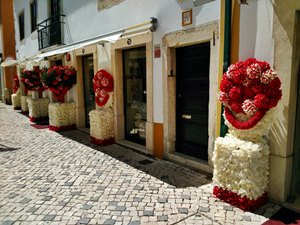 The beautiful church of Sao Francisco is a bright architectural monument of the early 17th century. It was built by order of King Philip III. The facade of the church looks quite modest, but its interior design amazes with luxury. Gilding finishing elements, decorative painting, wonderfully carved columns, and arches have been preserved there.
The old church of Santa Maria do Olival built in the 13th century has really fine features. This church looks quite miniature in comparison with other religious monuments. Despite numerous renovations, many of its original features have been preserved. The most beautiful item is a magnificent rosette window located above the main entrance. The statue of the Virgin Mary is the main value of the church. The statue was transferred there during the Middle Ages. 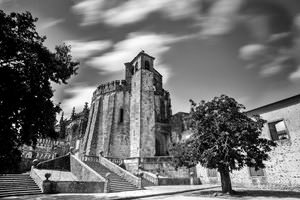 The Nossa Señora da Conceisao chapel is located in the immediate vicinity of the city. It is an architectural monument of national importance. Although the chapel is quite small, 35 years have been spent on its construction and design. The primary function of the chapel was originally quite unusual. It served as a tomb for the Portuguese king João III, who led the country in the 16th century. Today, the building is considered a classic example of Italian style in architecture. The walls of the chapel are absolutely smooth inside. Its main decorations are elegant windows with floral patterns and painting on the ceiling.
An ancient aqueduct has been preserved in the vicinity of the city. It used to supply the monastery of the Order of Christ with fresh water. The construction of the bridge began in the 16th century and lasted almost a hundred years. It has 180 arches and a length of 6000 meters. The aqueduct is located in a picturesque natural area, which is ideal for hiking.
This guide to iconic landmarks and sights of Tomar is protected by the copyright law. You can re-publish this content with mandatory attribution: direct and active hyperlink to www.orangesmile.com.

City tours, excursions and tickets in Tomar and surroundings

Survived castles around Tomar
♥   Castle 'Castle of Tomar' , 0.6 km from the center. On the map

National and city parks around Tomar
♥   Nature Park 'Serras de Aire e Candeeiros' , 36.2 km from the center. On the map

Sights around Tomar from our guide 'Extreme places on Earth' 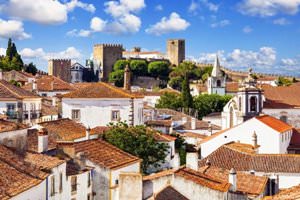 Distance from Tomar center - 69.7 km.
The marvelous Casa da Música Theatre and the Igreja de Santiago Church, built in the second half of the 12th century, are the most outstanding landmarks in the city. In the middle of the 18th century the church was absolutely ruined after the earthquake. Nevertheless, it was rebuilt in the shortest time. Today there has placed the city concert hall. The ancient Portuguese city Obidos is popular not only among the admirers of walks but also among chocolate gourmands. There have placed the most known chocolate fabrics of the country. Every year there is held the Chocolate Festival. … Read further

Search touristic sites on the map of Tomar

Sightseeing in regions nearby Tomar

Leiria
Leiria is a city in Portugal that is known as the center of the same named municipality. The town is located 119 kilometers north from Lisbon, the capital of the country. The population of the city estimates 42.8 thousands of people. Industries and manufacturing are almost not developed in the town. Some small factories that operate in the region are located in Leiria’s ... Open »
Coimbra
Coimbra is incredibly rich in various landmarks and historical attractions. Each of them has its own unique charm. Start your acquaintance with the city with a visit to a museum park that has a small version of the whole of Portugal. This is a small village that, nevertheless, shows how diverse and beautiful the country is. Established in 1940, the park features all major ... Open »
Lisboa Region
Lisboa is a vast region in the western part of Portugal, whose capital is the city of the same name. The region is known to travelers, primarily due to an abundance of attractive beach resorts. The so-called Lisbon Riviera annually attracts hundreds of thousands of travelers; however, fans of excursions visit the region too. The most important attractions of the region are ... Open »
Lisbon
Lisbon is the main port of Portugal, which is located at the mouth of the Tagus River. This city is located in the picturesque place with numerous hills. That’s why Lisbon is also called "city on seven hills". Founded as a large settlement of the tribe of Iberian Lusitano, Lisbon has started its quick development due to its convenient location. After this it was soon ... Open »
Aveiro
When taking a stroll along Cais dos Botiroes, it is impossible to fail to notice beautiful buildings that rise proudly along the canal. All these buildings are not tall and have two or three floors. However, bright colors make these buildings truly unique. There are no buildings painted in one color. Walls have bright yellow shades, window frames are blue, and roofs are red. ... Open »
Evora
Gorgeous Evora is, without a doubt, one of the most attractive cities in Portugal. A stroll in the city center is an excellent chance to feel the atmosphere of the past. Every building, every plinth, and monument are full of interesting stories about the past of this region, and they are willing to tell these stories to curious travelers. The history of this settlement is ... Open »

All about Tomar, Portugal - sightseeings, attractions, touristic spots, architecture, history, culture and cuisine. Prepare your trip together with OrangeSmile.com - find out the 'must see' things in Tomar, which places to visit, which excursions to take, where the breathtaking views are waiting for you. Planning your trip with this travel guide will help your to get the most out of Tomar in few days.