Detailed hi-res maps of Krk for download or print 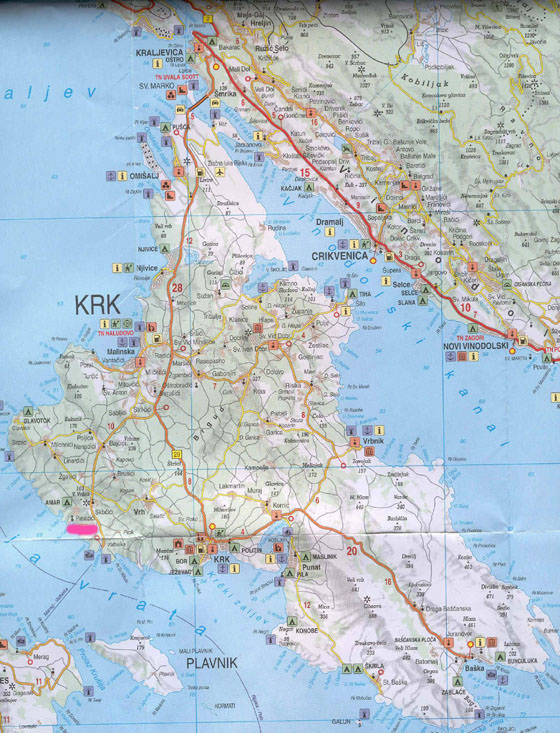 Search for services, infrastructure and sights on map of Krk

Our guide chapters over Krk

Konobas located in the picturesque town of Malinska are very popular. Porat and Bracera are the most famous taverns there. The well-known restaurant Galtb is situated on the central square of Krk. Its convenient location and an extensive menu have made it one of the most popular dining places on the island. In the immediate vicinity of Baska there is the Volta restaurant; it would surprise not only with wide choice … Open

Tourists who visit the island in late May will also have an opportunity to witness an interesting holiday, the annual Wine Festival. It has long been an integral part of the culture, as almost every family makes a great house wine. The festival is attended by the best restaurants and wineries of Krk; the main center of the festival is still the same square at Frankopanska castle. Besides drinking local wines, … Open

Travelers having an opportunity to visit Punat should certainly take a chance and take a boat trip. In this city, there is the largest yacht port in Croatia. Tourists can take interesting trips of various durations here. During such a boat trip, many attractions of Krk Island seem very different. Local restaurants of the national cuisine are very popular with gourmets. They are called konobas and are very … Open

The small Komoriska Beach, whose length is no more than 30 meters, would be a very pleasant place to stay. Close to the coast loom thickets of pine trees, where you can find shade from the hot sun. The beach is popular among older couples; there is always very calm atmosphere suitable for peaceful rest in its territory. Sandy beach Meline is the biggest in the island. Its visitors are recommended to take sun … Open

5. Tourists who want to go for a picnic to one of the picturesque forests are recommended to contact one of the local tourist office or hotel staff. The fact is that not all the local forests and nature reserves are suitable for free recreation; however, trips to the most beautiful and affordable places to stay are arranged for tourists. 6. No matter what time of year you would have a trip, it’s advised to … Open

Exciting boat trips and visits to the most beautiful natural places are arranged at the port of Punat. Nightlife fans would like vacations in Malinska, where the most noisy and large discos are situated. The most popular venue is Crossroad; it provides a huge bright dance floor and a comfortable seating area. Boa is considered the most stylish nightclub; this is an ideal place for those who prefer to spend time in … Open