Cuisine of Krk for gourmets. Places for dinner - best restaurants 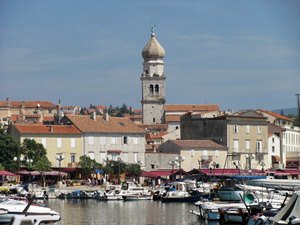 The largest island of Croatia doesn't lack interesting culinary traditions and great restaurants, so even the most demanding gourmets would enjoy holidays on Krk. The gastronomic specialty is represented by konobas, small family taverns, where you can taste the most popular national specialties cooked following classic old recipes. It's worth noting that taverns always have a very attractive design that makes the stay even more enjoyable.
Advices to travellers: what you should know while being in Krk
1. It won’t be difficult to get to the island from mainland, as they are bound by an ultramodern bridge, which is also considered an important architectural landmark. The island can …

Open
Many local restaurants have being operating on the island for more than a decade. Cooking recipes are kept in strict secret and are passed from generation to generation. Common local food is represented by meat and fish grilled over an open fire; local chefs prefer to cook vegetables as garnish to the main dishes.
National cuisine impresses travelers fascinated by Italian cooking, as one of the most popular treats is homemade pasta with seafood. Meal will be offered with a fine glass of house wine. Winemaking is also one of the main secrets and distinctive features of the local cuisine; each national restaurant certainly has its own wine cellar. Copyright www.orangesmile.com
Best beaches and recreation areas around Krk
Malinska situated to the west of the island is the busiest and the most attractive beach resort. It attracts travelers with its large-scale sandy beaches, incredible Mediterranean views and …

Open
Konobas located in the picturesque town of Malinska are very popular. Porat and Bracera are the most famous taverns there. The well-known restaurant Galtb is situated on the central square of Krk. Its convenient location and an extensive menu have made it one of the most popular dining places on the island. In the immediate vicinity of Baska there is the Volta restaurant; it would surprise not only with wide choice of delicacies, but also with affordable prices. 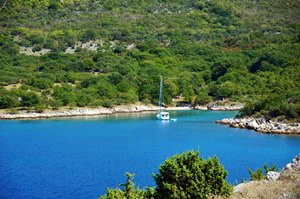 Fans of other culinary traditions won’t be limited in choice, as there are diners of other cuisines on Krk. However, one of the major drawbacks of local dining places is its schedule; not all restaurants serve visitors until late in the evening. Anyway, prices in restaurants of Krk are more than attractive, so even the most budget-conscious travelers can feast there.

This guide to cuisine and restauraunt in Krk is protected by the copyright law. You can re-publish this content with mandatory attribution: direct and active hyperlink to www.orangesmile.com.
Krk - guide chapters 1 2 3 4 5 6 7 8

Distance from Krk center - 59.4 km.
In Croatia, the most famous and well-preserved amphitheater is to be found in Pula. The construction of the ancient monument had been lasting more than forty years and was completed in 68 AD. Nowadays, it is a permanent venue for theatrical performances, military ceremonies, public gatherings and enchanting concerts. The antique monument is perfectly preserved to this day. All three Roman orders and four towers have miraculously survived. In scale the largest amphitheater in Pula takes the sixth place in the world. … Read further 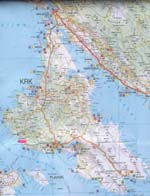 Searching where to eat - restaurants and cafe on Krk map

Cuisine and restaurants in the neighbours of Krk

Cres
Cutlet and escalope are the most popular dishes that are served for dinner. There are many meat dishes on the island. Meat can be just fried and also fried in breadcrumbs. The second type of meat is called šnicle (schnitzel). Fried meat in a dough is called Prague schnitzel and schnitzel with cheese and ham is called Zagreb schnitzel. Goulash is usually served here with ... Open »
Rab Island
When ordering fish courses, pay attention to the price – it can be indicated per serving, per 100 grams or per kilogram. It is clear that in the last two cases, the sum in the check will be totally different than in the menu. Among fish, you can try catfish, dorado, sea carp, fish-devil, also known as shkarpena, sea bass, flounder, red mullet, horse mackerel, and scomber. ... Open »
Opatija
The Galeb restaurant is located on the premises of a famous hotel. The restaurant features not only excellent menu but an original styling of the interior. During the meal the guests of the eating house may enjoy vibrant views from floor to ceiling windows. A hall of the restaurant features elegant designer furniture. The Galeb restaurant offers its visitors best dishes of ... Open »
Losinj Island
Traditionally Croatian dish, which is certainly worth trying on Losinj, is prosciutto. In the process of smoking and drying, the ham acquires a truly unusual taste – many travelers buy this delicacy to bring back home. Another local meat dish is Pasticada, beef marinated in red wine with herbs, to which they add prunes, nutmeg, and carrots with onions. They usually serve ... Open »
Istria
Fans of meat would be impressed by culinary traditions of Istria, because it is producing a well-known prosciutto. The unique taste quality of this smoked ham is directly dependent on the ageing; some types of ham can withstand up to two years. The meat is cut into thin slices and served with feta cheese, olives and herbs. Sheep cheese is also a quite bright culinary symbol ... Open »
Pag Island
Cutlets are usually served on dinner and supper. Fried meat is very popular on Pag. Fried meat in the dough is called Prague schnitzel and schnitzel with cheese and ham is called Zagreb schnitzel. Goulash is usually served here with pasta. Beef with plum and wine is a delicious meat dish too. Turkey with mlinci (flat pasta, soaked in roast juices) is very popular in Croatia. ... Open »

Travel notes on best cuisine and restaurants of Krk (Croatia) on OrangeSmile.com. Famous recipes and traditional dishes and courses in Krk restaurants. Where to eat - our recommendations on popular places in Krk, where you can taste delicious meal and also spend a good time with your friends.