Detailed hi-res maps of Rijeka for download or print 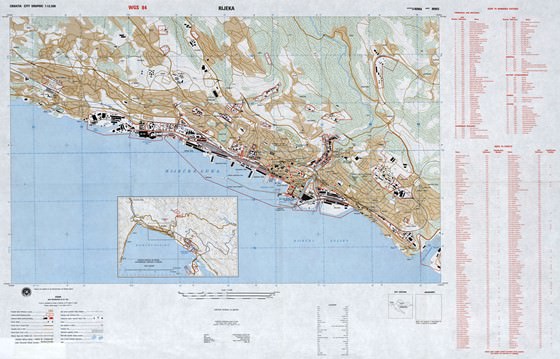 The actual dimensions of the Rijeka map are 5123 X 3285 pixels, file size (in bytes) - 3489139. You can open this downloadable and printable map of Rijeka by clicking on the map itself or via this link: Open the map. 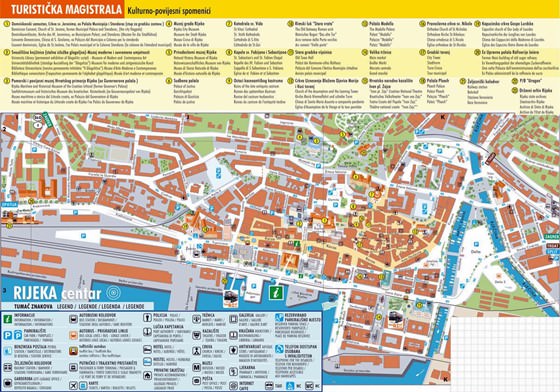 The actual dimensions of the Rijeka map are 1200 X 839 pixels, file size (in bytes) - 336485. You can open, download and print this detailed map of Rijeka by clicking on the map itself or via this link: Open the map.

Search for services, infrastructure and sights on map of Rijeka

Our guide chapters over Rijeka

The central part of the city, which is called Korzo, is the most notable in Rijeka. There is absolutely no transport here and all streets are pedestrians only. During your walk in this city you will be able to see most popular shops and restaurants, visit new movie theaters, or simply relax in a park. One of the most colorful markets of the city is also located here. Visitors usually adore traditional gifts of … Open

You can admire exciting historical artifacts at the Rijeka City Museum. Its opening was held relatively recently, in 1994. The museum stores historical documents and exhibits devoted to various periods of its development. Of special value is a collection of antique jewelry. All these ornaments once belonged to famous townspeople. A collection of old theatrical costumes, which were previously used in the local … Open

Maps of Krk
Travelers who want to learn a lot about the history and culture of the island of Krk are recommended to visit it in late December. Every year before the start of the New Year, Medieval Festival is held in the capital of the island. Celebrations take part at the central square of the town of Krk, Velika placa. This beautiful festival is dedicated to the patron saint of the city, ... Open »
Maps of Istria
Istria will surprise fans of event tourism with a wide selection of interesting themed events. Summer is considered the festival season on the peninsula; this time colorful festivities come literally one after another. A considerable part of the most popular festivals are held in Porec; the city has remained a permanent venue for Zlata Sopela Festival for many years. Festive ... Open »
Maps of Porec
Festival Dzhostra is prominent event in the city’s cultural life, visit of this festival is like real travel to past. People dressed in old aristocratic suits, brave knights and adroit juggler – owing to all the unrepeatable atmosphere of the Middle-Ages covers the city’s streets for a few days. Beautiful national music sounds in the streets and squares, there are ... Open »
Maps of Rab Island
Local women often become leaders in the family and at work, although there are plenty of women who prefer a career as housewives and want to feel comfortable. It is in the blood of any Croat men, to show his attention to any woman. So if you travel around the island by yourself, then you will definitely not lack compliments and a large dose of flirting. In the evening, the ... Open »
OrangeSmile.com - online travel reservation expert providing reliable car rental and hotel booking services. We feature more than 25.000 destinations with 12.000 rental offices and 200.000 hotels worldwide.
Secure Server