Detailed hi-res maps of Rovinj for download or print 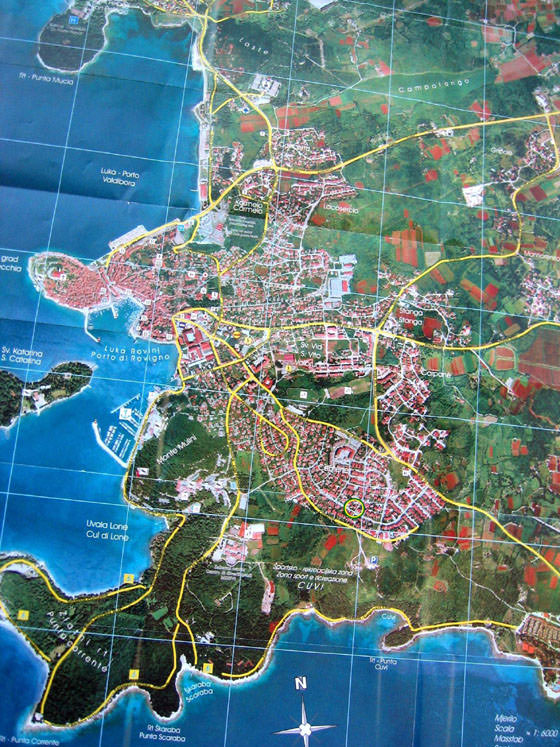 Search for services, infrastructure and sights on map of Rovinj

Our guide chapters over Rovinj

The destination offers a variety of good places to rest and entertain for party fans and exotic cocktails admirers. Several attractive night clubs and bars are located near the seaside and in the main streets. The Valentino Cocktail & Champagne bar regularly presents engaging entertainment program for its guests. Wide assortment of drinks, friendly atmosphere, well chosen music and original theme parties turn this … Open

Rovinj will please foreign guests with a variety of Croatian restaurants and numerous gastronomy establishments of other culinary trends. The Tipico restaurant offers its guests to enjoy excellent treats of ethnic cuisine at rather attractive prices. In a warm season the guests can take a table on a scenic open air terrace. In addition to tasty ethnic delicacies the restaurant offers excellent home-made wine. The … Open

The most beautiful pedestrian street of Rovinj is Karera. It is located on the territory of the Old Town. This little picturesque street paved with cobblestones, is framed by beautiful historical buildings on both sides. Many buildings house restaurants of national cuisine, art and craft workshops, and souvenir shops nowadays. In summer, all local institutions work until late at night. The Church of the Virgin … Open

3. Shops are usually open at 8 am at the latest, and work till 8 pm. Sundays and Saturdays are commonly the shortened working days, some small shops can be closed these days. During the tourist season shops can change their working schedule fitting in tourist demands. 4. City guests have an opportunity to rent a car. To rent a vehicle one will need international driving license. Some renting centers … Open

The old house once belonged to a local forest-guard, is now renovated and its décor of previous years is completely renewed. Beautiful antique furniture, unusual household stuff and original jewelries are presented in the museum’s manifold collection. The museum is embraced with a marvelous forest, so after the exhibition exploration tourists can enjoy hiking in a serene scenic area. Franciscan monastery hosts … Open

This is one of most romantic cities in Croatia, which is often called "the pearl of the north". Right from the first moment you will be enchanted by cozy streets, beautiful and unusual houses, and fabulous malls, as well as by hospitality and openness of the local people. The city has prepared many surprises for its guests. You will find here numerous places for walks and excursions, so you will certainly not get … Open

Maps of Porec
This festive is gone off in the middle of July, people who want to introduce with local cultural traditions will like it. In July there is colorful Tango Festival; during this festival local and foreign dancers demonstrate their talents. The majority of events are in open-air format, entrance is absolutely free. This festival will be perfect for people who have always wanted to ... Open »
Maps of Istria
The picturesque town of Pula is a permanent venue for the major film festival; cinemagoers and filmmakers visit it in July. The festival takes place simultaneously with the Opera Music Festival that would be interesting even to those who have never been interested in opera singers. Istria is ready to offer its guests a lot of exciting recreational opportunities. Travelers may ... Open »
Maps of Krk
Besides drinking local wines, festival guests are invited to taste great local cheese and honey, as well as to buy amazing handmade souvenirs. This holiday won’t be complete without exciting jousts; there are interesting staged battles, concerts and other entertainment events on the square. The picturesque island of Krk is the ideal place for those who prefer event tourism ... Open »
OrangeSmile.com - online travel reservation expert providing reliable car rental and hotel booking services. We feature more than 25.000 destinations with 12.000 rental offices and 200.000 hotels worldwide.
Secure Server