Detailed hi-res maps of Rab Island for download or print 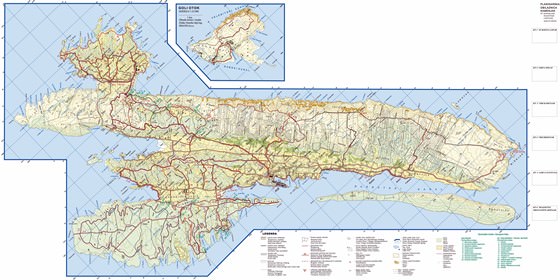 The actual dimensions of the Rab Island map are 4538 X 2268 pixels, file size (in bytes) - 2153549. You can open this downloadable and printable map of Rab Island by clicking on the map itself or via this link: Open the map. 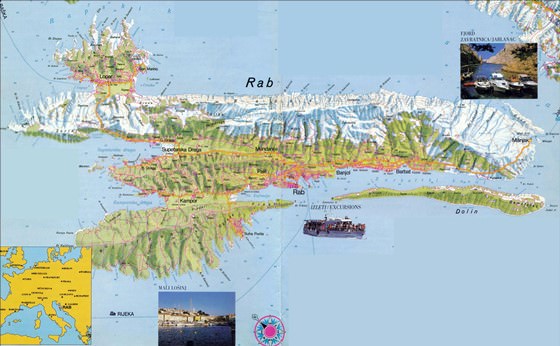 Search for services, infrastructure and sights on map of Rab Island

Our guide chapters over Rab Island

In total there are more than 20 charming sandy beaches at Lopar resort. Almost all of them are shallow, so water of the coast warms quickly. Another attractive place for a family holiday is Pudarica Beach. It's located in the southwestern part of the island, in the small holiday village of Barpat. The coast is covered with gravel, so you can relax comfortably even without a special beach shoes. Pudarica is the … Open

A rather unusual and very interesting souvenir is also a copy of the Vucedol dove. This vessel was once used in traditional Croatian rites, and now it is sold to tourists as a symbol of the preservation of national customs. If you want to purchase a Dove, remember that it is quite fragile and requires very careful handling. Another interesting purchase on Rab is a tie. Yes, a tie. The fact is that for the Croats … Open

Rab Island for children - what to visit

On Rab, you can find rocky, sandy, and pebble beaches. Kids especially like the sand, therefore Rajska beach near the Lopar village on the north of the island traditionally attracts a large number of travelers with children. With a small child, you can go to the small-pebbled Pudarica beach not far from Barbat. The water here is clear, the descent to the water is gentle, the depth is small, and there is a lot of … Open

The most famous nudist beach in the region, Kandalora, is located not far from Palit. It is important to mention that this beach became one of the first nudist beaches in Croatia, and it has managed to keep its popularity and honorable statues through decades. One of the most romantic beaches of the region is located not far from the village of Supetarska Draga. It is located in the northern part of the island, at … Open

Traditions and mentality of Rab Island

If you have asked a Croat for something, remember that here, on the one hand, they do not like to refuse, and, on the other hand, they like to postpone everything for the mythical “tomorrow”, which never comes. In general, the Croats are people of contrasts. They are not too punctual but they expect punctuality from the others. They are completely unreliable but if they do something, they do it very quickly … Open

Croatian cuisine is known for its passion for alcoholic beverages, especially wine, and therefore, you should order at least one glass of this grape nectar for a truly local dinner. There are many wines here, so you should better ask the waiter, which one will suit the dish you ordered best. If you want to try the soup, then note that most of the local first courses are quite light and are prepared on the basis of … Open