Preparing your trip to Simferopol: advices & hints - things to do and to obey 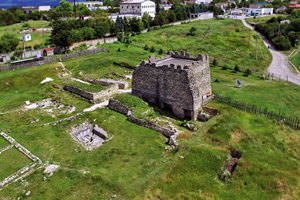 1. You can get to the city center from the airport by trolley bus route 9 or any of the numerous taxis. The city has excellent public transport system; buses and trolleybuses can literally get to any area of interest.
2. Day trips to nearby cities and resort areas are very popular among tourists; neighborhoods can be reached by train. A trip to Sevastopol and Yevpatoria will take more than two hours and a journey to Bakhchisarai would take little more than half an hour.
3. In addition to public transport, taxi service is available for travelers at any time. The car can be called by phone or found on special parking spaces on the street; latest are usually close to major attractions and entertainment venues. Be sure to bargain with a taxi driver and negotiate the price before getting into the car.
4. In the city you can find a huge number of attractive restaurants, the prices in which will satisfy even the thriftiest travelers. Local shops also feature attractive prices for goods.
5. The high tourist season is from May to September, this time is the best for sightseeing and excursion trips. In summer it’s better to book a hotel in advance, otherwise all affordable rooms can be occupied. Copyright www.orangesmile.com
6. It is essential for holiday-makers to observe basic safety cautions. Don’t use services of private individuals, as it is likely to become a victim of fraud. In no case your belongings should be left unattended; going for a walk, it’s better to take just a small amount of cash.
7. You can safely walk along the central area of ​​the city even late at night, as it is always very busy and noisy. The historic district of Simferopol isn’t a best place to take stroll in the night; it would be better to explore it during the day accompanied by a tour group.
Guide to Simferopol sightseeing - things to see and to visit
Simferopol is one of the largest cities in the Autonomous Republic of Crimea in Ukraine. The city is located between the Inner and Outer chains of the Crimean Mountains in the valley Salgir …

Open
8. Those who like quiet and secluded places are recommended to plan a trip in late autumn or spring, when there aren’t so many tourists in the city. In winter there is a very favorable weather, and many of the local hotels provide attractive discounts for their customers.

Preparing your trip to Simferopol: advices & hints - things to do and to obey You can re-publish this content with mandatory attribution: direct and active hyperlink to www.orangesmile.com.
Simferopol - guide chapters 1 2 3 4 5 6

What to visit being in Simferopol - unique sights

Distance from Simferopol center - 47.1 km.
Tourists visit this place for the sole purpose - to admire the ruins of majestic palaces and ancient Christian churches, and stroll through the narrow survived streets of the city. Not long ago, Crimean monks took the initiative to restore the ancient Christian monastery and the monastery church at Mangup Kale plateau. A few years later, the ambitious project was put into action. Today there is a functioning monastery of the Annunciation, where only one person, the abbot Iakinth, resides. … Read further

Distance from Simferopol center - 54.7 km.
In the 17th-18th centuries, the cave monastery began to attract the attention of royal personages. It was visited by Catherine II, Princess Maria Alexandrovna and Tsar Alexander III, as well as other members of the royal family. Today, the cave monastery is a tourist attraction of national significance. After renovation, it looks incredibly impressive. For decades, archaeologists continue to work close to the monastery. Tourists will be able to see other early Christian artifacts in this wonderful historic district. As scientists believe, more than 1 500 years ago, one of the world's largest Christian communities could be situated there. … Read further

Tips for the cities around Simferopol

Alushta
4. Do not buy food on the beaches with hands, it is also very risky. It is best to take suitable food with you or go to one of the local cafes. All fruits and vegetables bought in the market or in the store must be washed thoroughly. 5. A real find for holidaymakers will be small street tents and cafes, in which chebureks and a lot of other popular treats are sold. ... Open »
Hurzuf
4. Fans of beach holidays should take into account that not all local beaches are free. Some parts of the coast belong to local sanatoriums; you can rest on such beaches only at an additional cost. Those who do not like to rest in noisy and crowded places will like paid beaches. 5. One of the main values ​​of the resort is its unique nature. On the territory of some ... Open »
Yevpatoriya
4. Exchange of currency is recommended only in banks or private exchange offices, and from private services it is best to refuse - there is a high probability of becoming a victim of scammers. Fans of beach holidays should not forget that the sun in Crimea is very hot. Going on a trip, you must take with you all possible means of protection from the sun. They should also be ... Open »
Anapa
4. The Eastern market is ideal for buying fresh food at an affordable price; there is a very large selection of different vegetables and fruits. For clothes and memorable souvenirs, it is best to go to the North market and it is better to buy gold and jewelry in the shop "Rubin", which is located near the Central Market. 5. Travelers who arrive at Anapa airport get to the ... Open »
Odessa
4. Only central streets of the city are safe and sound for night tours meanwhile the remote areas of the city should be explored only in the daytime and only with a guide. Setting off to the city exploration one should not keep valuables by oneself without any need. 5. In public places one should be cautious and beware of pickpockets who are the main problem of the city. ... Open »
Gelendzhik
4. Travelers, who are used to rest at the highest level, should definitely pay attention to small private boarding houses and hotels. In many of them, the service and range of services is not inferior to the most refined hotels, and the prices for accommodation are the most affordable. 5. For tourists going on vacation in a large company, the best option for accommodation ... Open »

Travelling to Simferopol - advices and tips. What should be provisioned in advance, the rules you might want to follow, and the things you better avoid doing in Simferopol. We help you to make your trip smooth and easy, with no unexpected surprises.