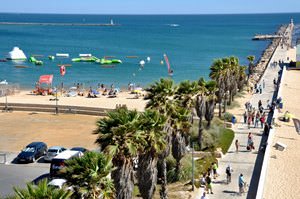 The modern economy of Portugal may well be called highly developed, although all the other countries of the European Union in recent years are afraid of serious reforms that are being conducted in this country. Today, there are only 2 critical problems in Portugal. The first problem is the existence of a huge number of privatized enterprises, and the second is the low level of education. To date, the predominant industries in Portugal are the production of clothing and footwear, the manufacture of pulp and wood products, as well as the processing of metals, petroleum products, and chemicals. The main assets of industrial plants operate in the southern regions. Here you can find steel, chemical-technologies, food, oil refining, and even automobile factories.
For active traveler - national parks, landscapes and nature of Portugal
Portugal is clearly divided into the northern wooded and southern plains parts. The south of the country is characterized in its appearance by the …
Read further
In the northern regions, the consumer goods industry is developed. Portugal is rich in various ores. To date, the deposits of chromium, tungsten, uranium and tin are actively being developed. These metals are mostly exported. Portugal continues to actively develop agriculture. The main crop here is wheat. It is being cultivated in the south. Corn, barley, oats, rye, beans, and rice are grown in the north. The greatest food demand in the modern market of Portugal is for potatoes, so it is grown throughout Portugal.
In the river valleys, as well as in the Algarve region, there are excellent vineyards, thanks to which winemaking has been actively developed. Currently, Portugal is one of the main countries in Europe, which exports wine throughout the world. Muscat wines, port wine, as well as various sorts of dessert rose wines are the most popular exports. Due to the territorial location of Portugal, fishery is developed here too. In the coastal waters, there are anchovies, sardines, tuna and cod. Statistics show that one third of the country is covered by forests. This gives the woodworking industry an opportunity to actively flourish. The most valuable in Portugal is cork oak and pine, from which products are manufactured and exported to various countries around the world. However, the pulp industry is based on imported product. For the production of paper, eucalyptus is imported from Australia. Copyright www.orangesmile.com
Best visiting periods - the climate of Portugal
The Mediterranean climate is dominant in Portugal. The ocean has a huge influence on its formation. Air masses coming from the ocean make the …
Read further
Tourism is an important activity in Portugal. Every year, more and more travelers come to the country. Consequently, high-class hotels and hostels are being built, and the service sector is developing. The transport system in the country is poorly developed. Today, there are only 35,000 kilometers of railways in the country, of which about 1,000 are electrified. The length of highways with a hard surface is about 60,000 kilometers. Sea transport is mostly used for transportation to the mainland from the island. However, the tonnage of the marine fleet does not exceed 1.2 million tons. 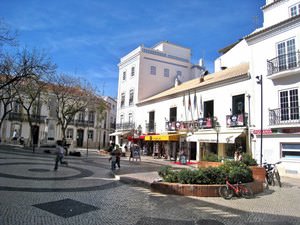 The majority of the revenue in Portugal comes from trade. The main products that go abroad are clothes, as well as ready-made textiles, wine, woodworking products, timber, ships and electrical equipment. The main import items are the initial raw materials for the operation of the industrial and food sectors. The main trade partners are France, Great Britain, and Germany. In 1991, Portugal became the poorest country among the European Union. However, significant investments made it possible to revive the country’s economy.
Overview of the optimal transportation means in Portugal
The transport infrastructure of Portugal is at a decent level. Most of the transport companies in the country are private owned. Due to constant …
Read further
In terms of fuel and energy index in Portugal, there are no problems. The average consumption of primary energy resources is about 30 million tons of oil equivalents. A large energy input is made by hydroelectric power stations. According to data of last year, the country produces more than 47 billion kilowatts per hour. Today, the standard of living in Portugal allows it to occupy a worthy 23rd place in the world ranking. Despite this, the wages here on average, are lower than in other countries of the European Union; about 650 Euros. The GDP growth is 2.6%, while the private incomes of citizens have grown by about 1.5%. Unemployment in the country is one of the lowest among the countries of the European Union and is about 4%. Inflation according to last year’s data is 3.6%. The largest contribution to the GDP of the country is income from the services sector; more than 66%. About 30% comes from industry and about 3% from agriculture. 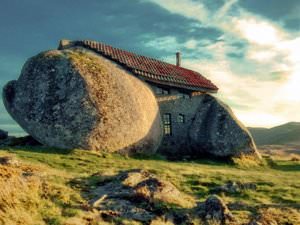 The hikers can see the unique stone house in Portugal. In contrast to millions of other houses, it was not built 'out', but 'in' the stone. The house is located in the picturesque mountain area, not far from Fafe city and was still built in 1974. The huge stone has excited the attention of the resourceful construction workers more than forty years ago. They decided to save the money for the building materials chiseling out the rooms in the stone. The realization of the original project has required a lot of time and energy.

The unique house is two storey, on its first floor is the spacious living room with the fireplace. The tiled roof protects the stone house from the storm. And through the original asymmetrical windows, which were manually carved out, the residents can graze in the … Read all
All unique sightseeing Portugal

Lisbon
In terms of design, Centro Vasco da Gama is considered the most beautiful in town. Many people come here just to admire extraordinary designer installations. On the ground floor, customers will find is a popular supermarket, next to which there is a food court. This shopping center is dominated by shops of inexpensive brands so even thrifty visitors will enjoy shopping here. Wealthy travelers who prefer the most prestigious and famous brands should pay attention to Stivali Shopping Center. … Read more

Aveiro
For the latest fashions and accessories, head to Glicínias Plazaю It houses shops of the world's most famous brands, including the largest H&M store in town. Many local shops are aimed at fans of a bright youth style. Ladies will also be interested in visiting lingerie shops located here. Active tourists are attracted by a large selection of sporting goods stores. This shopping center also has a large supermarket. Aveiro Retail Park is one of the smallest shopping center, which doesn’t … Read more

Albufeira
You'll find some large shopping centers in the city, the most popular one is Centro Comercial Modelo Albufeira. In this shopping complex there are dozens of brand clothes and shoes stores, which ptovide large sales several times a year. Representatives of gentle sex will be interested in visiting perfumery shops. The center includes some large shops with goods for children. If the range of goods will not be enough, you're welcome to Algarve Shopping Mall, which is located in the immediate … Read more

Porto
One of the most beautiful book stores in the world, Livraria Lello, is also open in Porto. Even travelers who are not keen on books are still recommended to visit it. The opening of this shop took place yet in 1906. The design of Livraria Lello has almost not changed since then. In this bookstore, visitors will find thousands of books on different themes. Beautiful calendars, postcards and tour guides – you will find all these and much more in the fantastic Livraria Lello. The historical … Read more

Lagos
Surf fans will have the opportunity to visit Lagos Surf Center Surf Shop offering all the necessary accessories for those who are keen on this sport. Here you can buy literally everything you need, from surfboards to men's and women's athletic swimwear. This store is also visited by ordinary tourists, as it presents a huge selection of inexpensive colorful T-shirts with national symbols, beach shoes and other stuff for those who like to spend a lot of time on the beach. One of the most … Read more

Vilamoura
Repto Streetwear store is especially loved by young people. It offers items of the popular Portuguese brand. The store delights with a huge choice of trendy things. There are always youth T-shirts, jeans, original headdresses and stylish accessories. Many tourists go to Sweet Vila store for unusual souvenirs. They sell handmade crafts, wonderful hand-painted boxes, and craft stuff from clay. Yet, they have traditional glorious faience tiles. In the immediate vicinity of the resort is the … Read more

Braga
Ladies should definitely visit By Heart store, which is clearly one of the most original in Braga. This store is entirely intended for women. It offers beautiful romantic handmade souvenirs. The choice of goods is enormous, from miniature pink heart-shaped cards to original sculptures and chic handmade jewelry. This store is sure to please those who love exclusive things. Equally attractive is Loja do Cabaz store. It offers its customers exclusive gifts and handmade souvenirs. Literally, all … Read more

Cascais
There are many attractive souvenir shops in the city, and Solinverno is one of the most popular ones. Among the variety of souvenirs, it's worth noting wonderful gift cards, which cost about 0.30 euros a piece. Many tourists say that in this store they find more interesting and beautiful postcards with the views of popular attractions than in popular souvenir shops in Lisbon. Active tourists and sports fans will be happy to visit Fashion sport store. It sells excellent sports shoes at very … Read more