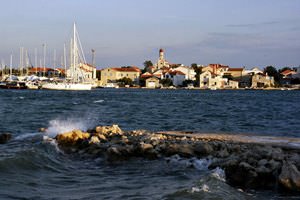 Murter Island first appeared on the pages of history in the 14th century. It was firstly mentioned in the written sources at those times. However, scientists are convinced that people lived here long before this date. The evidence was found near Gradina hill. The ruins of an ancient Roman settlement Colentum are located here. Presumably, the city was captured and destroyed by pirates in the 2nd century AD and the survivors did not want to restore their homes, they just left the land. Despite the venerable age, the Colentum can tell a lot about the life of the ancient Romans here.
Top hotels in Murter for business trip or short vacation
One of the attractive features of Murter is a great choice of hotels. Each of them is characterized by hospitable atmosphere and unique national peculiarities. The most popular place on the …

Open
The Church of Our Lady is located close to the ruins. It was built in the 17th century on the place of an ancient church of the 6th century. This is evidenced by the remains of an old wall with patterns of crosses, characteristic of those times. Saint Michael's church is also a beautiful cult building. The exact time of its construction is unknown but there is no doubt that it was reconstructed in the 18th century. Its Baroque altar looks impressive.
Tisno town is the closest settlement to the mainland. It was built in the 15th century and residents decided to build a bridge that would connect the island with the coast. However, the threat of pirate raids and discontent of the islanders slowed down this project. The building of the bridge had started after the fall of the Venetian Republic. Its construction was stopped because of the protests of other residents of Murter for several times. They feared for their safety but the construction was finally completed. The bridge has undergone several reconstructions. The latter reconstruction was in 1991 when it became a drawbridge. Copyright www.orangesmile.com
Shopping in Murter - main shopping streets, outlets and boutiques
During your holidays on Murter, be sure to buy Morcic jewellery. In the Middle Ages, Morcic jewellery was made of burnt to black wood and it was given as a gift for sailors for luck. People …

Open
The parish Church of the Holy Spirit is an interesting example of Baroque island architecture. It was built in 1548 and twice reconstructed in 1640 and 1840. The church was rebuilt and expanded both times. A bell tower was built next to the church in 1684. The Church of the virgin Caravaggio, built in the 18th century by Italian masters, is also amazing construction. The Church of St. Martin was built in the 13th century on the ruins of an early Christian Church. You can visit Tisno and admire a modern memorial dedicated to the victims of the regime of Communist Yugoslavia. 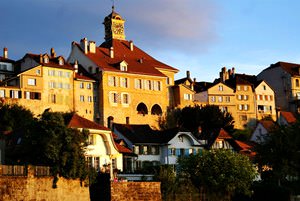 Betina is another old settlement on the island. It was first mentioned in 1423, but people lived here long ago. These lands were inhabited by Illyrians. Later, noble Romans settled here. Many finds of the ruins of villas and household items confirm these facts. However, there are more recent and well-preserved monuments. For example, the Church of St. Francis of Assisi in the Baroque style or the parish Church of St. Frane which construction dates back to the 16th century. The shipyard and the Marina have been operating for almost three centuries.
Guide to Murter sightseeing - things to see and to visit
Murter island in Croatia is part of the Sibenik archipelago. It began to attract travellers' attention many hundreds of years ago. The island is a place of interest to contemporary tourists, …

Open
Jezera is a small fishing village. The settlement itself is a historical monument. It was firstly mentioned in 1298. Two graves of people of noble origin belonging to the Illyrian culture were found here in 1938. A place with strange spiral stones, used by the inhabitants of the island was found two kilometres from the village. There are two 17th-century churches in Jezera: the Church of Our Lady of Health built in Baroque style and the Church St. Ivan of Trogir.

In the section below, you can get one of our excursion, activities or city discovery tours over Murter and surroundings. Our website offers 10-30% lower ticket prices, when compared to the offline purchase on the spot.

This guide to cultural sights Murter is protected by the copyright law. You can re-publish this content with mandatory attribution: direct and active hyperlink to www.orangesmile.com.
Murter - guide chapters 1 2 3 4 5 6 7 8 9
Reference information
Map of all churches

Cathedrals and basilicas near Murter
♥   Katedrala sv. Stošije (Anastazije), Zadar, 48.3 km from the center. On the map

Photogallery of cultural heritage of Murter

Excursions over cultural sights of neighbours of Murter

Zadar
The building of the city hall is the most interesting architectural monument located near the square. Ancient city gates remain the permanent symbol of Zadar. The gates were built in 1543. Their appearance resembles a graceful triumphal arch, and the gates are decorated with two important symbols - the emblem of Zadar and a winged lion. Roman Forum is a very popular ... Open »
Ciovo Island
The central attraction of Ciovo is the notorious city of Trogir. It was founded in the 3rd century BC by the colonists from Syracuse. The settlement has now grown to a fairly large size and has long gone beyond the tiny island between the coast of mainland Croatia and Ciovo. You can get to the central, historically valuable part of Trogir by crossing the bridge over the canal ... Open »
Dugi Otok
You should definitely go to the farm for the breeding of donkeys. This tour is especially interesting if you are going to Dugi Otok with your children. There are several of them on the island. Almost all of them are open to visitors. Dalmatian donkeys are the symbol of the island. Guests are offered to take care of animals, clean them, feed them and, of course, ride on fluffy ... Open »
Split
The Palace of Diocletian is an attraction that is known far beyond the city. This is a real miniature city with an abundance of beautiful historic buildings; its territory is fenced with high fortification walls. Here is the Church of St Dominic, named after the patron saint of the city. The religious building was erected on the ruins of an ancient mausoleum. In the first half ... Open »
Vis Island
Komiža is the oldest port on the island. It was founded by Venetians who needed a transit point for trade in the sea. The village is located only 10 kilometres from the town of Vis. One of the most interesting local attractions is the building of the Community Centre. It is a high and well-preserved tower of the Renaissance, built in the 16th century. Saint Nikola church ... Open »
Hvar
Hvar is the largest city of the island; a significant part of historical sites can be found on its territory. The Cathedral of St. Stephen is situated on the main square; its construction has begun in the 16th century and lasted until the mid17th century. At the final stage of construction the unusual bell tower was added. Now its top is equipped with an excellent viewing ... Open »

Culture guide to Murter. Which fascinating sights to visit once you are in Murter: temples, churches, museums, theaters and castles. Recommendations (with addresses, phone numbers and links) on the places 'must visit' in Murter. Plan your own city excursion by using this page info!