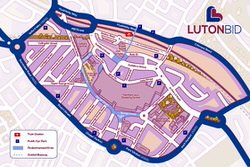 Interactive maps of hiking and biking routes around Luton

1. You can zoom in/out using your mouse wheel, as well as move the map of Luton with your mouse.
2. This interactive map presents two modes: 'Biking Routes' and 'Hiking Routes'. Use the '+' button on the map to switch between them.

This Luton map has two modes: 'Railway Network' and 'Landscape & Rural Map'. Use the '+' button on the map to navigate.

Our guide to Luton

Luton is a part of Bedfordshire, which is famous for its rich history and carefully follows ancient historical traditions. Among the main attractions of Luton tourists should certainly not to forget to visit the old town hall and a magnificent Wardown Park. On the territory of the park are located Museum of Luton, the ancient church of St. Maurice and an art gallery. During this period of the year life in Luton … Open

Now the thematic museum houses more than 50 vehicles, some of which are over 200 years old. Here you can see exquisite carriages designed for the royalty, wealthy merchants, and the richest inhabitants of the region. Now the museum exhibits can often be seen in theatrical productions and films, as well as at official events of the royal family. Tours of interesting ancient castles that have been preserved in … Open

Luton guests will have the opportunity to visit the largest zoo in the UK - Whipsnade Zoo. This is a historic zoological garden covering an area of about 600 acres. On a vast territory in the vicinity of the city, it has gathered animals from all corners of the world, more than 2,500 animals in total. Here you can see rare rock-wallabies, zebras, crocodiles, various species of wolves and monkeys. Besides, a large … Open

Continue your acquaintance with traditional regional cuisine in Wernher Restaurant, which also features a unique historic interior. Its chefs prepare many signature dishes according to unchanged old recipes. Here you can try dishes that were popular with townspeople a hundred years ago. Traditional British pastries, hearty pot meals, asparagus and river fish dishes that are so common in the region - everyone will … Open

Traditions and mentality of Luton

The festival has a very rich entertainment program, which includes music concerts, theater performances, film screenings, art exhibitions, as well as sports competitions. The youth festival has one interesting feature - a significant part of its activities takes place in the historic St Luke’s Church Leagrave. It is an important local historical monument that has long acquired the status of a popular cultural … Open

One of the most beautiful historical monuments of Luton is the Church of St. Mary. It was built in the 10th century in honor of the victory over the Danes. Currently, the church impresses with its scale. In the early 20th century, it underwent a complete restoration, during which many elements of pristine decoration were restored. The church is 57 meters long and 27 meters wide. In the old church, a tower which is 27 … Open