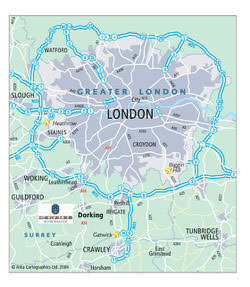 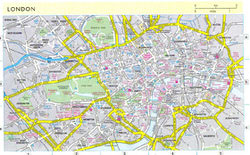 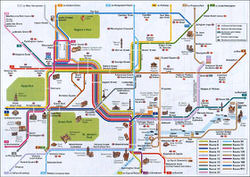 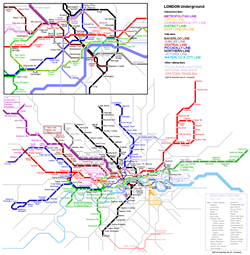 Interactive maps of hiking and biking routes around London

1. You can zoom in/out using your mouse wheel, as well as move the map of London with your mouse.
2. This interactive map presents two modes: 'Biking Routes' and 'Hiking Routes'. Use the '+' button on the map to switch between them.

This London map has two modes: 'Railway Network' and 'Landscape & Rural Map'. Use the '+' button on the map to navigate.

Our guide to London

London for children - what to visit

London has prepared many surprises for its young guests, so families will not have to search interesting places to visit. Many travelers prefer to start the observation of the city with a visit to London Eye. The giant Ferris wheel has become an important symbol of London. Carriages of London Eye reach the height of 135 meters, making it possible to see all main landmarks and charming parks. In the evening, … Open

The design hotel W London Leicester Square is an absolutely unique place. The hotel is open in a beautiful building with panoramic windows. When darkness falls to the city, the façade of the building is lit by the artistic illumination. Guest rooms are mostly made in cream shades. Each of the rooms has a big white bed with satin crimson colored bed clothing. The décor of public areas is no less interesting. In some … Open

Travelers with children are recommended to visit Hamleys toy shop that is recognized as one of the biggest toy shops in the world. One can easily find excellent quality toys of any style and for any age in Hamleys. In this giant seven-storey shop, visitors will find thousands of types of toys, from inexpensive teddy bears to the newest game consoles and accessories for them. The opening of the first Hamleys shop took … Open

Hotels with history of London

Any list of historic hotels in London would be incomplete without The Royal Horseguards. Located not far from Trafalgar Square, the hotel is open in a complex of spectacular historical buildings surrounded by a garden. The hotel’s décor is a mix of modern traditions and fashion trends of the past. Elegant looking furniture made of dark wood is in perfect harmony with modern textiles of different shades. In … Open

5. Under no circumstances leave your personal belongings unattended, even in a car that has been rented. Special guarding parking is the best place to leave your car as there are quite many car thieves in London. 6. Local residents are distinguished by politeness and restraint, so visitors need to reciprocate any sign of attention. In the stores you show greet the seller; make sure you hold the … Open

The city of London is not only about culture and art; here you will have numerous variants for cool entertainment. Londoners are active followers of active life, not without reason the whole city is riddled with bicycle paths. There are about ninety of them in London, without counting the four bike trails. Moreover, there are 700 bicycle rental outlets accomplished by the developed program that allows you to build … Open