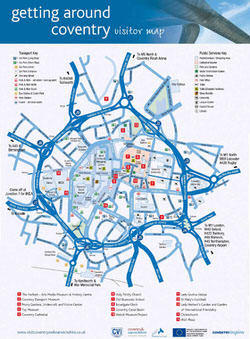 Interactive maps of hiking and biking routes around Coventry

1. You can zoom in/out using your mouse wheel, as well as move the map of Coventry with your mouse.
2. This interactive map presents two modes: 'Biking Routes' and 'Hiking Routes'. Use the '+' button on the map to switch between them.

This Coventry map has two modes: 'Railway Network' and 'Landscape & Rural Map'. Use the '+' button on the map to navigate.

Our guide to Coventry

In the miniature town works the only state museum - Transport Museum. Its exposition can be studied for hours. It fully reflects the history of the development of the transport industry in England. In this museum, you can see the old steam engines and locomotives that cruised the railways hundreds of years ago. Of great interest is the collection of old bicycles and cars. Visitors of the museum are allowed to be … Open

Coventry for children - what to visit

Coventry, a city in the heart of the United Kingdom, is a great place for a family vacation. Both those wishing to spend time in peace and tranquility, as well as lovers of active pastime. will enjoy their stay here. Here you can visit interesting museums, explore cultural and historical sights, ride horses, fly a balloon or helicopter, play golf. Experiencing all these activities together, families strengthen … Open

All sports fans should definitely explore Sports Stars Memorabilia, a specialty store occupying another beautiful historic building. It sells souvenirs one way or another related to sports. Thus, you can buy old photos of famous athletes, mugs and other souvenirs with photo printing, thematic magazines and books, badges and posters, as well as a lot of other attributes that all sports fans are fond of. This store … Open

8. In the local pubs there are special rules of behavior. So, do not try to call the waiter over. You have to go to the bar counter by yourself and choose dishes you would like. It is customary to leave a tip in restaurants, 10% of the order would be sufficient. 9. Travelers who want to buy antiques or paintings as souvenirs, need relevant documents, otherwise they would fail to take it out of the … Open

Traditions and mentality of Coventry

The inhabitants of the city have their own special gastronomic traditions. India has been a British colony for many years, so today Indian cuisine is very popular in many towns across the UK. And Coventry is no exception. In local restaurants, one can taste traditional Indian curry, as well as a lot of other unusual Indian dishes. Many grocery stores offer customers spices and special delicacies for cooking Indian … Open

One of the most popular gastronomic places in Coventry is The Royal Oak restaurant, where British cuisine is offered to guests. Nice room design in bright colors, a variety of treats and friendly attitude of the staff make The Royal Oak restaurant a great place for a family dinner. Among the restaurants serving Italian cuisine the most popular is Da Vinci. It serves delicious pizza and pasta, tasty fish dishes and … Open