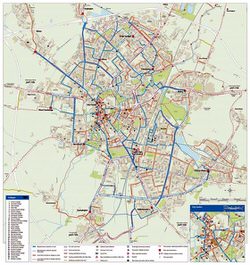 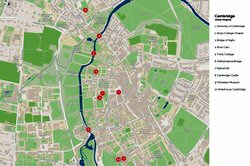 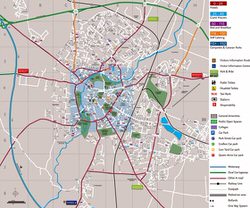 Interactive maps of hiking and biking routes around Cambridge

1. You can zoom in/out using your mouse wheel, as well as move the map of Cambridge with your mouse.
2. This interactive map presents two modes: 'Biking Routes' and 'Hiking Routes'. Use the '+' button on the map to switch between them.

This Cambridge map has two modes: 'Railway Network' and 'Landscape & Rural Map'. Use the '+' button on the map to navigate.

Our guide to Cambridge

One of the most popular men's stores in Cambridge is historical Robert Graham, which has operated continuously since 1874. This store sells elite varieties of alcohol and the best types of tobacco from around the world. It also presents a chic selection of tobacco smoking accessories from the best global manufacturers. Here, men will be able to choose the popular whiskey for their bar, buy a new pipe or a pouch of … Open

5. Local inhabitants are very polite and helpful. You can hear greetings and words of gratitude literally everywhere in Cambridge. When entering a public institution, do not forget to greet everyone present. Tourists should also not forget to thank for any service provided. 6. Line power supply voltage is 240V. All the hotels are equipped by three-prong electrical wall outlets. You may require … Open

Escape rooms are in great demand among tourists and locals alike, which is not surprising since entertainment centers offer fascinating quests and non-trivial stories. Thus, in simple-named Cambridge Escape Rooms, you can try to find out the secret of an ancient tomb, prevent a bomb explosion or get a mystical experience by solving the mystery of the underworld. And all this is within a limited timeframe of 60 … Open

Among the most unusual attractions of the city is worth noting the Corpus Clock, fixed on the facade of Corpus Christi College. At first glance this original building can barely be recognized as a clock. This is a large gold-plated disc on which there are no usual minute or hour hands. The hands of the clock were replaced with special holes in the disc. The exact time for these original watches can be determined by … Open

Cambridge is a cozy campus town that can, however, offer many quality dining options. Here tourists can easily find a restaurant that will perfectly fit not only their eating habits, but also a desired level of prices. Gourmet travellers, families with small children and other tourists will easily find great eating places in this town. Bridge Street is the location of a large number of attractive budget restaurants … Open

Maps of Luton
A real outdoor entertainment center is Wrest Park, which covers an area of about 90 acres. It is noteworthy for its Italian garden and a rose garden, one of the largest in the country. The territory of the park is considered an open-air museum with unique well-preserved historic buildings and sculptures. A significant area of the park is reserved for exhibitions and ... Open »
Maps of Ipswich
Vacationers wishing to boost their adrenaline level and trying to escape a locked room in 60 minutes by using their sheer wit will definitely like a company with a very simple name - Ipswich Escape Rooms. Puzzle Room is one more popular provider. Travelers who like learning new things will be more than pleased to visit Glass & Craft. At this club, they can learn how to make ... Open »
Maps of London
The city of London is not only about culture and art; here you will have numerous variants for cool entertainment. Londoners are active followers of active life, not without reason the whole city is riddled with bicycle paths. There are about ninety of them in London, without counting the four bike trails. Moreover, there are 700 bicycle rental outlets accomplished by the ... Open »
Maps of Norwich
Cinema buffs and those who just want to enjoy a new move will be delighted with the city's most popular cinema, which is called simply “Cinema City”. Housed in a beautiful medieval merchant's house of the 14th century, it provides a modern cinema hall ensuring a comfortable move-watching experience. Its patio with a lovely bar is also very popular. Those who want to take ... Open »
Maps of Leicester
Sutton Circuit is a great place for those who want to try karting, and Leicester Outdoor Pursuits Centre would be a gift for those who want to overcome rope obstacle courses, try bungee jumping, as well as go climbing. A popular type of outdoor recreation in Leicester is boating, most equipment rental points are based in Bede Park. You can also experience kayaking while in ... Open »
Maps of Oxford
Escape quest centers are also popular in the student town. Escape Hunt Oxford Club offers players to plunge into the atmosphere of the cult TV series "Doctor Who", visit a pirate-themed room or feel like a cowboy trying to escape from his pursuers in the Wild West. Exciting Game is no less interesting: in its rooms, you can feel like an art thief or save humanity from a virus ... Open »
Maps of Coventry
The city also has a number of modern entertainment centers, and Flight Simulators Midlands is among the largest ones. It offers visitors a huge selection of game simulators, including airplane flight simulators. All the gaming platforms are very realistic so visitors of the center get the impression of navigating a real aircraft. This entertainment center is popular not only ... Open »
OrangeSmile.com - online travel reservation expert providing reliable car rental and hotel booking services. We feature more than 25.000 destinations with 12.000 rental offices and 200.000 hotels worldwide.
Secure Server