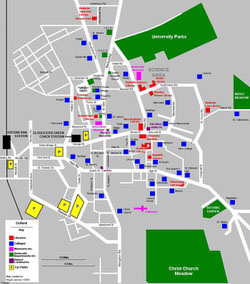 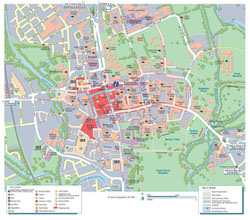 Interactive maps of hiking and biking routes around Oxford

1. You can zoom in/out using your mouse wheel, as well as move the map of Oxford with your mouse.
2. This interactive map presents two modes: 'Biking Routes' and 'Hiking Routes'. Use the '+' button on the map to switch between them.

This Oxford map has two modes: 'Railway Network' and 'Landscape & Rural Map'. Use the '+' button on the map to navigate.

Our guide to Oxford

Oxford cannot offer lots of enchanting entertainment centers, but vacationers with children here will certainly not be bored here. With school-aged children, you can visit Laser Kombat Oxford delighting kids with exciting laser games. This center provides excellent gaming rooms, all the necessary equipment is available for rent. Not only children but also adults will enjoy this kind of entertainment. Partyman … Open

In Oxford, shopping enthusiasts can stroll along the picturesque shopping streets, as well as visit famous malls and colorful markets. The city's most prestigious shopping street is High Street that concentrates luxury and designer shops, as well as the most expensive restaurants in town. This is the right area for wealthy tourists who give preference to the most sophisticated clothing and accessories. In the main … Open

1. The most popular city transport means is a bus being available 24/7. After 23.00 the city is cruised with special night buses which have an “N” mark in track number. It should be noted that various travel passes are not valid on night bus routes. 2. Tips are welcome in all gastronomy establishments of the city as well as in taxi. The tips should be about 10 – 15% of the total order cost. In … Open

In Oxford, you can find many interesting entertainment centers for every taste. Thus, visitors to The Race Hut can get a unique simulator experience and feel like a professional racer. This is a great place to brighten the mood, which is equally popular with tourists and locals. Visiting Laser Kombat as part of a team of friends or family members, you can play laser tag together and hold a kind of team-building event … Open

No matter at what time of the year you're visiting Oxford, you will surely get to some interesting festival - this is a city where "something always happens". For example, at the end of January, it hosts the Oxford Music Festival with its wonderful classical music concerts taking place at the Wolfson College's concert hall. Apart from performances, master classes are also available to its visitors. Another music … Open

In the heart of the city is the beautiful historic Carfax Tower, the height of which is 23 meters. This tower is the only surviving fragment of the church that was located in this place in the 13th century. In 1676, six bells were installed on top of the tower, which can still be heard today. The local church had been operated until the beginning of the 19th century, and eventually came to desolation and gradually … Open