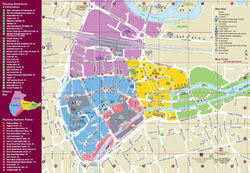 Interactive maps of hiking and biking routes around Reading

1. You can zoom in/out using your mouse wheel, as well as move the map of Reading with your mouse.
2. This interactive map presents two modes: 'Biking Routes' and 'Hiking Routes'. Use the '+' button on the map to switch between them.

This Reading map has two modes: 'Railway Network' and 'Landscape & Rural Map'. Use the '+' button on the map to navigate.

Our guide to Reading

An old factory, built in the early 19th century is symbolic of the city. This factory produced famous Huntley and Palmers cookies. At the time of its foundation, it was one of the largest industrial enterprises in the city. Nowadays, you can see an old prison nearby. Oscar Wilde was serving his punishment there and thus brought it worldwide renown. It was within the walls of the prison that he wrote his letter to … Open

1. Local shops start working at 9 am or earlier and commonly serve customers till 5-6 pm. Large shopping centers and entertaining malls located in the center of the city accept international credit cards. Tourists opting to visit local markets and shops located far from the city center should have enough cash by themselves to pay for purchases. 2. Museums and other cultural centers start working at 10 … Open

A rich assortment of pastry, aroma tea with milk and sweet tempting desserts are the main complements to evening tea, being one of the main ethnic features. Dinner commonly falls after 18 being the most important meal during a day. Evenings the local restaurants offer a rich choice of meat and fish dishes, great assortment of main courses and fantastic garnishes on the menu. A visit to the city of Reading will not be … Open

In the Middle Ages the city of Reading was a significant political and religious center of the country. In the 12th century an abbey was established on its territory, and it was the most significant and rich in the country at that time. Today the Reading abbey is the main symbol of the city and one of its remarkable sites. In the middle of the 16th century the powerful abbey was abandoned, so local folks unbricked … Open

Maps of Oxford
In Oxford, you can find many interesting entertainment centers for every taste. Thus, visitors to The Race Hut can get a unique simulator experience and feel like a professional racer. This is a great place to brighten the mood, which is equally popular with tourists and locals. Visiting Laser Kombat as part of a team of friends or family members, you can play laser tag ... Open »
Maps of London
The city of London is not only about culture and art; here you will have numerous variants for cool entertainment. Londoners are active followers of active life, not without reason the whole city is riddled with bicycle paths. There are about ninety of them in London, without counting the four bike trails. Moreover, there are 700 bicycle rental outlets accomplished by the ... Open »
Maps of Luton
Luton guests will have the opportunity to visit the largest zoo in the UK - Whipsnade Zoo. This is a historic zoological garden covering an area of about 600 acres. On a vast territory in the vicinity of the city, it has gathered animals from all corners of the world, more than 2,500 animals in total. Here you can see rare rock-wallabies, zebras, crocodiles, various species of ... Open »
Maps of Southampton
In the pier of Ocean Village you should definitely book a cruise excursion and enjoy the incredible serenity, sailing over the water surface and admiring the gorgeous views. Among other water activities that are popular in the British city, it is worth noting diving, fishing, as well as riding on high-speed motorboats. Endulge Therapy is considered the most popular spa in the ... Open »
Maps of Portsmouth
For children there are perfect playing grounds, it is possible to find a lot of interesting attractions on the park’s territory. While children have a fun on the roundabouts and chutes, parents can rest in comfortable resting zone or go to one of the cafes. The most popular night establishment of the city is comedy-club Jongleurs, several times a week it suggests interesting ... Open »
Maps of Bath
Nightlife fans will not be disappointed as well, as Bath has many attractive bars and clubs. Do not hesitate to visit Circo lounge bar famous for its impressive selection of signature cocktails and stylish furnishings. Travelers who are used to relax in a calm and peaceful atmosphere should not ignore Crystal Palace. The assortment of beers presented here is really excellent, ... Open »
Maps of Bristol
Those wishing to entertain themselves in simulators should think about visiting VR Star, and those who want to try their hand at karting are always welcome in Absolutely Karting or TeamSport. People who want to play active military games should go to Hamburger Hill Bristol Airsoft or iCombat Bristol, and Braces Shooting and Country Supplies are ideal for those who want to ... Open »
OrangeSmile.com - online travel reservation expert providing reliable car rental and hotel booking services. We feature more than 25.000 destinations with 12.000 rental offices and 200.000 hotels worldwide.
Secure Server