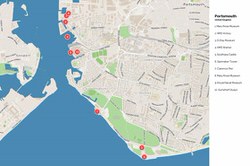 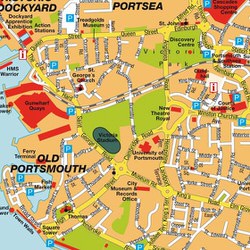 Interactive maps of hiking and biking routes around Portsmouth

1. You can zoom in/out using your mouse wheel, as well as move the map of Portsmouth with your mouse.
2. This interactive map presents two modes: 'Biking Routes' and 'Hiking Routes'. Use the '+' button on the map to switch between them.

This Portsmouth map has two modes: 'Railway Network' and 'Landscape & Rural Map'. Use the '+' button on the map to navigate.

The main holiday of Northern Ireland is St. Patrick's Day, who is the heavenly patron of this country. The fest is held on the day of his death, on March 17. The holiday is celebrated on the territory of the whole of Great Britain, in a number of cities of the USA and other countries. A grand parade is held in London. In Manchester, there is a two-week Irish festival. There are some cultural events and a market in the holiday timeframe. The festival ends with a colorful parade. The main events take place in Belfast. The streets are filled with green decorations. Even the water in the fountains is painted green. October 21 is the unofficial celebration of the Day of the Apple. There are fairs where one can not only buy apples but also try dozens of various dishes with this fruit, as well as take part in funny apple contests. … Open

Our guide to Portsmouth

Permanent clients always note the attentive and prudent service. For resting with children it is better to recommend the hospitable restaurant Smile, which is specialized in national cookery. There are a lot of people in this restaurant at the morning time, when there is the perfect served breakfast. One of the most unusual establishments in Portsmouth is Indian restaurant Blue Cobra. Its menu corresponds with … Open

History buffs would be interested in visiting Fort Nelson built in the middle of the 19th century, which is presently part of the Royal Armouries. A collection of artillery that includes especially valuable exhibits is of particular interest to its visitors. The open-air museum houses bronze cannons produced back in the middle of the 15th century, as well as a collection of French guns that were captured during the … Open

For children there are perfect playing grounds, it is possible to find a lot of interesting attractions on the park’s territory. While children have a fun on the roundabouts and chutes, parents can rest in comfortable resting zone or go to one of the cafes. The most popular night establishment of the city is comedy-club Jongleurs, several times a week it suggests interesting program for the guests. Near the … Open

Also Royal Marines Museum is interesting; people who enjoyed walking along historical docks need to visit Historic Dockyard. Another interesting place for family resting is Child’s Museum, where various interactive games are gone off every day. In museum “Albacore” under the opened sky visitors can see the legendary submarine with the same name. It was built in 1953 and at this time it was the fastest … Open

Maps of Southampton
Thematic bars, the “highlight” of which is not only the fact they are decorated in a certain style but also the corresponding names in the menu, are very popular in the city. The pub The Hobbit is known all over the world. Nevertheless, the bars of The Titanic Public House and Board in the City are equally popular. Other pubs and bars with an amazingly relaxed atmosphere ... Open »
Maps of London
The terrain of British Islands and landscapes provide the perfect conditions for building the golf clubs. Greater London is famous for its golf clubs - only in the city there are more than thirty of them, including four institutions with virtual simulators that allow upgrading1 the level of skill before entering the real field. The fans of English classics will repeat the path ... Open »
Maps of Oxford
The student town boasts of several theaters, bars, and art cafes where you can have a great time watching great shows. So, fans of stand-up will be delighted with such clubs as Jericho Comedy, QED Comedy Lab, as well as A Club If You'd Like To Go Comedy. All the centers are dominated by a casual atmosphere, which creates a feeling of being close to speakers. Perhaps the ... Open »
Maps of Bath
Nightlife fans will not be disappointed as well, as Bath has many attractive bars and clubs. Do not hesitate to visit Circo lounge bar famous for its impressive selection of signature cocktails and stylish furnishings. Travelers who are used to relax in a calm and peaceful atmosphere should not ignore Crystal Palace. The assortment of beers presented here is really excellent, ... Open »
Maps of Bristol
To explore the city's attractions and entertainment facilities, you can rent a bike. Besides that, here you can book segway tours, which may seem impressing and amusing for many tourists. However, numerous Bristol's entertainment centers give travelers positive emotions as well. For example, fans of shooting and quad biking are invited to Bristol Activity Center, those who ... Open »
Maps of Luton
Besides charming parks, Luton is famous for its entertainment facilities. The famous Grosvenor Casino Luton is a vivid example. It would be of interest even to those who have never been keen on gambling before. The casino has prepared hundreds of gaming tables and slot machines, a popular bar, and interesting entertainment shows for the audience. The popular casino is one of ... Open »
OrangeSmile.com - online travel reservation expert providing reliable car rental and hotel booking services. We feature more than 25.000 destinations with 12.000 rental offices and 200.000 hotels worldwide.
Secure Server