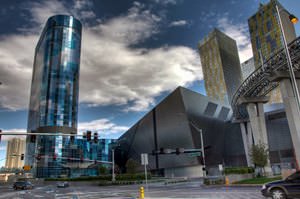 Las Vegas is the city of kitsch and glitter, slot machines, booze and loud music. People come here not to improve their health, to replenish the wardrobe or to join the high culture. Here, your main intention must be throwing the money on every step and enjoy it to its fullest! In Nevada, everything that is forbidden or restricted in other states like prostitution, gambling, alcoholic beverages - is permitted here. Dozens of brothels work on the territory of the state, and it is very likely that you will receive the first business card of one of these establishments from the taxi driver on the way from the airport to the hotel. Remember, casinos always win. You can have your first game already at the airport - even here all sorts of “one-armed bandits” are installed. Do not be in hurry - you will see them in the hotel lobbies, and, of course, actually in the casino.
Old hotels keeping the history of Las Vegas
Many high-class hotels in the city are located on Las Vegas Strip, and the luxurious Bally's Las Vegas Hotel & Casino is one of them. During years of work, this hotel has won international …

Open
Local people of Las Vegas are always smiling. This polite habit of American people is not surprising anymore, but why do they smile to strangers? It turns out that it's an embarrassing situation to make an eye contact with a stranger, and to smooth this moment - people smile. Another unspoken rule of Las Vegas residents is about the personal space. For example, do not get close to people in the queue. Everybody obeys the rules! There is no point in getting nervous and thinking about how to get to work, or somewhere, to exceed the speed. Everyone knows that you have the right to go that way here. Locals also possess one anti-manner habit: they have some strange way of licking their fingers in public places, and home, without any embarrassment at the end of a meal.
The New Year is a wonderful occasion to visit Las Vegas. Imagine a party of 6.5 kilometers long that spills out of the casino and hotels and occupies the entire famous Strip from Mandalay Bay in the south and to the Stratosphere in the north. The movement begins to overlap somewhere around 6 p.m. and people are gradually sliding down, hurrying to take strategically important points near the places where you can get cocktails and occupy the place to enjoy the shows, which are shown by different casinos. Tens of thousands of visitors dressed in clown hats, with slick adjusters, sequins, and other New Year's tinsel settle on Fremont Street, which is located not far from the famous casinos - a couple of miles to the north on the Strip. Fremont Street or Fremont Street Experience - one of the oldest streets in Las Vegas, where the first casino was opened that is now called the Golden Gate Hotel & Casino. A huge screen arch covers the whole street. Eating out on New Year's Eve in Las Vegas is a topic for a separate story, but all you should know is without booking a table in advance it is almost impossible to find anything - everything is just overcrowded. The best places for New Year's celebrations are the restaurant “Top of the World” and, a restaurant on the top of the Stratosphere Tower. Copyright www.orangesmile.com
Legends - famous hotels of Las Vegas
Many hotels in Las Vegas are a regular venue for various music concerts and entertaining show programs. Fans of rock music unchangingly like Hard Rock Hotel and Casino. A giant model of …

Open
As far as we live in the 21 century, it's quite hard for us not to follow the latest trends in the techno spheres. Moreover, if you're the fan of the latest technological developments, follow each and one novelty - then you must visit Las Vegas in the first weeks of January to enjoy the CES event. The Consumer Electronics Show is an annual exhibition traditionally held in Las Vegas since 1967. At this exhibition, manufacturers of custom electronics come here from around the world, “show themselves” and “look at other”. Initially, CES until 1990 presented mainly video tape recorders, optical discs, video cameras and sound cards, but over time the arsenal of technical innovations has grown significantly. Now at the most advanced exhibition for fans of technical devices show everything from smartphones to televisions, from smart shoes to autonomous single-seat flying taxi-drone. 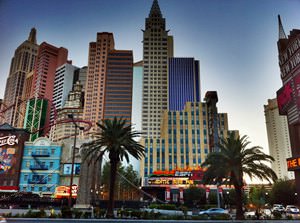 In June, the largest EDM-festival of the USA turns, for a couple of days, the American capital of gambling to the capital of club music. Electric Daisy Carnival regularly takes the highest places in the ratings of the world's leading dance electronic music events in the US. The festival, which received from critics the flattering epithet “American Ibiza”, not only gathers the best artists in its genres such as the house, techno, trance, hardstyle, and dubstep. Here, the most incredible fantasies about the perfect space for unrestrained dances that unite thousands of fans of electronic rhythms come true. The first EDC festival was held in Los Angeles in 1997. Since then, this event has become a true international franchise that has spread to major US cities, as well as to Mexico, England, Brazil, and Japan. The central and largest “carnival” opens annually in Las Vegas. For three days, the Las Vegas Motor Speedway is transformed into an iridescent island of music and entertainment. Each visitor becomes a participant of a grandiose costume performance under the shadow of giant fire-breathing sculptures and rotating Ferris wheels in a place of festive lights. Every day more than 130,000 people become guests of the light and sound extravaganza in Las Vegas. The price of tickets for Electric Daisy Carnival starts from 95 dollars.

Cathedrals and basilicas near Las Vegas
♥   Guardian Angel Cathedral, Las Vegas, 1.4 km from the center. On the map

Unique landmarks in Las Vegas and around 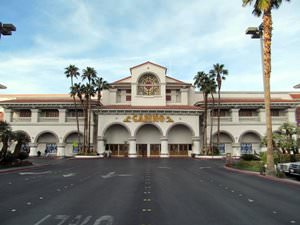 Distance from Las Vegas center - 2.4 km.
The first major renovation of the hotel was completed in 2002. The area of its casino was significantly expanded. Several new restaurants were also opened. Despite its global fame, the Gold Coast has been experiencing serious financial difficulties in recent years. Several gaming rooms were closed in the casino due to this. But these difficulties do not threaten the work of a well-known hotel. The building in which the hotel is located was built in the likeness of colonial palaces. Beautiful arcades are special elements of its architecture. Luxurious stained glass windows adorn the building. … Read further 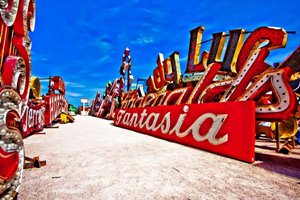 Distance from Las Vegas center - 7 km.
The original museum, which has no analogues in any other city in the world, was founded in 1996. Today, it can boast with about 150 old neon signs. In addition, the museum staff is actively involved in the design of urban parks and streets. People care about neon signs in a number of urban institutions. … Read further 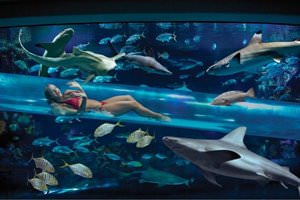 Distance from Las Vegas center - 5.9 km.
One part of the pool has a special glass tube to go down a slide, sharks and exotic fish row around it. The three-level pool distinguishes a very beautiful design with nice artificial waterfalls, but commodious marble balconies designed with palms and other exotic plants surround the pool. The volume of this pool is 76 000 liters and bind oceanarium contain 300 species of fish. … Read further 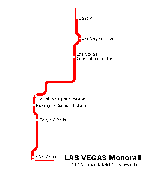 Colors of Las Vegas in photos

Traditions and festivals in cities around Las Vegas

Nevada
Participants have themed workshops and create incredible design layouts and amazing art installation. Curious musical performances also remain a fairly common way of expression; music is heard everywhere around the clock. Incredible futuristic concepts of alien machines, original outfits of participants and hot sun - these are main characters of the world famous festival. ... Open »
Ontario Town
In 1998, there was a controversial situation over the tradition of creating Christmas installations. Some representatives of the local community were outraged by the amount of resources the city authorities annually spend on their creation. To mitigate the situation, representatives of the Ontario Chamber of Commerce decided to run a special named Christmas on Euclid. They ... Open »
Anaheim
Anaheim is located in California, where the grass seems greener, and the sun brighter. And the local people - no, they do not seem friendly at all - they really are. This is the place where you can recharge your positive energy just walking down the street - that's how residents of Anaheim are hospitable and city spaces are beautiful. Interestingly, the rain can plunge ... Open »
Los Angeles
An important event in the holiday calendar of Los Angeles is the Hollywood Christmas Parade, which is usually held the day after Thanksgiving. This holiday marks the beginning of the Christmas holidays, the entire period of which is filled with entertainment. After the parade and admiring original costumes of its participants, a series of gastronomic and cultural ... Open »
Hollywood, CA
In 1939, the letters were illuminated with four thousand bright lights, and a piece of the land on which the letters stood has officially become part of Los Angeles. In 1978, the sign was completely renovated, and well-known musicians, including Ellis Cooper, Gene Autry, and Paul Williams, became sponsors of the “reconstruction”. Today, the sign is controlled by a special ... Open »
Beverly Hills
On the first Sunday of May, Beverly Hills hosts a fantastic auto show - the Greystone Mansion Concours d’Elegance. Attendees of Greystone Mansion have an opportunity to look at 150 exclusive automobiles and motorcycles. The majority of cars were made before 1975. The event schedule also includes live music, various fashion shows, lectures, an automobile photography ... Open »

Cityguide on traditions, mentality and lifestyle of people in Las Vegas. Learn the best periods to visit Las Vegas to discover its soul - authentic festivals, events and celebrations. We will also reveal the interesting habits, attitude towards the world and to tourists in Las Vegas.