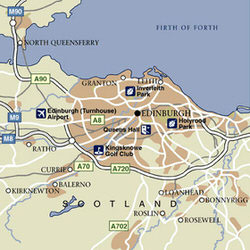 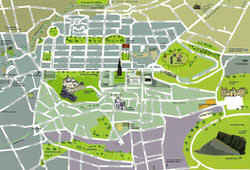 Interactive maps of hiking and biking routes around Edinburgh

1. You can zoom in/out using your mouse wheel, as well as move the map of Edinburgh with your mouse.
2. This interactive map presents two modes: 'Biking Routes' and 'Hiking Routes'. Use the '+' button on the map to switch between them.

This Edinburgh map has two modes: 'Railway Network' and 'Landscape & Rural Map'. Use the '+' button on the map to navigate.

Our guide to Edinburgh

The old town area is the location of another wonderful hotel, Hotel Du Vin Edinburgh. This high-class hotel is open in the building of the former hospital. Nowadays, not much reminds of the former purpose of the building. Hospital wards have been turned into stylish rooms with all necessary amenities and equipment. Some elements of décor remind of traditions of the past – in some rooms, it’s still possible … Open

Traditions and mentality of Edinburgh

Hogmanay – the local New Year – remains the favorite holiday of locals and tourists. The celebration starts on December 29. During four days various celebrations and public festivals take place on the streets of Edinburgh. Colorful fairs, theatrical performances and activities for children – you will see many people on the streets of the city until late at night. This celebration is also notable for numerous … Open