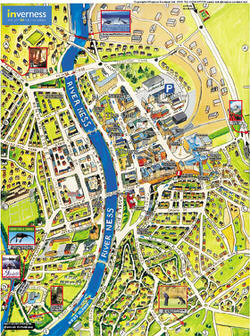 Interactive maps of hiking and biking routes around Inverness

1. You can zoom in/out using your mouse wheel, as well as move the map of Inverness with your mouse.
2. This interactive map presents two modes: 'Biking Routes' and 'Hiking Routes'. Use the '+' button on the map to switch between them.

This Inverness map has two modes: 'Railway Network' and 'Landscape & Rural Map'. Use the '+' button on the map to navigate.

New Year in the UK is also celebrated with a parade. The British spend the night with their family and close friends; they treat New Year's Eve as a new frontier. It is customary to make promises, set goals and build grandiose plans for the next year. At 12 noon on January 1, a colorful parade starts in London. Acrobats, dancers, musicians, and actors take part in it. On the fourth Sunday of Great Lent, the British celebrate Mother's Day. It is necessary to visit a mother or grandmother, give her flowers or a greeting card. During the celebration of Easter, it is customary to exchange chocolate eggs and special buns with a cross. Easter celebrations begin on Friday; rites and festive events end only on Monday. … Open

Our guide to Inverness

6. Tourists are recommended to visit Inverness during the period of festivals and national holidays. During this time of year the cultural and entertainment program is especially interesting. The dates of the national holidays should be specified in advance as they may vary every year. 7. In order to buy the best whiskey in Scotland, travellers are recommended to go to the local factory. Its … Open

Vacationers wishing to boost their adrenaline level will be amazed to try local escape quests. For that purpose, visit Lockdown club in the capital of the Scottish Highlands. The club offers several games, in which they need to escape from locked areas using their wit. These are Lost, in which players need to survive away from civilization, and Casino Heist, in which players become members of a criminal syndicate … Open

Festivals and events in Inverness

At the beginning of the first summer month, Northern Meeting Park becomes the venue of a music festival called OutDores. Its friendly, family-like atmosphere has made the event really popular. For tourists, it is an incredibly exciting way to get acquainted with the local culture by listening to performances of local musicians and trying authentic local food. It is hard to think of a better city than the heart of … Open

A variety of goods, so necessary for all tourists, is at Holm Mills Shopping Village store. Here, you'll purchase great suitcases and travel bags at great discounts. Yet, they have nice colorful backpacks for children. In a large department with souvenirs, you can pick up wonderful mugs, decorative pillows and photo frames. The store has an excellent gastronomic department, that offers products from local farmers. … Open

No less interesting is the Urquhart Castle. It is located on the top of a hill and has survived only partially until our days. From the adjoining territory of the castle, there is a beautiful panoramic view of Loch Ness. The history of the defensive structure is very interesting. Until the beginning of the 18th century, this castle remained unapproachable. In 1715 during the next battle, most of the castle … Open

Traditions and mentality of Inverness

Drumnadrochit village is located not far from the city. Here visitors are welcome to attend a wonderful museum dedicated to the Loch Ness monster. The mythical creature is certainly the most mysterious, but not the only symbol of the city. Inverness is often called the birthplace of porridge, bagpipes and whiskey. During year the city hosts a lot of interesting music festivals dedicated to the national musical … Open