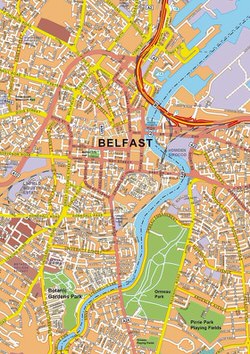 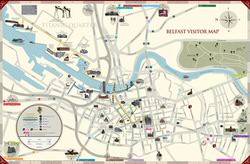 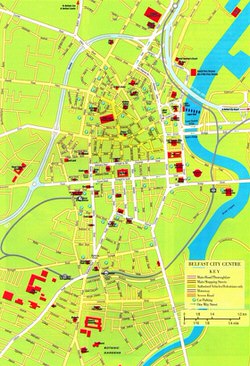 Interactive maps of hiking and biking routes around Belfast

1. You can zoom in/out using your mouse wheel, as well as move the map of Belfast with your mouse.
2. This interactive map presents two modes: 'Biking Routes' and 'Hiking Routes'. Use the '+' button on the map to switch between them.

This Belfast map has two modes: 'Railway Network' and 'Landscape & Rural Map'. Use the '+' button on the map to navigate.

One of the most important holidays in the UK is Christmas, which is traditionally celebrated on December, 25. The whole country lights up with holiday illumination on the eve of the holiday. It is celebrated even by families who do not belong to any religious confession. Christmas trees are set on the squares and in the living rooms. Houses are also decorated with toys, garlands, wreaths, and twigs of mistletoe hanging from the ceiling. It is customary to meet Christmas in the family circle. The whole family and relatives gather at the dinner table. The Christmas table dishes are strictly traditional. Turkey with stuffed vegetables is always served, and the hostess cooks a Christmas pudding for dessert. Another treat is specially cooked mulled wine. December 26 is a boxing day. It is common to exchange souvenirs and go for a walk. … Open

Our guide to Belfast

Belfast is the administrative center and the largest port city of Northern Ireland. In terms of the number of population, Belfast is inferior to Dublin only out of all cities of the island. Belfast is home to a great number of gorgeous historic landmarks, cultural and educational centers. According to scientists, first settlements in the territory of the modern city appeared yet during the Bronze Age. Numerous … Open

Belfast Castle is one more remarkable landmark of the region and one of the most important historic symbols of Belfast. The castle was built in the 12th century. The latest extensive restoration took place in the second part of the 19th century. There are many interesting stories connected with the beautiful castle. According to one of them, the castle had a very unusual keeper – a white cat. In the memory of the … Open

Travelers will have no problem finding a suitable hotel for any taste and budget. In Belfast, there are both luxurious 5-star hotels and attractive budget guesthouses. Right in the heart of the city, in the picturesque Cathedral quarter, you will find The Merchant - one of the most high-class hotels in the city. The hotel is open in an incredibly beautiful building that dates back to the middle of the 19th century … Open

Not only fans of loud parties and entertainment will fall in love with Belfast. This picturesque city is a perfect destination for a family vacation. If you arrive in the city with your spouse and children, consider attending Botanic Garden that is open in the territory of the Royal University. This garden is an exceptionally beautiful place that is also large in size. Its magnificent pavilions hide a rich collection … Open

Maps of Isle Of Man
Unique nature of the Isle of Man is its main feature attracting fans of eco-tourism from all over the world. Strolls through scenic forests are one of the most popular activities among foreign guests. Everyone is recommended to walk in Ballaglass Glen to appreciate the beauty and majesty of the local nature in full. There are rare plants, swift streams and quiet backwaters ... Open »
Maps of Dublin
More and more tourists are interested in cruises to Lambay Island that is considered a little-discovered gem of Ireland. Skerries offers exciting tours to the island. Dublin Bay Cruises regularly organizes interesting cruises to the Dublin Bay. Vacationers interested in observing the incredibly beautiful city from a bird’s eye view should definitely visit Ericsson Skyline. ... Open »
Maps of Kilmarnock
In rainy weather, feel free to go to The Garage Leisure Complex. It has a bowling alley and a great cafe, as well as a recreation area with gaming machines and simulators. The entertainment center is quite small, but still enjoying well-deserved popularity among locals and tourists. Those who'd rather prefer stylish nightclubs in Kilmarnock should pay attention to Paris ... Open »
Maps of Glasgow
Glasgow is also known as a mystical center. Or rather, this center is a place located nearby. We are talking about the famous Overtoun Bridge beloved by dogs for unknown reasons. The fact is that if you walk a dog here, it will definitely jump from it, leaving this world forever. Even if it survives, it will jump off the bridge again. Some skeptics believe that the reason for ... Open »
Maps of Motherwell
In the park, there are attractions for children of all ages. Even the smallest children will find here attractions and playgrounds. Older children and extreme addicts will be impressed by a roller coaster and high attractions. In the park, there is also a big wheel. More entertainments are available to tourists in a warm period. In summer, a small water park with swimming ... Open »
Maps of Blackpool
For fans of more active recreation, it would be very interesting to visit Blackpool High Ropes where both children and their parents will enjoy a zip-line. Those wishing to play laser tag as a large company are welcome in Impact Blackpool and Laser Quest Blackpool. Tourists who came with children and want to get their dose of extreme should not ignore Adrenalin Zone with its ... Open »
OrangeSmile.com - online travel reservation expert providing reliable car rental and hotel booking services. We feature more than 25.000 destinations with 12.000 rental offices and 200.000 hotels worldwide.
Secure Server