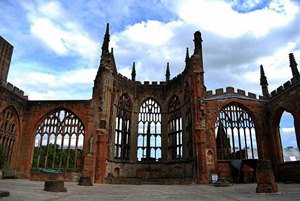 Coventry can hardly be called a typical tourist city, even though quite a lot of historical attractions have been preserved on its territory. You will not find huge crowds of tourists, life flows smoothly here. Those who have long dreamed of visiting a typical British city and plunging into its atmosphere will love it for sure.
Guide to Coventry sightseeing - things to see and to visit
Coventry is a modern resort city that is located not far away from London. This is an important historical center of England. This place became famous due to Scottish queen Mary, Lady Godiva …

Open
One of the interesting features of Coventry is its urban transport. The so-called mini-cars are very common and popular here. Driving this kind of car, it is much easier to move through the narrow city streets. They also prevent traffic jams, which is a common problem in many large cities.
Few people know that a factory producing "Cab" cars is based here in Coventry. Such cars are used by all local taxi services, they are widely spread across the UK. Even city buses are not regular but double-decker, so for many foreign guests it would be interesting to take a ride. Copyright www.orangesmile.com
Family holidays with kids in Coventry. How to entertain your child, things to show to children.
Coventry, a city in the heart of the United Kingdom, is a great place for a family vacation. Both those wishing to spend time in peace and tranquility, as well as lovers of active pastime. …

Open
Another interesting feature of the city that catches the eye is the absence of large and annoying advertising banners. All outdoor advertising here is very moderate and barely visible on building facades and city streets. Locals are proud of their architectural heritage, even though a large part of the historic buildings were destroyed during the Second World War. Those few ancient buildings that have survived fell under the responsibility of the city authorities and are carefully reconstructed. Here they are doing everything possible to ensure that the historical appearance of the city does not suffer under the influence of modern innovations. 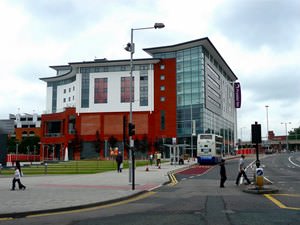 The inhabitants of the city have their own special gastronomic traditions. India has been a British colony for many years, so today Indian cuisine is very popular in many towns across the UK. And Coventry is no exception. In local restaurants, one can taste traditional Indian curry, as well as a lot of other unusual Indian dishes. Many grocery stores offer customers spices and special delicacies for cooking Indian food, which can be very original souvenirs from Coventry.
Cuisine of Coventry for gourmet with top restaurants and cafe
One of the most popular gastronomic places in Coventry is The Royal Oak restaurant, where British cuisine is offered to guests. Nice room design in bright colors, a variety of treats and …

Open
Knowing their own history is a matter of honor for citizens; it is not by chance that Lady Godiva, a historical character immortalized in legends, is considered one of the main symbols of the city. Lady Godiva was the wife of one of the wealthy English earls. She became famous for her proud temper and non-indifference towards the fate of her people. When her husband issued a new decree on raising taxes for the townspeople, the noblewoman tried to persuade him to refuse the decision for several days. 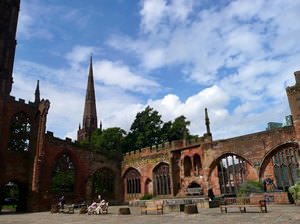 When persuasions did not help, Godiva told her husband that in protest she would strip naked and ride a horse around the city. That evening, she kept her promise. Under such pressure, the Earl was forced to yield to his wife and refuse to raise taxes, and for the inhabitants of Coventry, Lady Godiva became a real national heroine. Even today, they hold a beautiful 3-day festival in her honor every year. Usually, it takes place in July, this holiday is considered one of the most spectacular and noisy.
Excursion over cultural sights of Coventry - 'must visit' points of interest
Coventry prepares an interesting entertainment for its guests; walks to historical sites and visiting museums bring a lot of experience. The oldest building of the city is the Old Grammar …

Open
The festival in honor of the national heroine was first organized in 1678, and since then it has been held annually. On the day of the holiday, in the city one can see people dressed in beautiful historical costumes. In memory of the outstanding event, they hold a solemn procession along the path that the noblewoman has ridden on horseback hundreds of years ago. The procession starts at the old cathedral ruins and ends in the main city park where the statue of Lady Godiva stands. 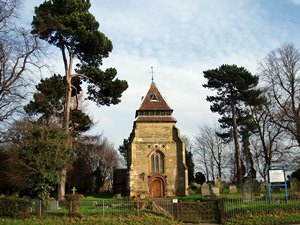 In recent years, the main festival of the city has gained an incredible scale, its program is very rich and lasts three days. Most of the activities take place in the main city park and in the squares, where they organize musical concerts and street performances. The holiday is never complete without gastronomic events and a real medieval fair. One of the most spectacular parts is historical reenactments, the participants of which wear very beautiful medieval clothes.
Your active city break in Coventry. Attractions, recreation and entertainment - best places to spend your day and night here
One of the favorite recreation spots among citizens and visitors to Coventry is the main city park Coombe Abbey Country. It is very large and is an ideal place to relax in the warm season. …

Open
The city holds a Lady Godiva contest, in which the main beauties of Coventry take part. A prerequisite for participation in the beauty contest is long golden hair. On the last day of the festival, a grand firework show is arranged, the preparation for which lasts the whole year. Such good and symbolic holidays are an integral part of the culture of local people, as well as a great way to remind the world of their unique history.

This guide to traditions and festivals in Coventry is protected by the copyright law. You can re-publish this content with mandatory attribution: direct and active hyperlink to www.orangesmile.com.
Coventry - guide chapters 1 2 3 4 5 6 7 8

Cathedrals and basilicas near Coventry
♥   Former Cathedral of St. Michael, Coventry, 3.1 km from the center. On the map

♥   Metropolitan Cathedral Basilica of St. Chad, Birmingham, 24.8 km from the center. On the map

♥   Cathedral of Our Lady and St. Thomas, Northampton, 48.1 km from the center. On the map

♥   Cathedral Church of St. Barnabas, Nottingham, 65.4 km from the center. On the map

Survived castles around Coventry
♥   Castle 'Kenilworth Castle' , 8 km from the center. On the map 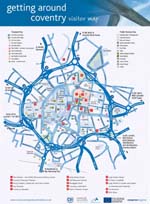 Colors of Coventry in photos

Traditions and festivals in cities around Coventry

Birmingham
The locals have great respect towards their national traditions and follow some of them for already many centuries. For example, if you see a guard in a beautiful uniform near some place of interest, you can be sure that the entire uniform and all decorations are absolutely real. All major sights and attractions of the city are protected by real guards, just like many years ... Open »
Leicester
A few years ago the main festive events were performances of fakirs, and today they are replaced with spectacular fireworks and large-scale performances. However, a lot of people gather to watch the spectacular stunts of tamers of fire. Tourists are also attracted by another national holiday, Leicester Caribbean Carnival. It has no equal in beauty and diversity of recreational ... Open »
Wolverhampton
The city hosts a lot of interesting festivals, which both tourists and local residents are eager to visit. First of all, it is worth noting the Wolverhampton Street Festival taking place at the end of April. At this time, you can see the hospitality and fun reigning around with your own eyes. The program includes the opening of food courts with beer and snacks, gin, cider. ... Open »
Nottingham
The name of the fest makes it clear what is going on during the fest. The festival is devoted to ethnic foods and drinks. An established place of holding the festival is still the Old Market Square. During the festival the square is equipped with tables on which culinary experts perform their foods masterpieces. Cooks and food experts from other countries take part in the ... Open »
Oxford
During the festival the city of Oxford sinks into a unique sweet atmosphere. Numerous tasting events and master classes, new sweets presentations and engaging competitions turn the festival into an engaging sweet adventure. The program of the festival is annually updated and added with ever new events and performances. No matter when tourists visit the city of Oxford as they ... Open »
Luton
The main event of the carnival is a traditional costumed procession. All its participants prepare original costumes on their own. Every year, the original Luton festival changes its theme, according to which the participants sew their outfits. About a thousand people take part in the parade today, while the total number of guests of the holiday is almost a hundred times ... Open »

Cityguide on traditions, mentality and lifestyle of people in Coventry. Learn the best periods to visit Coventry to discover its soul - authentic festivals, events and celebrations. We will also reveal the interesting habits, attitude towards the world and to tourists in Coventry.