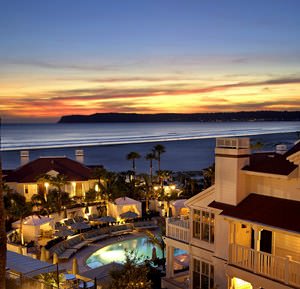 California is ready to offer an extensive range of leisure activities to fans of active recreation and unusual entertainment. There are natural and scenic areas for hikers and modern amusement parks; tourists can easily find sports complexes, shopping malls and nightclubs in every city.
Top hotels in California for business trip or short vacation
San Francisco, Los Angeles and Ontario were always associated with luxury hotels, many of which resemble entertainment and business centers. In total, California has more than 4,500 hotels …

Open
Disneyland remains the center of attraction for children and adults from all over the world. This park was opened in 1955, since then it was constantly changing and updated to surprise visitors with new rides. Since the opening of large-scale amusement park, it was visited by over 500 million people; every day the number of guests is increasing rapidly.
A kind of entertainment center is Universal Studios Hollywood. At the moment it is a large-scale amusement park with a variety of pavilions and attractions associated with filmmaking. Park guests can look on the set, learn a lot about their favorite movies, explore the make-up and take a picture with their favorite characters. Copyright www.orangesmile.com
Guide to California sightseeing - things to see and to visit
California is often called the Golden State due a gold rush and because of the sunny climate inherent to these places. California is popular among travelers and it is very simple to explain …

Open
Those preferring to spend time outdoors would be impressed by Balboa Park located in San Diego. It is considered the most beautiful and charming park in the country. The park is situated close to the downtown and has very calm and quiet atmosphere. It is a true oasis of harmony in concrete jungle; the well-kept park features a rich collection of interesting plants. Talking about natural landmarks, we should definitely mention the mysterious Death Valley, Yosemite National Park and Sequoia National Park. 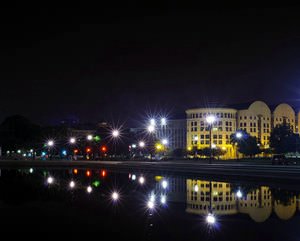 In warmer months, California welcomes fans of beach vacations; coastal cities are ready to offer their guests all the facilities for a comfortable stay. Santa Barbara and Monterey, Malibu and Santa Monica, San Diego and Orange County are known for their charming beaches, water sports centers and incredibly amazing coastal restaurants. In winter, the most attractive areas of the state are the mountainous regions of the Sierra Nevada, where more than 15 attractive ski resorts are situated. The most famous areas are Heavenly, Kirkwood and Sierra; both experienced skiers and beginners would like them.

This guide on active recreation and leisure in California is protected by the copyright law. You can re-publish this content with mandatory attribution: direct and active hyperlink to www.orangesmile.com.
California - guide chapters 1 2 3 4 5 6 7 8

♥   Amusement park 'Rotary Storyland & Playland' Fresno, 36.2 km from the center. On the map

♥   Amusement park 'Kiwanis Kiddieland' Merced, 111.9 km from the center. On the map

Sites around California from our surveys on extreme Earth places 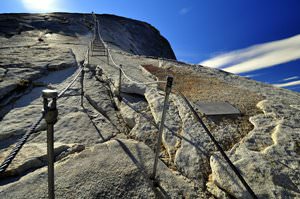 Distance from California center - 108.1 km.
Half-Dome staircase will be an excellent way to experience strength for both ordinary tourists and those who have not been a rookie for a long time. The construction, which runs along the slope of a granite rock, can be called a ladder in the usual sense of the word only remotely. Uneven steps were cut in the rock, many of which were partially destroyed and covered with cracks. The railing at the staircase is replaced by two thin metal ropes - the only support during a difficult climb. … Read further 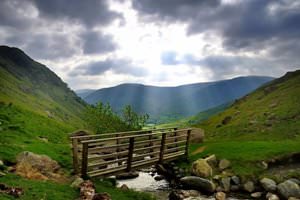 Distance from California center - 114.5 km.
Many researchers claim that nuclear tests in Nevada state have increased the seismic activity of the region. In the second part of the 20th century near the super volcano, in 150 kilometres, was done a series of all-powerful nuclear bursts. Recent years the researchers inspected an extremal upheaval, there were registered constant shocks of earthquake. … Read further

Search for active leisure and attraction spots on California map

Santa Barbara
The club is a perfect place to enjoy friendly atmosphere, contemporary music and try speciality treats of the bar. Dancing enthusiasts will better like the EOS Lounge club which features a great dancing floor. Those tourists who can not imagine a day of life without shopping and sparkling shop windows should pay a visit to the Santa Barbara Certified Farmers Market being the ... Open »
San Francisco
The city of San Francisco offers its guests to visit an excellent brew house named the Anchor Brewing Company. A visit to this popular destination is among the most popular entertainments for many tourists. The brew house offers not only to try the best sorts of beer but to join an exciting excursion. The city features more than a hundred nightlife establishments as well as ... Open »
Hollywood, CA
Hollywood is a place where at every step you can meet celebrities face to face, and fun and joy reigns everywhere. Big starts can also be met while enjoying active leisure activities. In fact, the fun atmosphere does not prevent active sports from enjoying particular popularity. When it comes to active recreation, airplane tours are very popular. For this, many people visit San ... Open »
Beverly Hills
Even though Beverly Hills is a luxury place full of five-star accommodations and boutiques, there are still some exciting and free things to do. For example, tourists can try to spot their favorite celebrities and maybe even get an autograph. Rodeo Drive and restaurants in the Golden Triangle are the best places for that. Rodeo Drive also has an important landmark for all ... Open »
Santa Monica
The Burke Williams Spa, Willow Spa and Alchemie Spa Retreat centers are best worth visiting. In the evening the resort invites its guests to visit numerous night clubs, dance floors and pubs. The Harvelle's Blues club will be an excellent place for blues fans meanwhile the Yankee Doodles club will best meet the interests of bright hot party’s fans. Shopaholics are recommended ... Open »
Los Angeles
Scenic beaches and classy night clubs, upscale restaurants and casinos, luxury boutiques and grand entertaining centers are just a part of the entertainments to enliven the leisure in Los Angeles. The city boasts up to twenty well equipped beaches offering perfect facilities as for active leisure so for tranquil recreation. The most visited beach among travelers is Manhattan ... Open »

Guide to your best city break in California - popular places for recreation and leisure. Things to do during the day in California - attractions, parks, beaches, aquaparks, racing tracks, biking trails or waterski. Recommendations (with addresses, phone numbers and links) where to spend your time in the evening (bars, discos, clubs, etc.). We share some good ideas and the question 'What to do in California?' disappears immediately.