Detailed hi-res maps of Terceira Island for download or print 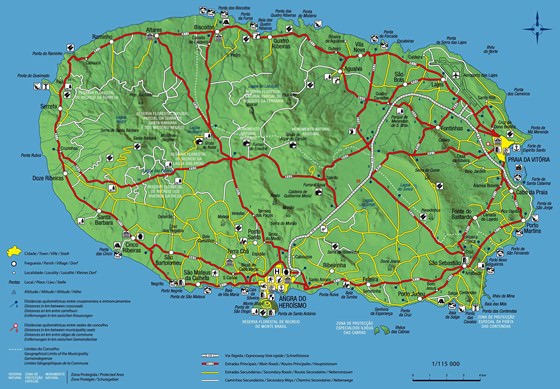 Water transport is very popular. This is not surprising, owing to the country’s geographical state. The most common form of sea transport is ferries. Also, in the height of the tourist season there is an increasing number of excursion liners, pleasure yachts and large catamarans. You can use a taxi and car rental service if you have an international driving license. Nearly every highway is a paid one. The quality of coverage of free roads is not at a high level. Often there is no marking on the road and in the dark, there is no light. … Open

Search for services, infrastructure and sights on map of Terceira Island

Our guide chapters over Terceira Island

Be sure to visit the Restoration Square (Portuguese: Praça dos Restoradores), the main city square, where fairs, executions, meetings of residents and many other important events of the city were held for five centuries. It is worth visiting the main Cathedral of the Sé city, which is considered to be one of the most beautiful local buildings. the You can see several forts on the coast not far from the settlement … Open

The picturesque old town has another upscale hotel that is the best fit for the most demanding tourists, Terceira Mar. This luxury resort offers clients lavishly furnished rooms with panoramic views over the bay of Fana; just a couple of minutes’ walk separates it from iconic landmarks. In addition to comfortable rooms guests can enjoy amazing infinity pools, a fully equipped gym and sports fields. This popular … Open

You can walk along the slopes of the Pico Alto volcano on Terceira, which stopped erupting more than 9 thousand years ago. Alas, you cant look at its crater – it was flooded with lava from past eruptions, so today the sleeping volcano looks like an ordinary mountain range. The highest point of Pico Alto is 808 meters above sea level. The volcano provides a magnificent view of the island and its surroundings. In … Open

A rather unexpected dish in the menu of Terceira restaurants is a rump, which is seasoned with spices and stewed according to the traditional recipe. This part of the chicken, usually almost not used in cooking, is a real delicacy here. Some of the quite traditional dishes are made of yams - sweet potatoes, which are prepared in several different ways and served together with very thin pork sausages called … Open

Traditions and mentality of Terceira Island

Polite treatment begins with the words «señor» or «señora». If you know the profession of the interlocutor or the scientific title, you can mention it. It will be a sign of good manners. Universal greeting here is a handshake, both with men, women and even with children. If you make friends with a local, he can offer you to move to more informal communication, but in this case, the initiative should come … Open

St. Barbara Mount is one of the main mountains of the region and an incredibly picturesque place. While enjoying an excursion there, travelers can see various rare plants and important geological landmarks. Terceira is also famous for its modern golf centers. There are 18 golf courses on the island in total. All the courses are intended for players of a different level, from beginners to experienced players. … Open