Detailed hi-res maps of Madeira for download or print 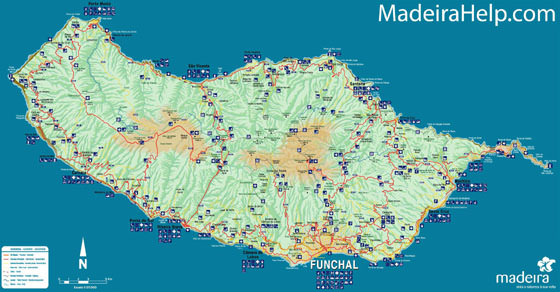 Water transport is very popular. This is not surprising, owing to the country’s geographical state. The most common form of sea transport is ferries. Also, in the height of the tourist season there is an increasing number of excursion liners, pleasure yachts and large catamarans. You can use a taxi and car rental service if you have an international driving license. Nearly every highway is a paid one. The quality of coverage of free roads is not at a high level. Often there is no marking on the road and in the dark, there is no light. … Open

Search for services, infrastructure and sights on map of Madeira

Our guide chapters over Madeira

Madeira for children - what to visit

Madera is popular among tourists due to its luxurious beaches, extensive rainforest and historical sites. Travelers with children will not be bored here. In the town of Porto Moniz, they should visit the Aquario da Madeira. Here you can see all the typical marine inhabitants that live in the coastal waters of Madeira. Among the inhabitants of the aquarium are stingrays, rare species of predatory fish, miniature … Open

Funchal also has one of the biggest and most interesting gastronomic shops of the island - Madeira Tradicional. In addition to bottles of Madeira, the store sells many other gastronomic specialties. The store is combined with a small cafe. Visitors are always invited to try national specialties, as well as popular wines from local factories. A large selection of homemade cookies and delicious cakes is always … Open

There are several closed beach resorts on the island available for a reasonable fee. The resort area Quinta do Lorde located in the southeastern part of Madeira is in demand among connoisseurs of red carpet vacations. It has an equipped pebble beach and an extensive recreation area with swimming pools and a luxury yacht club. Piscinas do Canical resort in the eastern part of Madeira is popular among travelers with … Open

8. Tourists wishing to bring from the trip the wine of local production should better set off for shopping to the specialized stores. These stores feature more attractive pricing for goods. Besides the risk to buy fake goods is minimized in this way. Before making a purchase the visitors will surely be offered to taste the desired sorts of wine. 7. Travelers wishing to explore the natural … Open

Funchal is glad to offer visitors some other activities like workshops (Madeira Cook Experience, Lillie Ceramics), go-karting (Indoor Kart Madeira), laser tag and paintball (Mad Laser, Paintball Madeira). It is worth remarking that it's a pleasure to visit such centers with family or friends. In this way, one can "kill two birds with one stone", (or "matar dois coelhos com uma cajadada", as they would say on the … Open

Weekend in Madeira in original style

Having tried out the amazing pools, head to Madeira's main observation point - Cabo Girão. Few people know that it is the highest cliff in Europe the second highest in the world. The height of the cliff is 580 meters. The cliff offers a stunning view of Câmara de Lobos, and in clear weather, you can even see the landscapes of Funchal. Having climbed such a vertiginous height, get up the nerve to look down. Here, … Open