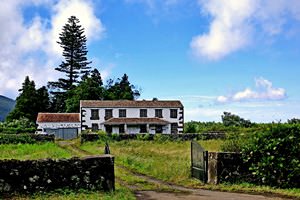 If you have come to the island, be sure to visit the oldest town not only on Terceira but on all of the Azores - Angra do Heroísmo, which the locals often simply call Angra. The settlement was founded in the middle of the 15th century, and since then many buildings of that time have been preserved on its territory and in the surrounding lands. The city of Angra itself is a UNESCO world heritage site. Queen Maria II of Portugal found the refuge here from 1830 to 1833, and she later added the second part of "do Eroismu" to the name of the city, which translates as "heroic" from Portuguese- for the help of local residents in the restoration of the monarchy.
Family holidays with kids in Terceira Island. How to entertain your child, things to show to children.
Terceira is a place where the child will want to come back, despite the fact that there are no special "children's" entertainments such as amusement parks or water parks. If you wish, you …

Open
Be sure to visit the Restoration Square (Portuguese: Praça dos Restoradores), the main city square, where fairs, executions, meetings of residents and many other important events of the city were held for five centuries. It is worth visiting the main Cathedral of the Sé city, which is considered to be one of the most beautiful local buildings. the You can see several forts on the coast not far from the settlement built here to defend against pirates, including Fort of São João Baptista and Fort of São Francisco, which are of the same age as the city buildings. Castle of Moinhos, known as the Castle of São Cristóvão is a gorgeous construction, also built in the 15th century and still well preserved.
Biscoitos is a small town, which was built in the 15th-16th centuries, also deserves your attention. There are vineyards that grow here for hundreds of years and several churches. The oldest of them dates back to the time of construction of the town. Biscoitos Wine Museum is an extremely interesting place, which exposition is dedicated to those who love this drink. Praia da Vitória is a municipality, where you can see the well-preserved building of the municipal council, built in the 70s of the 15th century. There are also several old fountains. You can visit the ruins of the Fort of the Espirito Santo near the town, built in the distant 16th century and destroyed during the Civil War of 1828-1834. Copyright www.orangesmile.com
Cuisine of Terceira Island for gourmet with top restaurants and cafe
Be sure to try the local cuisine during your holidays on Terceira. The island chefs have been modified traditional Portuguese recipes for centuries and have come up with their own. You can …

Open
São Mateus da Calheta is rich with a large number of old buildings. Initially, it was an unremarkable fishing village, but there were started active construction of fortifications due to the threat of pirate raids and the invasion of the Spaniards in 1580 in the surrounding areas. Fort Grande, Fort of the Terreiro, Fort of Negrito, Fort of the Maré, Fort of Má Ferramenta and Fort of São João were completed in the 16th century, as well as the well-preserved Fort da Igreja. Another part of the fortifications in this area was built on the eve of World War II. The main town church is also interesting. Its building is nor remarkable, but, nevertheless, this modest building stands in its place since 1557 in an unchanged form. It is noteworthy that the Old Church, destroyed by a hurricane in the late 19th century, was much younger than the main Cathedral – its construction was completed in 1700. 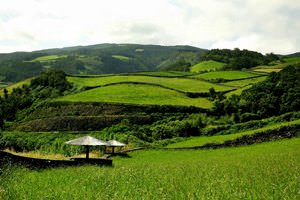 Terra Chã was the scene of partisan battles during the Portuguese Civil War in 1823-1834, colonial wars and World War II. The local campus of Angra was a military hospital for most of the 20th century, where were treated employees of the expeditionary military forces of Portugal, England and the United States during the World War II and soldiers who returned from Africa during the colonial wars. There are mansions where the Portuguese aristocrats – Solar dos Corvelo, Quinta de Nossa Senhora do Rosário and Quinta da Boa Hora stayed. The estates of these landlords were made up of a house, large yards with manicured gardens, orchards, vineyards, pastures and water fountains. There are sacral buildings of 17-19 centuries, including the Chapel of Nossa Senhora da Boa Hora – constructed in the 17th century, the Chapel of Nossa Senhora do Rosário and Império do Espírito Santo do Terreiro, where people honour the Holy Spirit.
Authentic traditions, festivals and lifestyle of Terceira Island inhabitants
Once on Terceira, remember that locals love their small homeland and their national traditions. Moreover, they cannot tolerate all comparisons with the neighbours. They are especially …

Open
Altares is famous for its Church of São Roque, built in 1480. The church is located on an elevated terrain occupied along with the parochial school, Museu Etnográfico dos Altares, with an important collection of instruments associated with agriculture and traditional Azorean activities. Moreover, the museum has a collection of samples of local flora and fauna. Império of the Holy Spirit of Altares is dating to the early 20th century. It is used for celebrations of the festivals associated with the Cult of the Holy Spirit held annually by the Brotherhood of the Holy Spirit.

This guide to cultural sights Terceira Island is protected by the copyright law. You can re-publish this content with mandatory attribution: direct and active hyperlink to www.orangesmile.com.
Terceira Island - guide chapters 1 2 3 4 5 6 7 8
Reference information
Map of all palaces

Public palaces near Terceira Island
♥   Palace 'Palace of the Bettencourts' , 7.6 km from the center. On the map

Due to its proximity to the Dark Continent, the southern part of Portugal is often called “Africa in the space of Europe”. Tourists will notice the influence of Arab culture here. Pleasing to the eye with its combination of clear sea shore and snow-white sand, the province of Algarve is suitable for a beach holiday. Lovers of religious sites will find appealing the city of Faro. Here, you will find; the monastery of the Assumption of the Virgin, St. Francis, the Collegiate Church and the churches of St. Peter and Carmo. Admirers of natural beauty will be satisfied with a visit to the sea museum, ethnographic heritage and local history. The natural reserve of Ria Formosa will surprise tourists with its exotic vegetation and rare species of animals. … Open

Excursions over cultural sights of neighbours of Terceira Island

Graciosa
Besides, there was a true pirate fiefdom here in the 16th-17th centuries. The island was controlled by Spain, and Spanish and English privateers were fighting each other in the local waters to the death and, of course, attacking merchant vessels too. There even still some ships lying in the local area which sank in those times. And when it’s really stormy, equipment and ... Open »
Azores
Travelling around the Azores will bring a lot of wonderful memories. Each of the islands is home to unique natural and historical attractions. San Miguel is the largest island of the archipelago. On the island travelers are recommended to visit old palaces of the 17th century, the church of St. Sebastian and a treasury located next to it, and Carlos Machado Museum. Fans of ... Open »
Pico Island
Ilha do Pico is sometimes called simply Pico. Portuguese began to settle the island in the 15th century, along with the rest of the Azores archipelago. When more settlers arrived to the island, local lands became more attractive for pirates. For protection from attacks of sea robbers, Santa Catarina Fort was built near the city of Lajes Do Pico at the end of the 15th century. ... Open »
Ilha do Faial
Faial is one of the islands of the Azores archipelago. This is a beautiful place that attracts many tourists every year. It is also called "Hydrangea Island" or "Blue Island". The fields planted with these magnificent bright blue flowers amaze almost everyone who comes here. Eco-tourism is particularly developed here. Travelers come here to see the volcanic craters and valleys ... Open »
Sao Miguel Island
There are several quite old productions on the territory of Sao Miguel. For example, famous winery Quinta da Jardinette is located in Fenais da Luz. Here you can try several varieties of local wines, buy souvenirs, and join the excursion which will take about an hour. The manager will tell you a lot of interesting things about how wine-making appeared on the island, how it ... Open »
Madeira
Every city of Madeira features plenty of unique landmarks and sights. To fully embrace the beauty and cultural traditions of the island the travelers should take a general sightseeing tour through the major cities and enjoy the historical landmarks. The capital of the island, the city of Funchal attracts most tourists as its territory has preserved a vast number of ancient ... Open »