Detailed hi-res maps of Graciosa for download or print 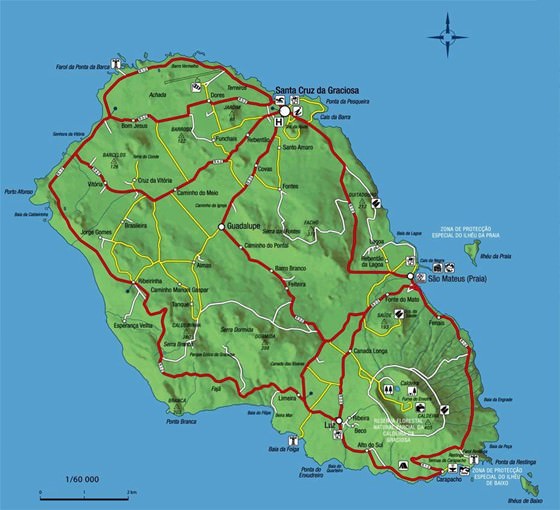 Trams and lifts are equally popular in Lisbon. There is a metro in the capital. At the moment, there are only four subways that connect the city center with the most significant areas. The country’s air transportation is also developed at a high level. There are several major international airports which operate in the country, but the internal displacement is poorly developed. The most popular flights are the ones which connects the mainland of Portugal with the island part of the country. … Open

Search for services, infrastructure and sights on map of Graciosa

Our guide chapters over Graciosa

There are no pieces of architecture older than five-and-a-half centuries old here on to Graciosa Island. The reason is simple: the archipelago is located quite far from the mainland, so nobody was living here before Portuguese navigators came. The colonization of the island started in the second quarter of the 15th century. Ordinary Portuguese looking for a better life as well as bourgeois who were hoping to start … Open

The hotel Graciosa has a beautiful panoramic swimming pool and state-of-the-modern gym. Its stylish restaurant serves many author's dishes and national delicacies. It should be highlighted that the hotel is suitable not only for relaxing vacation but also for work. The guests of the hotel can use equipped with modern technology meeting rooms and seminars. The hotel Graciosa suits for all travelers. The location … Open

One more unique place here is a sulphuric cave. It’s located in the extent volcano’s Furna Do Enxofre crater. There is an extremely beautiful lake there and about 80-meters-high vault of volcanic origin. The entrance is free, however, if you’d like to get the maximum information about the grotto and its origin, it would be better to pay a guide. For those who love making photos, the best time for … Open

And don’t forget to try Piri Piri – Portuguese chicken. Moreover, local chefs also like cooking stewed peppers stuffed with various fillings: meat, fish or vegetables. Then, there is another peculiar dish – marinated pork liver. To those tourists who are keen on everything exotic, we would recommend trying local blood sausage. Common European steaks or baked meat with cheese are also served in local … Open

Traditions and mentality of Graciosa

As you decide to go to Graciosa Island, remember that locals are Portuguese and extremely proud of it. Despite this lasting neighbouring with Spain, people here don’t like to be compared with that country. So, it’s better not to speak Spanish with the locals. They strongly believe that those people who speak it are just not aware of Portuguese. Thus, learn a few common useful phrases in Portuguese or just … Open

Travelers, who are indifferent to fish and seafood, will be charmed by local pastries. Queijadas da ilha graciosa is a popular dessert on the island. This dish is somewhat reminiscent of traditional cottage cheese pancakes. The island is also famous for its special type of sweet bread that is called massa sovada. Lamperia de ovos is one more popular national dish that is cooked from eggs. On Graciosa, there are … Open