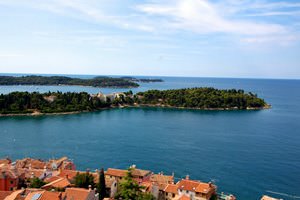 Climb the Bell Tower of Church of St. Euphemia

There are hills in Old Rovinj. The Church of Saint Euphemia was built on top of it several centuries ago. She was executed for her devotion to Christianity in the fourth century. The statue of the great Martyr is installed on its spire. It is cast from copper. Her relics are located in the church itself. Access to the shrine is opened once a year on September 16. The servants of the temple claim that the relics of the Holy woman have healing power.
Advices to travellers: what you should know while being in Rovinj
1. Street call boxes and telephones at post offices offer the most profitable rates for intercity and international calls. Street call boxes accept special plastic cards, which can be bought …

Open
The building, built in the Baroque style, is one of the main attractions of the city today. You can go inside the church any day of the week. There are stairs there. It is made of wood. You will climb it to its bell tower. It has a height of 62 meters. You can enjoy the amazing panoramic view of Rovinj and take beautiful photos standing on it.

You may be interested in water sports, including scuba diving in the Adriatic Sea. You can explore reefs, underwater caves, and rocks. You can quickly do this if you come to one of the beaches located in the vicinity of the city. For example, you can go to Villas Rubin beach. There are water ski rentals, a pool, and a Puffer diving school there. Copyright www.orangesmile.com
Guide to Rovinj sightseeing - things to see and to visit
This is one of most romantic cities in Croatia, which is often called "the pearl of the north". Right from the first moment you will be enchanted by cozy streets, beautiful and unusual …

Open
There is the island of St. Catherine opposite the old part of Rovinj. You can get there in 5 minutes by water taxi. You will get the opportunity to admire the beautiful view of the city, to undergo a short training in the diving center, and rent a windsurf board. You will be able to get a thrill at the Belistra Water Sports center. You will do parasailing there. If you are a fan of extreme diving, you can see the Austrian vessel of Baron Gautsch. It sank in 1914. You can also see the British minesweeper Coriolanus. It was hit by a mine in 1945. 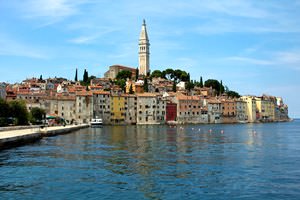 You might be interested in taking a tour of the Batana eco-museum. It is open to the public from 10 am to 2 pm and from 7 pm to 11 pm on any day of the week throughout the summer. Its exposition is dedicated to the boat of the same name. It is made of wood. This boat is traditional for fishermen living in the city. The exhibition is also dedicated to their professional community. You can get acquainted with the traditions of Rovinj, enjoy beautiful songs, and see many interesting exhibits if you visit the museum. Most of them were donated to Batana by the local population. You can take a ride on the legendary boat in the company of a fisherman in the evening hours.
Cuisine of Rovinj for gourmet with top restaurants and cafe
Rovinj will please foreign guests with a variety of Croatian restaurants and numerous gastronomy establishments of other culinary trends. The Tipico restaurant offers its guests to enjoy …

Take a Ride on the Water Rides of Istralandia Aquapark

Istralandia Water Amusement Park is located 55 kilometers from the city. It was opened in 2014. The park is open from the first days of June until September 15. If you visit it, you can swim in a regular pool and surf in a pool with artificial waves. You will also have the opportunity to learn how to dance, play volleyball, see professional artists perform, and take part in fun activities with animators. You can make a descent from 20 different slides in the water park. The most extreme and popular among tourists are the Skydiver slides, Blackhole, Fantasy Holly, Freefall, and Family Rafting. 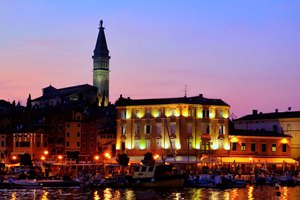 You can leave the city by water taxi. You will spend a quarter of an hour on the way and reach the island of Crveni Otok. 180 species of plants, including coniferous trees, grow there. If you come here, you can rent a sailboat or motorboat, as well as play sports on one of the specially equipped playgrounds. Crveni Otok consists of 2 Islands with pebble and rocky beaches. This is St. Andrew Island with the Istra hotel. There are swimming pools on its territory. Maskin Island is also part of Crveni Otok. The beach for nudists is located there.
Excursion over cultural sights of Rovinj - 'must visit' points of interest
The St. Euphemia’a Basilica is the main religious symbol of Rovinj and the most remarkable religious landmark in Europe. Its construction was started in 1725 and lasted for 11 years. …

Dvigrad fortress was built to protect Rovinj from Venetian troops in the 11th century. Later it became a city. It became abandoned because most of the population died during a plague epidemic in the 17th century. Only the main tower and walls remain in the city today. You can go here for a guided tour. You can look at the tombstones and ruins of buildings during the tour. You will have the opportunity to go rock climbing as the fortress was built on a rock. You will choose one of the routes that run along its southern slope.

This article about ideas on extraordinary weekend in Rovinj is protected by the copyright law. You can re-publish this content with mandatory attribution: direct and active hyperlink to www.orangesmile.com.
Rovinj - guide chapters 1 2 3 4 5 6

Michelin-starred restaurants in Rovinj
♥   Restaurant 'Batelina' Banjole. Type - Fish and seafood. 33.5 km from the center. On the map

♥   Restaurant 'Zigante' Livade. Type - Traditional cuisine. 34 km from the center. On the map

Survived castles around Rovinj
♥   Castle 'Dvigrad' , 14.5 km from the center. On the map 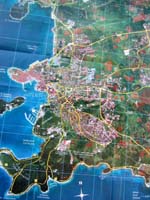 Venice
How can one of the most romantic cities in the world amaze even experienced travelers? Most probably, beautiful canals and rides in beautifully decorated gondolas are not enough. However, do not hurry to decline an opportunity to enjoy an exciting ride on Venice canals. There is a wonderful motor boat renting station on Canarreggio Street, building 331. The price of renting a ... Open »
Bologna
Tired of going on the tours during the daytime? It's time to change the good old tradition and go on an evening walk through Bologna. With the onset of darkness, its picturesque streets are illuminated by incredibly beautiful lighting. In the light of street lamps, the familiar historical monuments look quite different. Cannot imagine your vacation without shopping? Take ... Open »
Florence
It’s more exciting to make a stay in Florence more diversified by visiting unusual places and landmarks. Do not limit yourself to a standard excursion program. When mentioning the most unusual places of interest in Florence, Officina Profumo Farmaceutica di Santa Maria Novel should be mentioned first. The pharmacy is attended not only to buy medicines as a visit to it can ... Open »
Salzburg
The old and aristocratic Salzburg is suitable not only for sightseeing and admiring historic landmarks. There are many unusual and even odd places of interest in the outskirts of the city, and the Eisriesenwelt ice cave is one of them. One of the entrances to the cave is located in the immediate Salzburg suburbs. Eisriesenwelt is the largest ice cave in the world and has the ... Open »
Milan
If you crave some extreme and the idea of visiting the scariest place in Milan sounds appealing, safely head to Chiesa di San Bernardino. The church looks quite usual at a glance, but its inner premises hide the terrible truth – during the construction, all inner walls of the building were made of human skulls and bones. Initially, the building was used as a crypt and so dead ... Open »
Rome
There is a secret street in Rome - via Piccolomini - the unique characteristic of which is known only to some travelers. This street offers a panoramic view of the St. Peter’s Basilica, the one that is seen through the keyhole of the old metal door. However, the main peculiarity is not in the view. During a walk on the street, you will notice a fascinating optical illusion. ... Open »

Walk through hidden local streets, sneak to a small cafe, breathe and enjoy Rovinj from inside. Stay out from the beaten track during your city weekend, discover the soul of Rovinj as a real travel gourment. Follow our guide, take one of the exclusive services and spend your time in Rovinj unforgettably and with a full passion!