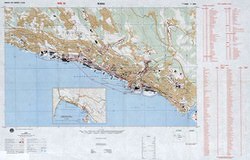 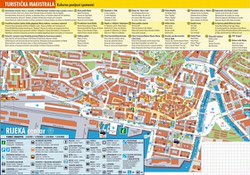 Interactive maps of hiking and biking routes around Rijeka

1. You can zoom in/out using your mouse wheel, as well as move the map of Rijeka with your mouse.
2. This interactive map presents two modes: 'Biking Routes' and 'Hiking Routes'. Use the '+' button on the map to switch between them.

This Rijeka map has two modes: 'Railway Network' and 'Landscape & Rural Map'. Use the '+' button on the map to navigate.

Our guide to Rijeka

The largest port city in Croatia and a major transportation center, Rijeka is also a popular tourist area. The central part of the city, which is called Korzo, is the most notable in Rijeka. There is absolutely no transport here and all streets are pedestrians only. During your walk in this city you will be able to see most popular shops and restaurants, visit new movie theaters, or simply relax in a park. One of … Open

In the neighbourhood is located Risnjak National Park which is considered one of the most beautiful in Croatia. The park was founded in 1953 and initially had an area of about 30 sq. km. Nowadays, it's twice as large. They organize walking tours there, during which you can admire the majestic oaks, plane trees, and see rare Mediterranean plants. The wildlife of the reserve is very rich. A small hotel and restaurant … Open

Maps of Opatija
Thalasso Wellness Centar is sure to please visitors to Opatija with its excellent wellness, physical, and spa treatments. This is one of the favorite spots for tourists who want to get some quality rest on vacation (of course, apart from the beaches the Croatian city is famous for). Jacuzzi, massage rooms, lounges, swimming pools are available for its guests. If you want to ... Open »
Maps of Krk
Boa is considered the most stylish nightclub; this is an ideal place for those who prefer to spend time in a stylish and sophisticated ambience. Two attractive nightclubs are located in the center of Malinska, those are Volsonis and Jungle; each of them is ready to offer visitors an interesting evening program and a large selection of treats. As for the shops, they can be ... Open »
Maps of Cres
Cres island is a perfect place for long walks. For example, you can spend a day to explore the local nature park located close to Vrana Lake. The lake is a protected area and there are more than a hundred different birds and some of them are endangered species. For instance, a red heron, small and big white-faced herons and a small cormorant. However, Vrana Lake itself is an ... Open »
Maps of Istria
While Istria has always been a fairly calm region, nightlife fans won’t feel difficult to find a suitable place to stay. There are not so many noisy discos here, but numerous popular restaurants and bars offer vacationers interesting entertainment in the evening. In conclusion, it should be said that the region is famous for its unique climate, which is productive for people ... Open »
Maps of Trieste
It’s worth to start a story about entertainment places of Trieste with Civico Acquario Marino. It is an amazing place that will be interesting for all family members. This aquarium is extremely popular among families with young children. This is a beautiful and peaceful place, where you can take refuge in bad weather and watch the colorful fish. Enthusiasts will enjoy a range ... Open »
Maps of Porec
Porec can please lovers of shopping, during the walk in the city they can find various souvenir shops, boutiques and markets. Interesting memorable presents can be bought almost on every beach, there are souvenir shops in every popular seaside districts without fail. Also the wine of the local production and olive oil are popular memorable presents too, it is possible to buy ... Open »
OrangeSmile.com - online travel reservation expert providing reliable car rental and hotel booking services. We feature more than 25.000 destinations with 12.000 rental offices and 200.000 hotels worldwide.
Secure Server