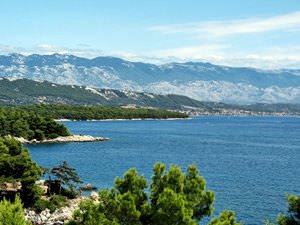 The cuisine of the Rab island, like all of Croatia, is very similar to any Mediterranean cuisine. The chefs prefer to use fresh vegetables, meat, and fish along with olive oil and herbs, which give the dishes an unusual flavor. Local dishes usually do not have a very exotic taste, so you can be sure that the food will not be completely unfamiliar. Fish and seafood are very popular on Rab, which is natural for an island territory, but you can also find meat courses here.
Excursion over cultural sights of Rab Island - 'must visit' points of interest
The island of Rab was settled by the Illyrians in the 4th century BC. Later, the Romans built a fortified port here and called this place Felix Arba, or "happy". Rab belonged to Byzantium, …

Open
Croatian cuisine is known for its passion for alcoholic beverages, especially wine, and therefore, you should order at least one glass of this grape nectar for a truly local dinner. There are many wines here, so you should better ask the waiter, which one will suit the dish you ordered best. If you want to try the soup, then note that most of the local first courses are quite light and are prepared on the basis of chicken or vegetable broth. Chorba or manestra can become more satisfying options for soup. Chorba is distinguished for being based on fresh dairy products, and manestra is actually a Croatian version of the Italian minestrone. You shouldn’t compare those two dishes in front of the chefs – the locals don’t like this at all.
Another original stew soup is brodet, one of the most iconic dishes of the Croatian cuisine. Fish, seafood, and vegetables are put in a special dish and stewed in wine until almost all the liquid is evaporated. It is usually served with polenta, corn porridge. For centuries, this dish was the dish of the poor, and even though brodet is now served in any Croatian restaurant, there is no common recipe for it. It is worth trying black rizhot, rice with seafood, which has black color due to the cuttlefish ink. Copyright www.orangesmile.com
Your active city break in Rab Island. Attractions, recreation and entertainment - best places to spend your day and night here
If you like to swim and sunbathe, then try to go to the Lopar area. The fact is that here you can find not one or two, but almost two dozen different beaches, so choosing the one that you …

Open
When ordering fish courses, pay attention to the price – it can be indicated per serving, per 100 grams or per kilogram. It is clear that in the last two cases, the sum in the check will be totally different than in the menu. Among fish, you can try catfish, dorado, sea carp, fish-devil, also known as shkarpena, sea bass, flounder, red mullet, horse mackerel, and scomber. Here they are usually baked in the oven, or grilled, or fried on an open fire. Most often, the waiter will clarify how do you want your fish to be cooked. Oysters, mussels, lobsters, and octopuses also play an important role in the cuisine of Rab. You can find them on the menu of any restaurant. 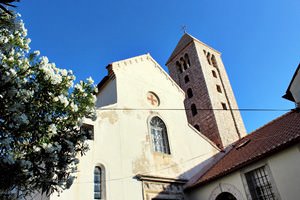 Among the meat courses, you should definitely try prsut, pork ham, which is first smoked on charcoal, and then dried on the sun. It is usually served thinly sliced, with cheese, olives, and onions. Also taste young lamb in sheep's milk, visovacka begavica. Pasticada – beef in wine, and chobana from beef and pork are also tasty. As a side dish, the Croats usually serve potatoes, tomatoes, pasta, artichokes, and cabbage.
Best beaches and recreation areas around Rab Island
A choice of beaches on the island of Rab is very large; there are sandy, pebble and rocky sections of the coast, as well as many great wild beaches featuring pristine beauty. The most …

Open
Among the desserts, you should definitely try the Rab Cake. This dish was invented here many centuries ago and they were not ashamed to serve it even to the royalty. Now, any traveler can briefly become a king and taste this dessert, the exact recipe of which has still not been disclosed. Fritule cookies, almond cakes, chestnut dessert, and cukariny are also worth your attention. From alcoholic beverages, in addition to a wide variety of wines, both factory and domestic, you can find good Ozujsko and Karlovacko beer on the island. There are also Vignac cognac, Maraschino cherry liqueur, herbal tinctures Biske, Travarica, Komovica, and plum brandy Sljivovica.

This guide to cuisine and restauraunt in Rab Island is protected by the copyright law. You can re-publish this content with mandatory attribution: direct and active hyperlink to www.orangesmile.com.
Rab Island - guide chapters 1 2 3 4 5 6 7 8 9

Croatia is known not only for its cuisine, but also for its winemaking traditions. Croats drink quite a lot of wine. The most popular varieties are Malvasia, Pinot, Proshek, Teran, and Posip. Croatian wine has a vivid taste; it’s rated higher than Italian wine. The whole world knows Croatian tincture Slivovitsa based on plum juice. No less famous is the traditional Croatian brandy - Vinjak. To plunge into the real atmosphere of the Croatian feast, it is worth looking into the traditional tavern, Konoba, where all dishes are cooked of home ingredients. The unique homely atmosphere is complemented with a cozy fireplace, which is an indispensable attribute of such a place. … Open

Searching where to eat - restaurants and cafe on Rab Island map

Cuisine and restaurants in the neighbours of Rab Island

Losinj Island
The latter is usually dipped in local vodka rakija. Among alcoholic beverages, besides vodka, you should try light beer, liquors, and wine. There are a lot of varieties of a drink from grapes, so you should choose the one that you like, or ask for an advice from the waiter. The infusions on herbs like Biska, Travarica, Komovica, and plum brandy Slivovica will please those ... Open »
Pag Island
Croats prefer to eat low-fat desserts. Local cakes are like puddings and you won't gain weight. Don’t pass by međimurska gibanica, a layer cake with apple, poppyseed, walnut and cottage cheese fillings and rapska torta (rab cake) which original recipe is secret information. You can easily find coffee and juice on the island. The most popular Croatian hard drinks are local ... Open »
Cres
There are many restaurants on Cres where you can order a large number of fish dishes. It is not obvious because the island is surrounded by the sea. Try a salad made of octopus or lobster. Fish is fried, boiled and baked here. The most popular white fish is sea bass, flounder and a scorpion fish. Mussels, oysters, shrimps and octopus can be found everywhere on Cres. Croatian ... Open »
Dugi Otok
Potatoes, tomatoes, cabbage, artichokes, and asparagus are most often used from vegetables. Croatian cuisine is not inferior to the Italian one in terms of a variety of pasta types. In addition to the usual varieties, you can meet the so-called mlinci in some places. These are small squares of dough. First, they are baked in the oven and then boiled in water. This type of ... Open »
Opatija
A popular eating house named Kamelija is a perfect destination as for vegetarian diet followers so for meat dishes addicts. Its visitors are offered several menus each of them featuring dozens of daintiest treats. In addition to chosen dishes the visitors of the restaurant are offered a good selection of wines. The Kamelija eating house possesses its own wine cellar. A popular ... Open »
Istria
Sheep cheese is also a quite bright culinary symbol of Istria. It is a versatile product that is added to salads and meat dishes, as well as served as a dessert with red wine and honey. Seafood lovers will be delighted with an abundance of oysters and mussels; the fact that the Lim canal is the largest center of production. Here there are large mussels farms; latter are ... Open »

Travel notes on best cuisine and restaurants of Rab Island (Croatia) on OrangeSmile.com. Famous recipes and traditional dishes and courses in Rab Island restaurants. Where to eat - our recommendations on popular places in Rab Island, where you can taste delicious meal and also spend a good time with your friends.