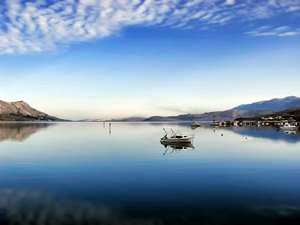 Despite the fact that the island reached its heyday in the middle ages, archaeological findings show that it was inhabited in the ancient times. All of the main amazing buildings are located in Pag Town and Novalja, the largest settlements of the island. Almost all of them are dated back to the 13th-16th centuries. That’s not surprising because Béla IV of Hungary made Pag a free royal territory in the 13th century and the island thrived for 2 years. Later there was a battle for leadership between Croatia and Venice, and a few centuries later the island was under the protectorate of Austria. Then Pag became a part of Yugoslavia, and only after its collapse Pag became a part of sovereign Croatia.
Top hotels in Pag Island for business trip or short vacation
Island of Pag offers its guests more than a hundred of accommodation places from budget ones to luxurious hotels for the most demanding tourists. Lasturac hotel in Novalja is an excellent …

Open
Many of the landmarks can be found in Pag Town, the capital of the island. It is remarkable that the local government started to build a «new» Pag in the 15th century in order to protect the settlement from the pirate raids. It was located not far from old Pag. Giorgio da Sebenico, a famous Croatian architect started to project the new fortified settlement. Despite the constant threat from the sea, the inhabitants of the island managed to save a lot of ancient buildings. In the old part of Pag, you can see a well-preserved Romanesque Church of the Assumption, built in 1192 and the ruins of the Franciscan Monastery built in 1318. A beautiful legend is connected with the monastery. It is believed that the water appeared in the reservoir of the monastery during a draught.
You can see the ruins of Kula Skrivanat (Skrivanat Tower) in the northern part of «new» Pag. It is the only remained tower which protected the town. During its building in the 15th century, the tower located just 50 metres from the seacoast. A great variety of workshops and events for tourists takes place here in summer. The Church of Saint Francis is located near the eastern gates and the Church of Saint George is located near the northern gates. The second one was thoroughly rebuilt in the 16th century. The church still functions and it is also used as an exhibition space. Copyright www.orangesmile.com
Shopping in Pag Island - main shopping streets, outlets and boutiques
One of the most popular souvenirs you can bring from Pag is Morcic jewellery. Brooches, keychains, pendants and earrings in the shape of the Arabian head appeared in Croatia many centuries …

Open
The Church of Saint Mary and the princely court are located on the central square of the town. The Princely Court was a residency of a local executive who was assigned by the Venetians in the 15th century. Nowadays various exhibitions, plays, festivals and concerts are held in this two-storey building. You can visit the old part of the town and admire one of the first European sun clocks here. A marble cross is one more local attraction, it is located not far from the town at the place where the island is crossed by the 15th parallel.

Novalja is famous all over the world because of Zrce Beach. It is very popular among young people who love dance music. However, the town itself has a rich history and many ancient landmarks. You can see a ruined wall, late antique acropolis and early Christian Church of the Holy Cross. Be sure to visit the Museum of the Town of Novalja. It is located in the second largest town on Pag, Novalja. There are different clothes, household items, weapons and armour found on Pag at different times. Moreover, there are Roman, Croatian, Venetian and Austrian artefacts. A large part of the collection is dedicated to World War II.
Guide to Pag Island sightseeing - things to see and to visit
Island of Pag is the one of the most famous resorts of Croatia; it’s extremely popular among both local citizens and foreign tourists. Local cheese and crafty laces hand made by local …

Open
The most interesting attraction in Novalja is a Roman aqueduct. It was built in the 1st century AD during the reign of the Roman Empire. The tunnel is carved out of solid rock and its length is 1042 meters. It is a complex buildings constructed by Roman engineers. Archaeologists found the mark of the Roman workshop « Afaesonia» on the bricks. Several attempts were made in 19th and 20th centuries in order to continue the building of the aqueduct, but they were not successful. Nowadays the aqueduct is under the exploration of the scientists.

In the section below, you can get one of our excursion, activities or city discovery tours over Pag Island and surroundings. Our website offers 10-30% lower ticket prices, when compared to the offline purchase on the spot.

City tours, excursions and tickets in Pag Island and surroundings

This guide to cultural sights Pag Island is protected by the copyright law. You can re-publish this content with mandatory attribution: direct and active hyperlink to www.orangesmile.com.
Pag Island - guide chapters 1 2 3 4 5 6 7 8 9
Reference information
Map of all churches

Cathedrals and basilicas near Pag Island
♥   Katedrala sv. Stošije (Anastazije), Zadar, 50.2 km from the center. On the map

♥   Crkva sv. Filipa i Jakova, Novi Vinodolski, 69 km from the center. On the map

Excursions over cultural sights of neighbours of Pag Island

Rab Island
The fragments of a Benedictine monastery, built around the 11th-century, have survived to this day. Unfortunately, the building itself did not survive the test of time and now only ruins remained of it. Nevertheless, the monastery bell tower of St. John the Evangelist, built in the 12th-century, was restored in 1933 and is now available for viewing by all visitors. It is ... Open »
Losinj Island
For all who are interested in the sea, it is worth visiting the Kula Museum. In addition to a large number of various exhibits related to the sea and seamen, the museum is famous for interesting thematic events and workshops. In the churches of St. Mary and St. Antun Opat Pustinjac, you can see not only the church furniture of past centuries but also the pictures of various ... Open »
Dugi Otok
Fans of architectural monuments will also find something to see here. You should definitely visit the largest lighthouse in the Adriatic Sea. This is Veli Rat. This is an active lighthouse with more than a century of history. A majestic 42-meters-high column is located on the picturesque spit. It is one of the most recognizable symbols of the island. You can go up to the ... Open »
Zadar
The building of the city hall is the most interesting architectural monument located near the square. Ancient city gates remain the permanent symbol of Zadar. The gates were built in 1543. Their appearance resembles a graceful triumphal arch, and the gates are decorated with two important symbols - the emblem of Zadar and a winged lion. Roman Forum is a very popular ... Open »
Krk
Medieval fortifications and dense forests, old churches and museums, ancient ruins and priceless mosaics of the Roman Empire are the main attractions of the island of Krk. Numerous historic sites are concentrated in the capital of the island, the city of the same name. The most striking monument of history is Frankopanska castle built in the 12th century; it has perfectly ... Open »
Cres
One of the oldest settlements on the island is Beli. It a small village located on the hill. There are ruins of ancient baths and a bridge. The second one is a unique construction in this part of Croatia. One of the main attractions in Beli is an Early Roman church built on the ruins of an ancient building. Be sure to visit the Church of Saint Mary with a small museum and an ... Open »

Culture guide to Pag Island. Which fascinating sights to visit once you are in Pag Island: temples, churches, museums, theaters and castles. Recommendations (with addresses, phone numbers and links) on the places 'must visit' in Pag Island. Plan your own city excursion by using this page info!