«« BEGINNING - PART I
Video of flights over top monuments of New York in HD format.
Use 'Full Screen' mode.
Any review of the architecture of New York would be incomplete without mentioning Statue of Liberty, Chrysler Building, Cathedral of Saint John the Divine, Riverside Church, 1 World Trade Center and many others. The virtual flight over these monuments in HD (the video is on the left), the photo galleries of New York, and the most interesting facts about every sight – we have carefully prepared lots of useful information for you. The overview architecture map of New York at the bottom of the page will help you not to get lost in your sightseeing routes of New York. So, let’s go! 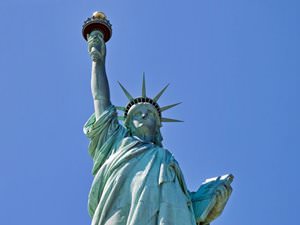 Facts:
» The Statue of Liberty is located on Liberty Island and is one of the most famous sculptures in the USA and in the world as well.
» The Statue of Liberty is often called the symbol of New York City and the United States, the symbol of freedom and democracy, and the Liberty Lady. That was a gift of the French on the centenary of the American Revolution.
» The goddess of freedom holds a torch and a tablet and stands with one foot on the broken chains. The date of the Declaration of Independence is carved with Roman numerals on the table.
» The height of the statue from the ground to the tip of the torch is 93 meters; the height of the statue itself is 46 meters.
» The monument is open for visitors. Overcoming 356 steps of a stairway you can climb to the crown of the statue, which offers extensive panorama of New York Harbor. 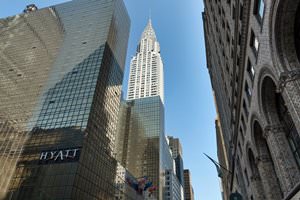 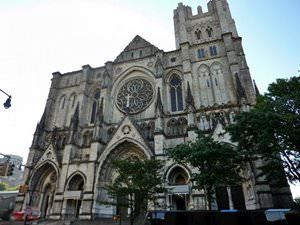 Facts:
» The Cathedral of St. John the Divine is situated on Manhattan.
» The cathedral has being built for more than a century; it was founded in 1892 and its construction still isn’t complete.
» Doors of the Cathedral are made of bronze and weigh 3 tons. Doors are decorated with about 60 scenes from the Bible; scenes from the Old Testament can be seen on the left side and the New Testament - on the right.
»  The cathedral features 7 chapels dedicated to folks who came to New York in the year of foundation of the temple.
» Franklin Delano Roosevelt was the chief of the committee raising funds for construction of the cathedral; eight years later he became the president of the United States. 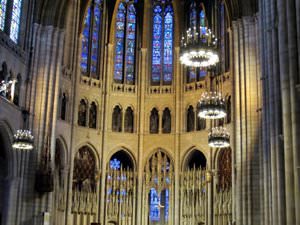 Facts:
» The Bell Tower of the church is considered the largest in the world. It has 74 bells.
» One of the bells is up to 20 tons in weight and has the strongest resonance in the world; it’s also considered the largest bell in the world.
» The church has eight panels devoted to different personalities (Michelangelo, Socrates) whose lives reflect the teachings of Christ.
» The Riverside Church was built on the dime of Rockefeller Jr.
» The tower above the main entrance makes the church the highest in the United States, as it reaches 119 meters. The tower has 22 floors and includes residential and office space, as well as Sunday school.
» The church seems old from the outside, but inside it’s designed as an office building with elevators, underground parking and air-conditioning.
» The building includes not only the temple, but also a kindergarten, library, auditorium, sports and conference facilities. 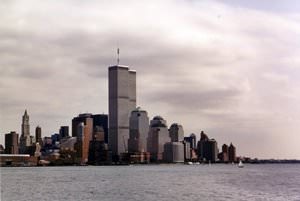 Facts:
» 1 World Trade Center is the central building of the new World Trade Center complex. New Yorkers call it the Freedom Tower.
» Initially, the original idea to construct the tower of concrete has been criticized within the framework of fear of the new attacks. That resulted in the nickname of the building, the Tower of Fear.
» The tower is crowned with 124-meter spire weighing 758 tons that serves as the transmitting antenna.
» Building height of 1,776 feet isn’t accidental; it emblematize the year of the Declaration of Independence.
» New World Trade Center became the tallest building in the United States, as its height with a spire is 540 meters. 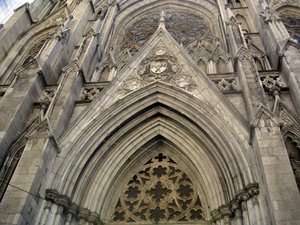 Facts:
» The St. Patrick Cathedral is one of the largest Catholic cathedrals in America.
» Cathedral Gate is made of bronze and weighs more than 18 tons, but it’s so well balanced that can be opened with one hand.
» The main relic is the image of the Virgin of Guadalupe.
» The cathedral is built of brick and decorated with marble.
» Construction began before the start of the American Civil War, and was suspended for the same reason.
» Design of the altar in the St. Patrick Cathedral was made by Tiffany. 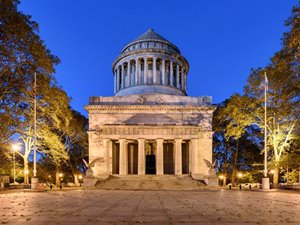 Facts:
» The Grant Tomb is the mausoleum of the American President Ulysses S. Grant.
» Ulysses S. Grant was a simple farmer, who led the group of volunteers at the beginning of the Civil War. He became the first General of the Army in the United States, and then the 18th president, who served two terms.
» It took 8,000 tons of granite to construct the mausoleum. Inside it’s decorated with mosaics depicting scenes of the Civil War.
» The antique mausoleum at Halicarnassus has inspired architects.
» Five years later, next to Grant Tomb was installed the tomb of his wife.

Plan your own tour over New York on the monuments map 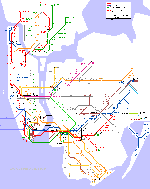 Search for architecture monuments of New York on the map

Tours through neighbours of New York