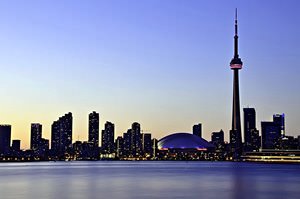 We continue on the collection of the most important architecture monuments of Toronto: CN Tower, Royal Ontario Museum, Canadas Wonderland, Roy Thomson Hall, Metropolitan United Church, St. Michaels Cathedral, and Rogers Centre. Perhaps, all of them also define the look of Canada in general. The 3D models of landmarks, presented in our Toronto flyover video, will help you to get a grasp on the true architectural and historical heritage of this place. We hope that photographs and historical facts will give you a better impression on each of these monuments. This information is also useful when making up your own excursion tour through Toronto. 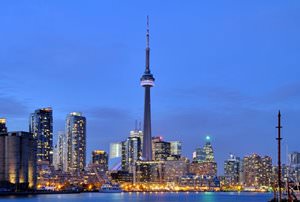 Facts:
» The CN Tower is a TV tower in Toronto built in 1975. With an antenna, it is 554 m high. It had been the highest tower in the world until 2007.
»  When it was designed, special demands on the safety of the construction were made. The TV tower can withstand an 8.5 magnitude earthquake and a wind speed of 420 km/h.
»  The main attraction of the tower is an observation platform at a height of 350 m. Its floor is glass and withstands a weight of 109 kg/cm2. Adrenaline junkies have an opportunity to walk along the ledge of the platform with protective equipment.
»  On the rotating platform, there is a restaurant that is famous for its rich wine list.
»  The platform makes a full turn within 1 hour 12 minutes. It has a breathtaking view of Toronto and its surroundings. If the weather is good, the visibility is 100 km. 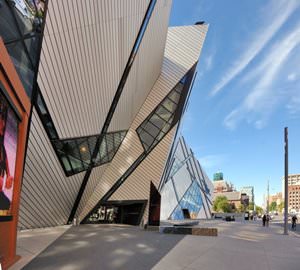 Facts:
» The Royal Ontario Museum was opened at school in 1857 and named the Museum of Natural History and Fine Arts. Then, it was under the management of the history department of the University of Toronto.
»  The museum became independent in 1968. It has become the biggest history, culture, natural science, and archeology museum in Canada. In its halls and warehouses, 6 million exhibits are kept.
»  In 2007, it was necessary to reconstruct the museum. The project was started by architect Daniel Libeskind who was famous for his paradoxical ideas.
»  The project had been developed for 7 years. Libeskind created a fantastic structure in the form of crystals.
»  Such a renovation has made the museum magnificent and let extend its territory by 18 600 m2. It has become the seventh architectural wonder of the world. 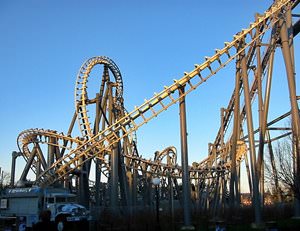 Facts:
» Canada's Wonderland is a theme amusement park that occupies 121 hectares. It is 30 km far from the central districts of Toronto.
»  The park is conditionally divided into 10 themed sectors. There are over 200 types of attractions, including 60 roller coasters. The highest one is 90 m.
»  There are also gift and ethnic shops and restaurants. Gymnasts make shows jumping on trampolines. Divers dive from a high springboard.
»  The 3-minute drive is very extreme. The construction of this machine cost $20 million. The attraction was opened in 2012. People sit in trolleys at a height of 230 ft and fall down at a right angle at a speed of 77 mph. They drive upside down. During such a “trip”, they rapidly go up and down, go in a double spiral, and do a loop. Finally, tourists can buy photos of themselves taken at culmination points.
»  In Canada’s Wonderland, there are a water park, a carting area, and a cinema. In the evenings, you can watch a laser show. There is even a children’s playground. The park is open from May to September. 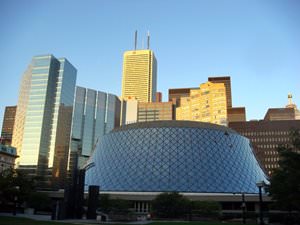 Facts:
» Roy Thomson Hall is the best concert hall in the country. The symphony orchestra of the city and Mendelssohn Choir rehearse here.
»  The concert hall was opened in 1982. The hall was named after Roy Thomson, a philanthropist who donated $4.5 million for the construction.
»  The building looks like a mirror casket and its extraordinary shape attracts tourists. In 1984, the concert hall was visited by English Queen Elizabeth II. When the “Big Seven” Summit was held in 1987, leaders of seven countries met exactly in Roy Thomson Hall.
»  When the building was constructed, concrete structures were used. Due to this, acoustics was not good. So, during the reconstruction in 2000-2002, the floor and walls were replaced by wooden ones and the scene was decorated with drapes.
»  In Roy Thomson Hall, there is also a big organ that includes 5 207 pipes.
»  In 2005, the hall appeared in the film “X-Men”. 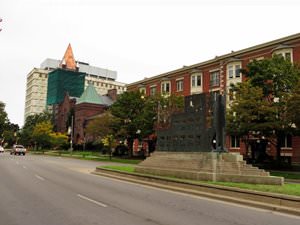 Facts:
» The landmark of Toronto is a high church. The Metropolitan United Church was built in the New Gothic style. It is distinguished by a frame vault.
»  The church is under the management of the Protestant Association. The Christian church received the status of a cathedral. Local services are held in a religious building.
»  The construction dates back to the late 19th century. The temple was built in 1870 in the central district of the city.
»  One of the important parts of the construction is a tower in the Gothic style. The bell tower is located above the central entrance of the church.
»  In the late 30s of the 20th century, the building was significantly damaged by fire. It was almost destroyed. Then, the church regained its original appearance and was consecrated.
»  Visitors are attracted by wonderful stained glass windows, big columns, and a luxurious interior. The floor is covered with colorful tiles.
»  At the church, there is a mechanical musical instrument. It is situated in the bell tower. It has 23 bronze bells that are hit in turn. The carillon is controlled with a keyboard.
»  In 1930, the biggest organ in Toronto was delivered to the church. It includes over 8 000 pipes, one of which is 10 m high. 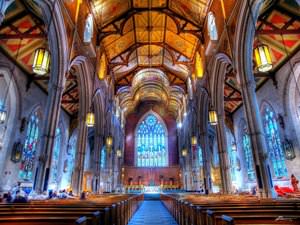 Facts:
» St. Michael’s Cathedral was built in the middle of the 19th century. The English New Gothic building was presented by architect William Thomas in 1865. Irish immigrants provided financial assistance.
»  Local craftsmen constructed a belfry and a spire already after Thomas’ death. These construction elements were declared as the symbols of Canadian Confederation.
»  The walls include the fragments of the stone pillar of the English Norman Church. In 1867, the cathedral was the highest building (83 m).
»  St. Michaels Cathedral was burnt twice. The brick masonry was damaged by climatic conditions.
»  In 2010, it was decided to replace destroyed fragments with modern materials. During the reconstruction, materials from British manufacturers were used. Sometimes only parts of bricks were built in the masonry. It had to tint them for the masonry to match the constructing materials of the 19th century. Special white bricks alternating with light yellow sandstone from Ohio make this religious building unique.
»  The Christian cathedral has been home to the Roman Catholic Archdiocese for a century and a half. 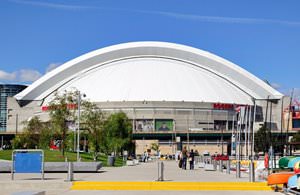 Facts:
» Rogers Centre is a sports stadium where not only sports competitions, but also entertainment events are held. There are also showrooms, conference halls, concert halls, a restaurant, and a hotel.
»  In 2000, 25 000 children and their parents in wizards’ clothes gathered together here to listen to J. K. Rowling reading extracts from “Harry Potter”.
»  The most unique element of Rogers Centre is a roof that is folded in and out depending on the weather. The weight of the domed roof is 11 000 tons. The roof can change its position within 20 minutes.
»  The center is home to the Toronto Argonauts (CFL) and the Toronto Blue Jays (MLB). In 1994, matches of the Basketball World Cup were held here.
»  Also, Rogers Centre annually hosts motor shows.

This guide to architecture monuments in Toronto is protected by the copyright law. You can re-publish this content with mandatory attribution: direct and active hyperlink to www.orangesmile.com.
Toronto - guide chapters 1 2 3 4 5 6 7 8

Plan your own tour over Toronto on the monuments map

Search for architecture monuments of Toronto on the map

Tours through neighbours of Toronto

Montreal
The Cathedral of Marie-Reine-du-Monde is a cathedral in Montreal that was built in the late 19th century. The cathedral impresses with its beauty and luxury interior. The free entrance and daily services attract a lot of tourists. Visitors of the cathedral are especially interested in beautiful statues of saint patrons of the city that decorate the facade. High Gothic belfries of the cathedral are architectural attractions of the city. ... Open »
Philadelphia
The city administration holds its meetings in a special building – Philadelphia City Hall. It’s a 167-meter building with a dome crowned by an 11-meter statue of the founding father William Penn. It weighs 27 tons. The statue faces the south. Thus it is lit by sunshine during most of the day. The bronze figure is empty inside. There’s a passage inside leading to the top of the hat that you can get to through a hatch. The city hall ... Open »
New York
The Statue of Liberty is located on Liberty Island and is one of the most famous sculptures in the USA and in the world as well. The Statue of Liberty is often called the symbol of New York City and the United States, the symbol of freedom and democracy, and the Liberty Lady. That was a gift of the French on the centenary of the American Revolution. The goddess of freedom holds a torch and a tablet and stands with one foot on the broken chains. ... Open »
Chicago
The Museum of Science and Industry was opened in 1933 on the initiative of D. Rosenwald, a rich businessman and fan of scientific and technological progress. The museum is a very interesting modern complex that attracts a lot of visitors. There are 75 halls that house 35 000 exhibits. The most attractive thing here is that visitors can touch any exhibits and even take part in phenomena and processes. In the museum, permanent and temporary ... Open »
Boston
The First Church of Christ was built in 1894. It is not just a single building but a complex. Here, the teaching of God and norms of behavior are preached. The initiator of the construction of Boston Church was Mary Baker Eddy. She was cured of the disease after she had turned to God with daily prayers. The first congregation was established in 1879. Today, there are 2 000 branches in many countries. At the Christian Science Church, ... Open »
OrangeSmile.com - online travel reservation expert providing reliable car rental and hotel booking services. We feature more than 25.000 destinations with 12.000 rental offices and 200.000 hotels worldwide.
Secure Server