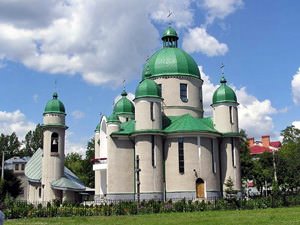 Lviv City Hall, Latin Cathedral, St. George Cathedral, and Dormition Church are the architectural landmarks, the names of which always remind you the words 'Lviv' and 'Ukraine'. And this is natural, since these prominent landmarks are the ones that shape the historical and architectural look of Lviv. Let’s look at these landmarks from high above, namely, from a bird’s eye view – click the video and make a flight over the architectural ensemble of Lviv. In the main article, you can also read the most interesting facts about every famous landmark of Lviv. 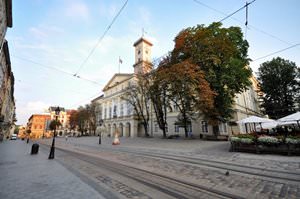 Facts:
» The city council is headquartered in the building located on Market Square.
»  The first administrative building appeared in Lviv in 1357, when it obtained the right to self-governance. Demonstrative executions used to be held here.
»  The wooden building burned down completely in the fire that broke out 25 years later.
»  In 1826, the town hall collapsed. 8 people were trapped in the rubble.
»  Then it was decided to erect a new building made of stone.
»  The present-day four-storey tower was built in 1835. It was faced with brickwork. The town hall had its own courtyard.
»  The construction was damaged by shellfire during the revolutions of 1848. The roof had to be replaced with a jagged covering, similar to ones present in medieval castles.
»  A clock was mounted on the tower. It still tells the exact time, and plays the anthem in the morning.
»  Before the main entrance, there are sculptures of lions. The animals hold a heraldic shield and the emblem of the settlement in their paws.
»  Guided tours are held both inside and outside the building.
»  Having climbed 408 steps, a tourist will find themselves on the observation deck of the 65-metre tower.
»  A blue-yellow flag that appeared in 1919 crowns the spire. 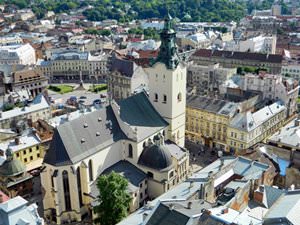 Facts:
» The stone structure with an elongated ledge belongs to the Latin Cathedral.
»  The interior is spacious – 67x23 metres. The building resembles a cube from the outside. Several chapels were later built around the architectural figure.
»  Until the middle of the 18th century, family vaults were located in the crypt. Memorial inscriptions have the information about the people buried here. Some tombs have sculptures as a token of sorrow.
»  Inside, the openings are supported by numerous columns. The vault and wall panels are rich in frescoes with scenes from church life and the formation of the urban settlement, which lasted for over 700 years. The altar is framed by marble sculptures of saints.
»  In 1360, the house of God started to be built on the site of the former Orthodox Church. The work lasted for over a hundred years.
»  In 1672, the Turkish attack on the city was repulsed. The cores of cannons hung on the cathedral walls serve as a reminder of those times.
»  When Austria occupied Galicia in 1772, indignant citizens barricaded the main entrance. The mured arched passageways can still be seen.
»  The spire on the tower ends with a cross that was covered with gold leaf in 1844. 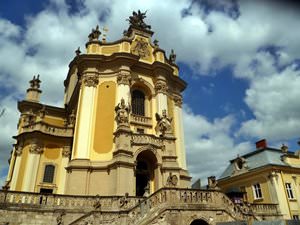 Facts:
» The St. George’s Archcathedral was completed in 1770.
»  The first wooden building was burnt by the king of Poland. However, the bell made in 1341 managed to survive.
»  After that, it was decided to erect a stone construction. It was designed by an Austrian architect. The building had been decorated for several decades.
»  First it was owned by the Basilian community. In 1816, it became the residence of a Greek Catholic senior priest. Then the temple belonged to the Russian Orthodox Church, but eventually turned into a Ukrainian Catholic cathedral in 1990.
»  To access the cathedral, you need to go through the entrance gate. The doors are decorated with symbolic images.
»  There are steps leading to the entrance. Above the door, there is a balcony with a decorative wall. A statue of St. George on a horse rises on the roof.
»  The St. George’s Cathedral has a worship copy of the Turin Shroud. According to legend, the body of Jesus was wrapped in the shroud after his demise.
»  The church holds regular services. The altar is adorned with faces of the righteous.
»  On behalf of the emperor of Austria, the Ukrainian artist Luka Dolinsky (18th century) was presented with a golden ring for his masterpieces. 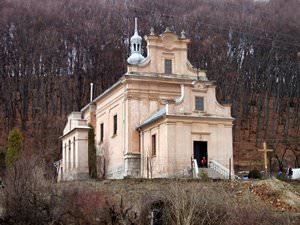 Facts:
» The complex consisting of a church, a bell tower, a chapel, and a tower is a representative of Renaissance architecture.
»  There used to be buildings on this place, but they were either destroyed by fire or fell into disrepair.
»  The Dormition Church dates back to 1591. It took about 40 years to build it.
»  The Church of the Assumption consists of three white stone structures: the main area, an altar, and an annex in front of the entrance. All parts are situated at the same level.
»  The temple is crowned with three domes with lamps.
»  The central base is supported by four columns.
»  The interior decoration is full of frescoes.
»  There are several rows of icons on the altar partition. They are over three hundred years old.
»  The ceiling has socket-shaped recesses. The eaves of the vault are decorated with stone carving.
»  The chapel is named for the Three Hierarchs. It was built in 1590. The bell tower (1578) is named after Konstantin Korniakt, the Greek industrialist who donated money for its construction. The 66-metre tower has four tiers.
»  In 1779, the bell was struck by lightning, which caused its deformation. The molten item was removed. A new one appeared four years later. Its ringing can still be heard. 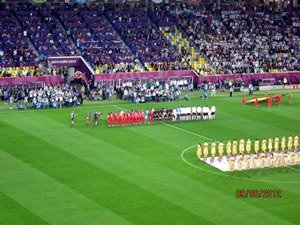 Facts:
» The modern football stadium was opened in 2011. The construction cost 2 billion.
»  Architects from Vienna and Lviv worked on the project.
»  The stadium is owned by the state company managing sports arenas.
»  Over 34,000 fans can simultaneously watch sports events. 425 seats in the VIP box are intended for honored visitors. There is also a bar for 400 people in a separate area.
»  The Lviv team trains and prepares for matches on the field.
»  The size of the playing field is close to the generally accepted standard: 105x68 metres. The ground is covered with natural grass lawn.
»  Initially it was suggested to name the stadium Lemberg – the German version of ‘Lviv’. However, the suggestion wasn’t approved.
»  The four-storey stadium building consists of the following levels: a 6,000-square-metre underground parking lot that can accommodate 1,593 cars; two-tier stands, guest sectors, other administrative rooms.
»  The arena is equipped with two TV screens placed opposite each other. The stands are covered with a transparent dome.
»  The well-developed infrastructure allows people with disabilities to get to the necessary place easily.

Facts: » The Armenian Cathedral is over six hundred years old.
»  The hall is still being decorated.
»  Once the Lviv settlement was formed, Armenian craftsmen and merchants started to come here at the invitation of the city founder. The members of the Armenian diaspora soon became an influential community. As a result, they built the Cathedral of the Assumption of the Blessed Virgin Mary.
»  In 1676, the building was seriously damaged by fire. It took almost a century to recover it. A statue of St. Christopher meant to protect the shrine was also installed then.
»  After the house of God was closed in the Soviet era, the building was used for different purposes: there used to be an art gallery and a museum. Only in 2000, the building was returned to its real owners.
»  The church itself is located in the middle of interconnected courtyards.
»  The inside part of the dome represents the wonders of mosaic art. Some mosaic tiles form portraits of famous citizens, while others create a national ornament.
»  The walls of the cathedral are made of stone blocks. They are 1.4 m thick. There are gravestones built into the brickwork. Stained glass windows depict scenes from the apostles’ lives.

CONTINUE - PART II »»
This guide to architectural sightseeing in Lviv is protected by the copyright law. You can re-publish this content with mandatory attribution: direct and active hyperlink to www.orangesmile.com.
Lviv - guide chapters 1 2 3 4 5 6 7 8 9 10 11

Build your walking routes in Lviv on the landmark map

Architectural landmarks in the regions around Lviv