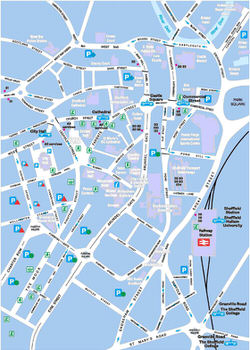 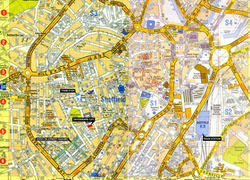 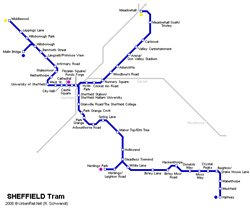 Interactive maps of hiking and biking routes around Sheffield

1. You can zoom in/out using your mouse wheel, as well as move the map of Sheffield with your mouse.
2. This interactive map presents two modes: 'Biking Routes' and 'Hiking Routes'. Use the '+' button on the map to switch between them.

This Sheffield map has two modes: 'Railway Network' and 'Landscape & Rural Map'. Use the '+' button on the map to navigate.

Our guide to Sheffield

Each street of the city keeps the memory of most important events in its history. Here you will find the ruins of the castle built in the XIII century. This place was a prison of Mary Queen of Scots in 1571-1583. The castle, which has belonged to the Duke of Norfolk, is also a truly interesting place. The local Museum of Antiquities is a source of great pride for residents of this place. Here you will find a … Open

The Central Cemetery of Sheffield is important too. In addition to burial sites of prominent personalities, this unique complex includes a beautiful garden, ancient catacombs, religious buildings, and many other interesting constructions. Among other facilities, it’s recommended to visit the Manor House. It is one of the most beautiful buildings of the town; a lot of interesting stories and legends are … Open

Sheffield features a huge number of beautiful parks and gardens that are ideal for hiking and sports. Sheffield Winter Garden remains one of the most popular tourist destinations; it is nicely decorated and points out because of an abundance of exotic plants brought from different parts of the world. Another beautiful collection can be found at the Botanical Garden; you can see beautiful floral arrangements, … Open

There is also an interesting holiday destination for fans of Indian cuisine in Sheffield. Viraaj specializes in this culinary tradition. King prawns and fish curry are the most popular dishes; adherents of the vegetarian diet also admire this restaurant. Best pasta and pizza are offered by the Italian restaurant Vito's Italian. Simple and stylish, it is perfect for a great company. Budget travelers are sure to be … Open

Traditions and mentality of Sheffield

‘Steel City’ is an informal name given to Sheffield back in the Middle Ages; however, it is still relevant. The convenient location of the city contributed to the rapid development of blacksmiths; there were deposits of coal and iron ore in Sheffield and the surrounding area. According to historical records, the first blacksmith in the town was founded in the 13th century; during the Middle Ages, smithies … Open

As for the outstanding architectural monuments of Sheffield, the City Hall built in 1932 is worth being mentioned. It is a vivid example of the neoclassical architecture. The building entrance is decorated with high columns. In the period of the Second World War, the bomb exploded near the City Hall. It is a miracle that the building wasn’t severely damaged. The signs of the explosion are left on the … Open