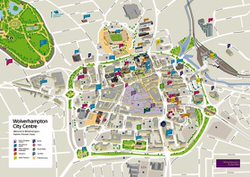 Interactive maps of hiking and biking routes around Wolverhampton

1. You can zoom in/out using your mouse wheel, as well as move the map of Wolverhampton with your mouse.
2. This interactive map presents two modes: 'Biking Routes' and 'Hiking Routes'. Use the '+' button on the map to switch between them.

This Wolverhampton map has two modes: 'Railway Network' and 'Landscape & Rural Map'. Use the '+' button on the map to navigate.

Our guide to Wolverhampton

Hotels with history of Wolverhampton

The atmosphere of the Barons Court Hotel resembles that of an interesting historical museum. Everywhere in this mini-hotel, you can see beautiful antique furniture (many of whose elements were handmade), unique paintings and figurines, old utensils and housewares, as well as a host of other antique attributes. The hotel is housed in a unique Edwardian-style building, which has been preserved virtually unchanged … Open

8. It is very convenient to travel around the city by public transport. Buses run around the city from early morning to late evening. A taxi can also be easily caught on any street. Difficulties can arise only during peak hours when there are no free cubs. 9. Three-pin sockets are installed in all hotels, the voltage is 240 V. To use electrical appliances, special adapters and adapters may be needed. 7. It … Open

Those who want to witness real British horse racing come to Wolverhampton Racecourse. Monmore Green Stadium and Molineux Stadium are perfect for fans of sports, while Light House Media Center, Cineworld Cinema can please cinema buffs. Those who prefer cultural performances to all events will surely appreciate local theaters. These are Grand Theatre, Arena Theatre, and Wolverhampton Civic Hall. Another interesting … Open

Festivals and events in Wolverhampton

Another interesting gastronomic festival takes place in early July, and its name is very simple - Wolverhampton Festival of Food & Drink. The open-air event is held on Wulfruna Street. This is the time when a food fair opens, visitors are offered a rich entertainment program with music, dancing, mass festivities, and theatrical performances so that no one is left either hungry or unhappy. And it must be said that … Open

Lovers of modern style and romantic natures will definitely like the Holiday Inn Garden Court Wolverhampton hotel. Its spacious rooms with sky blue walls have very beautiful carpets and elegant light wood furniture. Designer chandeliers and many miniature bright lamps illuminate the rooms, and one of the main decorations is beautiful still-life paintings. Some elements of interior design are made in the style of … Open

Wolverhampton for children - what to visit

The most beautiful park in the city, which is sure to please fans of excursions, is David Austin Roses. Its main decoration in the warm season is roses. Besides roses, many other beautiful flowers and ornamental plants are grown here. The park has excellent settings for walking tours. Children will love to watch the butterflies fluttering all over the place, as well as the peacocks strolling through the park. The … Open