Preparing your trip to Houston: advices & hints - things to do and to obey 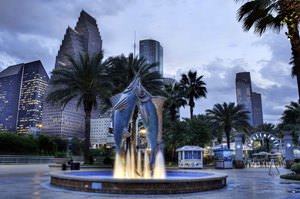 1.Tourists who plan to bring electrical appliances have to consider that the mains voltage is 110 V. Some devices may require special adapters and connectors, which are usually provided on-demand in large hotels.
2. Tipping is accepted; tip is left literally everywhere. Be sure to leave small cash reward to waiters, hairdressers and taxi drivers; 10-15% of the total bill will be optimal.
3. Those who expect to dedicate a lot of time to shopping trips have to remember that commercial establishments have a strict schedule here. Major shopping centers usually open no earlier than 9:30 am and serve visitors until late in the evening. Small shops usually open earlier, but they serve visitors only to 6:00 - 7:00 pm.
4. The city has excellent public transport links. The fare in the bus is paid to a driver; foreigners are advised to stock up on plenty of small-denomination coins. The fact is that asking for change in public transport is not accepted.
5. Popular mode of transport is taxi, which can be called by phone or stopped on the street. Travelling by taxi is especially beneficial to those who dwell on the rest as a great company. Copyright www.orangesmile.com
6. Foreign guests would need an international driver's license and a credit card used for depositing to rent a car. Some car rental companies may deny service to those under 21 years, while others require renters to be at least 25 years old.
7. Despite the ubiquity of mobile communications, street phone booths are still relevant and popular in Houston. They represent the best way to make long-distance and international calls. The majority of street phones accept special cards.
Cultural vacation in Houston - fantastic architecture and monuments
Museum of Natural Science, St. Paul Church, Houston City Hall, Heritage Plaza, University of Hyyuston-Downtown, as well as many others, they all become the world's cultural heritage objects and remain as iconic monuments for Houston …

Open
8. In Houston, as well as in other cities of the United States, there is a very strict attitude towards sales of alcoholic beverages and tobacco products. You can buy them only in specialized retail pavilions and only within a period of time declared in local rules.
9. For the above reasons young travelers who expect to attend prestigious restaurants and nightclubs are recommended to have an identity document. Don’t be surprised, if they would ask you to show your passport in a restaurant or night club. Persons under the age of majority mayn’t be allowed to visit some night clubs; they won’t be able to order alcoholic beverages at restaurants and bars.

Preparing your trip to Houston: advices & hints - things to do and to obey You can re-publish this content with mandatory attribution: direct and active hyperlink to www.orangesmile.com.
Houston - guide chapters 1 2 3 4 5 6 7 8

Tips for the cities around Houston

Dallas
2. Tourists who expect to rent a car should keep in mind that there are always big traffic jams during the "rush hour" in the central streets of Dallas. In the morning the main stream of cars moves in direction of the center, and in the evening - from the center. 3. Spring is considered a rainy season. During this time of year excursion program can be disturbed by ... Open »
Texas
2. Drivers are strongly recommended to obey traffic rules, as there is a very strict control. Be sure to take care of the fuel while driving, as in some areas of the state gas stations are rare. 3. The mild and warm climate is typical for Texas; in summer, air temperature is usually around +30°C. Winter frost is rare, and in some districts the air is about +15°C. Sudden ... Open »
New Orleans
2. Tourists limited in time and desiring to observe the most significant landmarks should take a trip on local tram. Its route runs through the central streets of the city thus passing all the landmarks and sight. The cost of the trip will be about 1.3 USD. 3. The optimum means of city transport apart from the tram is a bus. During the weekdays it runs through the city almost ... Open »
Oklahoma City
2. Usual utility supplied voltage in hotels is 110V. All the hotels and inns are equipped with American standard size sockets. Before a trip one should check all the electrical appliances for compatibility and get necessary connectors and adapters. 3. One of the problems faced by many foreign tourists visiting Oklahoma-City is lack of public toilets. In case of urgent ... Open »
Monterrey
2. Boutiques and shopping centers start operating not later than at 10 a.m. and continue their work till 7-8 p.m. Large shopping centers may stay open till 10 p.m. Usual day off is considered to be Sunday. 3. The tips in the restaurant make up to 10% of the total order amount. In the upscale restaurants the tips can be counted in the total sum of the order, but in this ... Open »
Memphis
2. The system of public transport is presented with a branched bus and trams net. A cost of a trip in public transport will be about 1 – 1.5 dollars. Public transport is convenient for traveling only during weekdays as during weekends buses are rather rare and the route can be changed. 3. The most favorable season for visiting Memphis is considered to be autumn as it ... Open »

Travelling to Houston - advices and tips. What should be provisioned in advance, the rules you might want to follow, and the things you better avoid doing in Houston. We help you to make your trip smooth and easy, with no unexpected surprises.