«« BEGINNING - PART I
Video of flights over top monuments of Edinburgh in HD format.
Use 'Full Screen' mode.
Any guide of Edinburgh would be incomplete without a review of its most impressive architecture monuments - Palace of Holyroodhouse, Scott Monument, St. Mary Cathedral, National Gallery of Scotland, Nelson Monument and many others. It’s difficult to overestimate their historical and cultural importance for Great Britain. The style and architecture of any of these landmarks are worth a visit when you are on vacation in Edinburgh. However, you can virtually visit any of these wonderful monuments without leaving your comfortable chair. For that purpose, simply 'fly' over the 3D model of Edinburgh that was created by OrangeSmile and GoogleEarth. All you need to do is to click the video on this page. 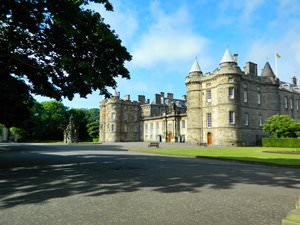 Facts:
» The Palace of Holyroodhouse is the official residence of the British monarch in Scotland.
» In the absence of the royal family the palace is open to public access.
» You can enter the palace through the grand staircase of the 17th century constructed in Baroque style. Ornate molding on the ceiling depicts angels keeping Scottish regalia.
» The grand staircase opens to the richly decorated dining room and the Royal Throne Hall, where George IV was crowned.
» The most impressive are the private rooms of Mary Queen of Scots, which contain a variety of antiques, valuable paintings and tapestries.
» The gallery of the castle houses portraits of 110 Scottish monarchs. The gallery also has exhibits of works of art from the private collection of the royal family. 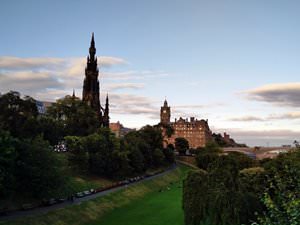 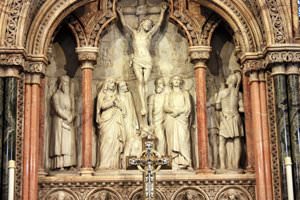 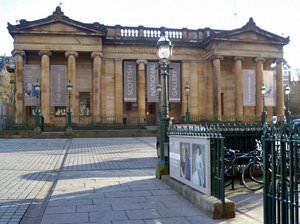 Facts:
» The National Gallery of Scotland is the oldest art gallery of the country, founded in 1859.
» The National Gallery is set in the downtown building designed by the famous Scottish architect William Henry Playfair.
» The gallery houses Scottish folk art collection, as well as a rich collection of European painting and sculpture from the Renaissance to the early 20th century.
» The gallery represents works of great masters such as Rubens, Titian, Van Dyck, Rembrandt, Watteau, Gainsborough, Monet, Gauguin, Pissarro, Scotsman William Aikman and other great artists. 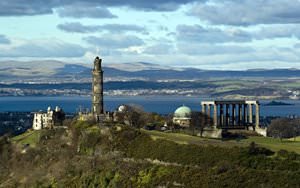 Facts:
» The Nelson Monument was erected in memory of the famous Vice-Admiral Horatio Nelson, who died at the Battle of Trafalgar in 1805.
» Since the opening, the monument was accessible to visitors, and in 1853 it began to serve as the signal mast for ships.
» The 32 -meter tower is equipped with an observation deck offering stunning panoramic views of Edinburgh. You have to overcome 143 steps to get to the observation deck.
» An important role in the popularity of the monument is played by its original appearance, which resembles an inverted telescope mounted with the time ball on its top.
» The time ball is the mechanical device weighing 762 kg, which helped sailors to verify chronometers. The ball functions even these days; every day it’s raised to the mast at about 12:55am and dropped down exactly at 1:00pm after gunfire from Edinburgh Castle. 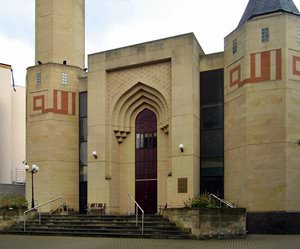 Facts:
» The Edinburgh Central Mosque is the main mosque in Edinburgh.
» Construction of the mosque took more than six years.
» The mosque can accommodate in its main hall more than one thousand people at the same time.
» The mosque has a large library and a kitchen.
» Interestingly, there were serious problems of funding the construction, which, however, have been resolved, when Saudi Arabia's King Fahd bin Abdul Aziz al-Saud donated 90% of the total project cost.

This guide to architecture monuments in Edinburgh is protected by the copyright law. You can re-publish this content with mandatory attribution: direct and active hyperlink to www.orangesmile.com.
Edinburgh - guide chapters 1 2 3 4 5 6 7 8 9 10 11 12 13 14 15 16 17

Plan your own tour over Edinburgh on the monuments map 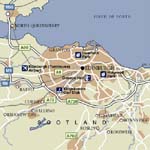 Search for architecture monuments of Edinburgh on the map

Tours through neighbours of Edinburgh

Glasgow
The university was founded in 1451. The educational institution includes research centers and has partners from all over the world. Glasgow University is the first university in the country that has had computers since 1975. There are 5 800 teachers educating 23 000 students at 9 faculties. The teaching staff has developed educational programs for all levels. The university is proud of 7 laureates of the prestigious international award. The ... Open »
Manchester
Manchester Town Hall is one of the main attractions in Manchester. It was decided to construct a new town hall in 1863 because the old one did not suit the developing town. The famous architect Alfred Waterhouse built a building in 1877 in the New Gothic style. There are almost no decorative elements on its facade. An 85-meter tower with a clock and 23 bells rises above the Town Hall. Although it looks like an old construction, it has all ... Open »
Liverpool
At the beginning of the last century, the London company decided to enlarge the space for 6 thousand workers. The construction lasted three years. The opening ceremony took place in 1911. It was visited by a famous politician and nobleman Edward Stanley. In 60 years, the building was restored completely and its offices were equipped with modern appliances. When the 100th anniversary of the building was celebrated, the 3D laser show was ... Open »
Dublin
The Christ Church Cathedral is the main cathedral of Dublin situated in the historic part of the city. That’s one of three ancient cathedrals. The temple was founded in 1031 by the Viking king Sitrig Silkenberd for the first archbishop of Dublin Donat. In 1487 the coronation of Lambert Simnel as King Edward VI was held there; once he unsuccessfully tried to overthrow the King of England. The cathedral crypt is the oldest structure in ... Open »
Cardiff
The City Hall, a 60-meter clock tower, is one of the administrative institutions included in the single complex. The square dome is covered with gilded disks. There is an intimidating dragon on the roof. The exterior facade is faced with white stone and limestone. There is a rectangular pool in front of the City Hall. The fountain complex was founded when one nobleman received the title of the Prince of Wales. At the first level, ... Open »
OrangeSmile.com - online travel reservation expert providing reliable car rental and hotel booking services. We feature more than 25.000 destinations with 12.000 rental offices and 200.000 hotels worldwide.
Secure Server