«« BEGINNING - PART I
Video of flights over top monuments of Dublin in HD format.
Use 'Full Screen' mode.
Let’s move further. The upcoming famous architecture monuments of Dublin that deserve to be mentioned are Christ Church Cathedral, President Residence, Dublin Castle, National Library of Ireland, and National Botanic Gardens. An overview of interesting facts and a collection of photographs are available for each monument. In order to plan a route for your real-life sightseeing tour in Dublin, use our interactive map of sights in of Dublin that is available below this article. 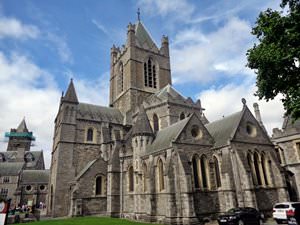 Facts:
» The Christ Church Cathedral is the main cathedral of Dublin situated in the historic part of the city.
» That’s one of three ancient cathedrals.
» The temple was founded in 1031 by the Viking king Sitrig Silkenberd for the first archbishop of Dublin Donat.
» In 1487 the coronation of Lambert Simnel as King Edward VI was held there; once he unsuccessfully tried to overthrow the King of England.
» The cathedral crypt is the oldest structure in Dublin. It contains treasures of the Christ Church, manuscripts, tabernacle, candlesticks and other artifacts.
» The vast crypt under the cathedral houses works of art on par with a mummified rat and cat that chased it found in the organ in 1860. 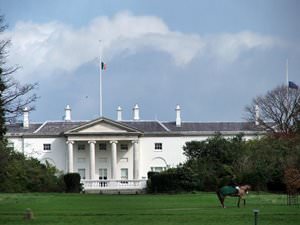 Facts:
» The President Residence was designed by Irish politician and financier Nathaniel Clements, who served as superintendent of the Phoenix Park in Dublin. Construction of the mansion began in 1751.
» The house was empty before adoption of the Constitution of Ireland in 1937, which introduced the post of president of the country. In 1938 it was settled by the first President of Ireland, Douglas Hyde, who planned to demolish the building and replace it with a new presidential palace, but this plan wasn’t implemented due to the outbreak of World War II.
» By 1945, the President of Ireland has become so identified with this building, that it was decided to keep the house, despite its heavy wear and tear. Since then, restoration work is carried out in the mansion from time to time.
» The interior of the building is not as luxurious as in many other European royal and presidential palaces, but at the same time, the mansion is a relatively comfortable residence for the head of state.
» The mansion has the reception hall, large and small dining rooms, the President's Office, the library, the large hall and a presidential corridor along which the busts of the Presidents of Ireland, as well as several bedrooms decorated in the style of the eighteenth and nineteenth centuries are seen. 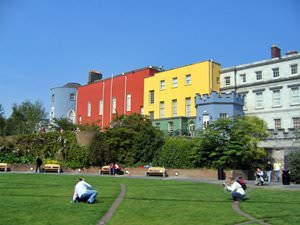 Facts:
» The Dublin Castle is the main government complex of buildings in Dublin; it was the main outpost of the British in Ireland in past.
» Created initially as a fortification of the city, the castle has been used for various purposes throughout its history. It was the residence of the king; the castle housed the Parliament and the courts.
» Since 1922 the Dublin Castle served as a court complex for 10 years, and in 1930 it was decided to hold there the inauguration of the President of Ireland.
» In 1938, the castle housed the residence of the first President of Ireland, Douglas Hyde.
» Currently, the castle holds routs of foreign heads of state, as well as foreign delegations and banquets on national holidays; dungeons of the castle are used for concerts.
» The Dublin Castle is open to the public, except cases of public ceremonies. 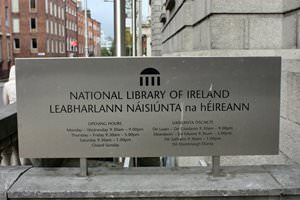 Facts:
» The National Library of Ireland is the largest public library in the country.
» The library was founded in 1877.
» The library organizes collection, storage and promotion of documents about the history of Ireland.
» It houses more than 500 thousand volumes, including books, maps, manuscripts, newspapers, magazines and photographs.
» The library regularly hosts art exhibitions and different social and cultural events. 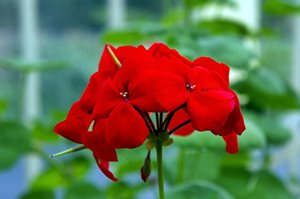 This guide to architecture monuments in Dublin is protected by the copyright law. You can re-publish this content with mandatory attribution: direct and active hyperlink to www.orangesmile.com.
Dublin - guide chapters 1 2 3 4 5 6 7 8 9 10 11

Plan your own tour over Dublin on the monuments map

Search for architecture monuments of Dublin on the map

Tours through neighbours of Dublin

Liverpool
At the beginning of the last century, the London company decided to enlarge the space for 6 thousand workers. The construction lasted three years. The opening ceremony took place in 1911. It was visited by a famous politician and nobleman Edward Stanley. In 60 years, the building was restored completely and its offices were equipped with modern appliances. When the 100th anniversary of the building was celebrated, the 3D laser show was ... Open »
Manchester
Manchester Town Hall is one of the main attractions in Manchester. It was decided to construct a new town hall in 1863 because the old one did not suit the developing town. The famous architect Alfred Waterhouse built a building in 1877 in the New Gothic style. There are almost no decorative elements on its facade. An 85-meter tower with a clock and 23 bells rises above the Town Hall. Although it looks like an old construction, it has all ... Open »
Cardiff
The City Hall, a 60-meter clock tower, is one of the administrative institutions included in the single complex. The square dome is covered with gilded disks. There is an intimidating dragon on the roof. The exterior facade is faced with white stone and limestone. There is a rectangular pool in front of the City Hall. The fountain complex was founded when one nobleman received the title of the Prince of Wales. At the first level, ... Open »
Glasgow
The university was founded in 1451. The educational institution includes research centers and has partners from all over the world. Glasgow University is the first university in the country that has had computers since 1975. There are 5 800 teachers educating 23 000 students at 9 faculties. The teaching staff has developed educational programs for all levels. The university is proud of 7 laureates of the prestigious international award. The ... Open »
Edinburgh
The Edinburgh Castle is the ancient fortress in the center of Edinburgh, which is the most important and attractive tourist attraction of the Scottish capital. The castle was built on the rock that was once an active volcano. The castle has been built in the early Middle Ages and was rebuilt several times. In the end, it was adapted for the defense of land from artillery. Three sides of the fortress are protected by steep cliffs, so access to ... Open »
OrangeSmile.com - online travel reservation expert providing reliable car rental and hotel booking services. We feature more than 25.000 destinations with 12.000 rental offices and 200.000 hotels worldwide.
Secure Server