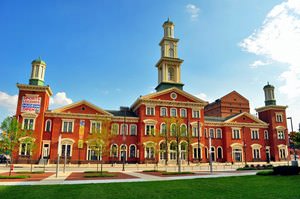 Baltimore is a major port city which was founded in 1729. The city and its residents carefully cherish the historical monuments of the past, so Baltimore never ceases to attract travelers who come there to see unforgettable and unique attractions. If you like long unhurried walks, you will be surely interested in the central part of the city, which is also the location of numerous shopping and entertainment complexes, restaurants and most popular sightseeing facilities. Start your observation of the city from visiting remarkable Inner Harbor and then move your feet to another amazing place of interest - the National Aquarium. This is the place where you can see the inhabitants of deep sea. The visitors of the aquarium can not only see rare species of marine animals, but also watch how divers feed the flocks of colorful fish.
Guide to Baltimore sightseeing - things to see and to visit
Baltimore is one of the most popular cities for tourists in Maryland State. It was founded in 1729 and for many years Baltimore was the main port city of the US. Nowadays this is one of the …

Open
The main street of the harbor is the location of a large number of various museums, souvenir shops and entertainment centers. Here visitors are also recommended to visit the famous Maryland Science Center. Travellers with children should definitely not forget to attend Port Discovery Children Museum. Even a usual walk on the harbor’s piers will surely turn into a fascinating tour. You will see numerous moored boats and sailboats near the harbor and even an old submarine made during the World War II period.
Just like in any other city of the US, the residents of Baltimore are very fond of baseball. The most famous stadium of the city is Oriole Park. It is also located in the central district of Baltimore. Football fans will surely fall in love with M&MT Bank Stadium. The Basilica of Baltimore is known as the best-known religious landmark of the city. This beautiful old building simply strikes its visitors by unforgettable graceful forms and incomparable design of inner halls. A monument dedicated to Washington should be definitely mentioned among other notable places of interest of the central area of Baltimore. Travellers may also like Power Plant Live entertainment center. This huge building notable of its unusual shape is a real tourist attraction and a true example of modern architecture. Copyright www.orangesmile.com
Family holidays with kids in Baltimore. How to entertain your child, things to show to children.
Baltimore is famous for its casinos and museums. Suitable places for relaxation can also be found for travelers with children. They should definitely look into the National Aquarium, which …

Open
The Italian quarter of the city called Little Italy can be found near the harbor. The district is known as one of the most comfortable and scenic parts of the city. Of course, Little Italy is home to numerous Italian restaurants, interesting shops, and spacious parks. The Italian district will also become a perfect choice for those tourists, who enjoy walking. Fells Point district is located east to the downtown. In addition numerous quality restaurants and bars, this district is widely famous for its wonderful art galleries. Here visitors of these cultural institutions are welcome to see the works of best contemporary artists. By the way, you are free to purchase a painting or a sculpture you like. 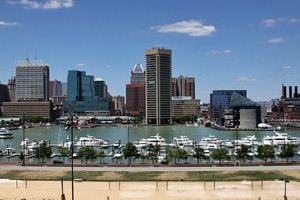 One thing you would not expect to see in Baltimore is a pagoda. Surprisingly, you will find one here and it is located in Patterson Park. The pagoda is not only a wonderful attraction, but also an excellent observation platform as well. Having climbed to the very top, you will certainly have no regrets about the effort spent. The only nuance is that the pagoda works only on Sundays. You will find it fascinating to visit the Seven Foot Knoll Lighthouse. It is remarkable for its history, which begins in 1855, when the lighthouse was built. The lighthouse spent most of its “life” in the Chesapeake Bay, and when it was replaced, it was moved to Inner Harbor. This is the very first lighthouse in all of Maryland. You will be glad to know that entrance into the premises is free of charge.
Cuisine of Baltimore for gourmet with top restaurants and cafe
Despite the fact that many people think of fast food when they hear the term “American cuisine”, the national culinary traditions are quite interesting. In Baltimore tourists are welcome …

Open
Baltimore is full of fortifications, as the Charm City (as Baltimore is called) played an important role in the formation of American statehood and in military operations. To begin with, Fort McHenry National Monument and Historical Shrine is the place where the US national anthem was born. The fort was built in 1798, and already in 1812 managed to become the defender of the city. It “participated” in other battles; both in the First and Second World Wars. Exhibits of the open-air museum include cannons, storage facilities, and household items. Also in the museum are held performances that will take you back to the era of the War of 1812 in the United States. 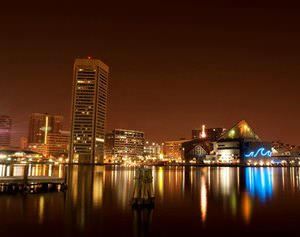 Star-Spangled Banner Flag House is a place that Americans themselves visit in order to penetrate patriotism. The fact is that it was here that another symbol of statehood was stitched, talking about the flag of the United States (the one that was first flown over Fort McHenry). The house-museum stores antique items, furniture, as well as artifacts associated with the war of 1812. Phoenix Shot Tower is another historical place you should go see. It was built in 1828 and until 1846, was the tallest building in the entire state, giving way to the honorable Trinity Church in New York. While in Baltimore, you should seize the opportunity to visit another place – Washington Monument and Mount Vernon. This is the first monument put up to George Washington in the whole of the USA.
Authentic traditions, festivals and lifestyle of Baltimore inhabitants
Every year for over thirty years, in the American city of Baltimore, local people enjoy the competition of the so-called kinetic sculptures that move on the water and flat surface, …

Open
Among the religious monuments, the Cathedral of Mary Our Queen stands out. It was built in 1959, with its main feature being monumentality. Of interest is the crypt of the cathedral, where church preachers are buried. Saint Alphonsus Church was built in 1842, and is apparently a rather inconspicuous small church. However, everything changes as soon as you go inside – such a magnificence of interesting objects inside! It is just like an embarrassment of riches.

In the section below, you can get one of our excursion, activities or city discovery tours over Baltimore and surroundings. Our website offers 10-30% lower ticket prices, when compared to the offline purchase on the spot.

This guide to cultural sights Baltimore is protected by the copyright law. You can re-publish this content with mandatory attribution: direct and active hyperlink to www.orangesmile.com.
Baltimore - guide chapters 1 2 3 4 5 6 7 8 9
Reference information
Map of all art museums

Art galleries in Baltimore and around
♥   Art museum 'Walters Art Museum' Baltimore, 0.8 km from the center. On the map

♥   Art museum 'Baltimore Museum of Art' Baltimore, 4 km from the center. On the map

Cathedrals and basilicas near Baltimore
♥   Former St. Peter the Apostle Church, Baltimore, 1 km from the center. On the map

♥   Cathedral of Mary Our Queen, Baltimore, 7.7 km from the center. On the map

♥   Monastery of Mount St. Sepulchre, Washington, 50.7 km from the center. On the map

♥   Ukrainian National Shrine of the Holy Family, Washington, 51.6 km from the center. On the map

♥   Basilica of the National Shrine of the Immaculate Conception, Washington, 51.9 km from the center. On the map

Photogallery of cultural heritage of Baltimore

Excursions over cultural sights of neighbours of Baltimore

Washington DC
Numerous city museums are of great cultural value. The most visited of them include the famous National Museum of American History. Its opening took place in 1964. The museum's exposition is devoted to the most significant historical events the state has ever experienced. Among the museum exhibits are reduced copies of the first steam locomotives and antique statues, a huge ... Open »
Philadelphia
There are about twenty religious monuments of different eras in the city. Gloria Dei Church and Old Pine Street Presbyterian Church are considered to be the most scenic. To make the cultural program diverse devote some time to local museums. One of the most visited venues is the Philadelphia Museum of Art. The museum houses one of the world's largest collections of paintings ... Open »
Atlantic City
If you like unusual tours, you're welcome to the authentic African American Heritage Museum of Southern New Jersey. It is dedicated to the culture and traditions of African American peoples who have inhabited southern New Jersey for many years. This private museum contains a very diverse collection of exhibits. Here you can see beautiful themed paintings, old photographs, and ... Open »
Manhattan
Skyscrapers are among main sights of Manhattan. Each of the high buildings is an impressive and unique architectural landmark. The most renowned skyscraper is the Empire State Building. Its construction started in 1929 and lasted almost for three years. Up to 1972 the 102-storage construction was the highest building in the world. This architectural landmark is executed in ... Open »
New York
Central Park is simply the best place for walks. The park’s square estimates more than 3 square kilometers. On its territory you will find children's playgrounds, sports facilities, and even a riding school. Fans of fishing will definitely find here much interesting, as well as those people, who simply want to enjoy the magnificence of nature and to escape from the city. If ... Open »
Pittsburgh
Even though the architecture of the North Side of the city is presented mostly with residential houses and dwelling facilities still there are several spots of tourists interest to visit. Among them tourists will discover the Carnegie Science Center, the National Aviary and the Allegheny Observatory meanwhile sport fans will like the majestic construction of local stadium. One ... Open »

Culture guide to Baltimore. Which fascinating sights to visit once you are in Baltimore: temples, churches, museums, theaters and castles. Recommendations (with addresses, phone numbers and links) on the places 'must visit' in Baltimore. Plan your own city excursion by using this page info!