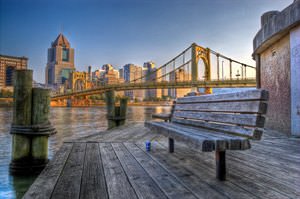 Each year the scenic city of Pittsburgh attracts more and more tourists from all over the world. Foreign guests are attracted with a friendly atmosphere of the city, numerous entertaining establishments as well as exciting sites and landmarks. A starting point of the city exploration is its central area which is known among local folks as the Golden Triangle. An official name of the city central area is the Central Business District which is located at the confluence of three rivers parting the city into for districts.
Guide to Pittsburgh sightseeing - things to see and to visit
This is a large port city situated on the bank of the Ohio River. Pittsburg is a major financial and trading center of the USA. The city was founded in the middle of the 18th century - in …

Open
The center of the city of Pittsburgh has preserved numerous majestic historical buildings neighboring currently modern skyscrapers. The territory of the central district locates two known sport complexes as well as the University of Pittsburgh which is one of the most prestigious educational institutions in the country. During a city exploration tour over the central district of the city travelers will discover numerous bridges. Pittsburgh counts more than four hundreds of bridges in total.
The Strip District will be of great interest for curious tourists. The area hosted important industrial facilities a few decades ago. Many historical buildings are preserved till nowadays. However today they are used as stocks and storages, many of the facilities serve as enterprises, some of them locate stores, restaurants and night clubs. A northern part of the city called the North Side is worth visiting and exploration as well. Copyright www.orangesmile.com
Cuisine of Pittsburgh for gourmet with top restaurants and cafe
Pittsburgh is a city of innumerable gastronomy establishments performing the restaurants and cafes of all types, culinary trends and scales. Tapas cuisine fans will love to visit the Seviche …

Open
Even though the architecture of the North Side of the city is presented mostly with residential houses and dwelling facilities still there are several spots of tourists interest to visit. Among them tourists will discover the Carnegie Science Center, the National Aviary and the Allegheny Observatory meanwhile sport fans will like the majestic construction of local stadium. One of the most beautiful parts of the city is the South Side being the favorite destination as among local folks so among city visitors. The center of the South Side offers a picturesque square named the Station Square. A hundred years ago the central railway station was located near the square. 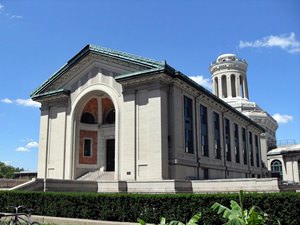 The square is still preserved till nowadays in its initial look. In close vicinity to the square tourists will find ancients stocks and storages, parts of the railway station premises as well as waiting areas and halls. The Station Square is an established place for holding of various entertaining events and festivals. The Oakland is considered to be a cultural center of the city. The district hosts various known museums, libraries and educational institutions as well as a student quarter, that is why the atmosphere in this part of the city is always vivacious and buzzing. The Carnegie Museum of National History and The Carnegie Museum of Art will be of great interest for all tourists and guests of Pittsburgh. An ancient chapel is well worth visiting as well during the exploration of the city.

In the section below, you can get one of our excursion, activities or city discovery tours over Pittsburgh and surroundings. Our website offers 10-30% lower ticket prices, when compared to the offline purchase on the spot.

City tours, excursions and tickets in Pittsburgh and surroundings

This guide to cultural sights Pittsburgh is protected by the copyright law. You can re-publish this content with mandatory attribution: direct and active hyperlink to www.orangesmile.com.
Pittsburgh - guide chapters 1 2 3 4
Reference information
Map of all art museums

Art galleries in Pittsburgh and around
♥   Art museum 'Andy Warhol Museum' Pittsburgh, 1 km from the center. On the map

♥   Art museum 'Carnegie Museum of Art' Pittsburgh, 4 km from the center. On the map

Cathedrals and basilicas near Pittsburgh
♥   St. John the Baptist Byzantine Catholic Cathedral, Munhall, 9.4 km from the center. On the map

♥   Blessed Sacrament Cathedral, Greensburg, 40.9 km from the center. On the map

♥   St. Vincent Archabbey Basilica, Latrobe, 52.7 km from the center. On the map

♥   Cathedral of the Holy Name of Jesus, Steubenville, 53.6 km from the center. On the map

♥   Basilica of Our Lady of Mount Carmel, Youngstown, 91.3 km from the center. On the map 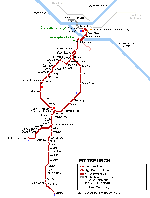 Photogallery of cultural heritage of Pittsburgh

Excursions over cultural sights of neighbours of Pittsburgh

Cleveland
Cleveland is ready to please tour lovers with an abundance of interesting sites to visit. The Rock and Roll Hall of Fame is dedicated to famous rock and roll stars. It is one of the largest museums of its kind in the world. Cleveland is often called the birthplace of rock. It was here that the world's first radio station broadcasting exclusively this genre of music was created. ... Open »
Buffalo
Delaware Park is considered the most beautiful park in Buffalo. One of the most famous landscape designers in the world - Frederick Law Olmsted – developed the design of the park. Long winding paths, flower beds of unusual shapes, and well-groomed decorative bushes – a walk in Delaware Park will certainly leave many exciting memories. The western part of the park has one ... Open »
Niagara Falls
The main spot of tourist interest in the city is the Niagara Fall being a unique natural landmark which is currently well known in every nook of the globe. The suburbs of the water fall are equipped with observation platforms and terraces open for tourists to enjoy the sight of the grand natural water creation. The most famous observation platform is considered to be the Table ... Open »
Washington DC
Washington is an ideal holiday destination for sightseeing tourism fans. This is a real treasure trove of unique historic and architectural sights, the highest "concentration" of which can be found near the National Mall. It is an extensive park area with a length of about a mile. In the center of the Mall is the Washington Monument - an impressive large-scale granite obelisk ... Open »
Baltimore
The Italian quarter of the city called Little Italy can be found near the harbor. The district is known as one of the most comfortable and scenic parts of the city. Of course, Little Italy is home to numerous Italian restaurants, interesting shops, and spacious parks. The Italian district will also become a perfect choice for those tourists, who enjoy walking. Fells Point ... Open »
Detroit
The central part of the city can offer no less interesting sights, including the Fisher Building and the Penobscot Building. It is noteworthy that these skyscrapers were among the very first in the city, they were built in the '20s of the last century. There are also more modern architectural monuments in the city center, including the One Detroit Center. Among other ... Open »

Culture guide to Pittsburgh. Which fascinating sights to visit once you are in Pittsburgh: temples, churches, museums, theaters and castles. Recommendations (with addresses, phone numbers and links) on the places 'must visit' in Pittsburgh. Plan your own city excursion by using this page info!