Cuisine of Yevpatoriya for gourmets. Places for dinner - best restaurants 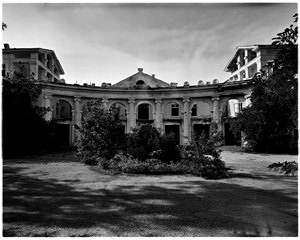 People began to settle on the territory of modern Crimea since ancient times. The formation of local culinary traditions was influenced by representatives of a variety of nationalities. Travelers, who will rest in Yevpatoria, should pay special attention to the Karaite and Tatar cuisine. Karaite is one of the oldest Crimean cattle breeding tribes, who led a predominantly nomadic way of life, which inevitably affected their kitchen.
Your active city break in Yevpatoriya. Attractions, recreation and entertainment - best places to spend your day and night here
In the holiday season, the most popular vacation spots are the embankment and the Frunze Park. There are always a lot of people here; even late at night on the embankment you can meet …

Open
In restaurants and cafes in Yevpatoria which specialize in cooking national cuisine, you can try a lot of interesting lamb foods, as well as excellent pastries. Dishes of local cuisine are quite hearty and nutritious, and therefore you can even get satisfied on half of your generous portion. Many vegetable dishes here are also prepared with the addition of meat; a fairly common meal is pilaf with mutton.
An important element of the national menu is the first dishes, based on the rich meat broth. Dishes of Karaite cuisine do not differ simply. For cooking many classical treats cook have to spend several hours. Fans of meat delicacies should definitely try dried lamb, which is considered one of the most delicious dishes of local cuisine; it is cooked according to old recipes. National cuisine is not limited to only meat treats; an important place is given to dairy products. As many years ago, today in Yevpatoria delicious cheeses are prepared, and with addition of milk mass of original sweets are prepared too. Copyright www.orangesmile.com
Advices to travellers: what you should know while being in Yevpatoriya
1. From the railway and bus stations you can get to any resort area by public transport, the most common type of which is a fixed-route taxi. It is not advisable to use the services of …

Open
If we talk about desserts, then it is worth mentioning Karaite halva. Very interesting sweets are cooked with honey, nuts and milk. Sea cuisine is represented here in varieties, so the lovers of fish dishes and sea delicacies will definitely enjoy a vacation in Yevpatoria. Practically in any cafe it is possible to try not only the most delicious Black Sea fish, but also squid, rapans, mussels and crabs. Pleasure is not cheap, but it is definitely worth it. The most popular fish restaurants and cafes are located on the waterfront. The resort presents gastronomic establishments of various directions, so fans of Ukrainian, Russian, European and Oriental cuisine can easily find a great place to relax.

This guide to cuisine and restauraunt in Yevpatoriya is protected by the copyright law. You can re-publish this content with mandatory attribution: direct and active hyperlink to www.orangesmile.com.
Yevpatoriya - guide chapters 1 2 3 4 5

City tours, excursions and tickets in Yevpatoriya and surroundings

Distance from Yevpatoriya center - 67.9 km.
One of the oldest and most unusual Christian monasteries is in Russia. The Inkerman Monastery of St. Clement is located on the Crimean peninsula, near the town of Inkerman. This monastery is carved in the rock. According to a legend, St. Clement was its founder. He personally cut down the temple, where the first Christians prayed. That was a significant event in the 1st century AD. … Read further

Searching where to eat - restaurants and cafe on Yevpatoriya map

Cuisine and restaurants in the neighbours of Yevpatoriya

Simferopol
Among the budget places the City Cafe number 1 points out. Its menu includes a lot of attractive dishes; treats here are suitable for both vegetarians and meat lovers. All dishes have interesting decoration. One of the main advantages of the institutions remains competitive price policy. Among the gastronomic places of Simferopol pub with a romantic name - The Power of the ... Open »
Koktebel
For those who do not like fast food establishments, it is worth paying attention to the classic cafeterias, which in the town are also many. The food in them is very tasty and quite cheap. Some popular cafeterias are perfect for visiting with children. From the huge variety of institutions of this level, it is worth highlighting the cafeteria "Lozhka", which is located on the ... Open »
Kerch
"Bales" is one of the oldest dishes of the Tatar cuisine, it is prepared from meat and cereals. Meat should be necessarily fatty, most often for cooking dishes pork is used, and from cereals barley or millet is preferred. Another dish of Tatar cuisine, which now may seem quite exotic, is a finely chopped liver with rice, which is placed in a natural shell and baked. This ... Open »
Odessa
The menu of the restaurant offers excellent meat treats, sea foods delicacies as well as a huge selection of salads and desserts. Affordable pricing is one of the major advantages of the eating house. A legendary gastronomy destination of the city and its genuine landmark is a beer restaurant “Gambrinus”. It has been serving city residents and its guests since 1883. Then ... Open »
Anapa
Mass of tents with a variety of pastries, shish kebabs and other delicacies can be found on the territory of local beaches. Choose food in them with great care, because on a hot day, it quickly spoils. The real salvation for many tourists is merchants who stroll along the beach and offer various soft drinks and light snacks, buying food from them should also be with great ... Open »
Zaporozhye
On the Stalevarov Street, there is a famous restaurant "Eurohat". Signature treats here are incredibly delicious and the menu features dishes exclusively of Ukrainian cuisine. Prices in the restaurant always remain at an attractive level, so the flow of visitors here is great at any time of the day. One of the best fast-food establishments in the city is the "Kartoplyana ... Open »

Travel notes on best cuisine and restaurants of Yevpatoriya (Ukraine) on OrangeSmile.com. Famous recipes and traditional dishes and courses in Yevpatoriya restaurants. Where to eat - our recommendations on popular places in Yevpatoriya, where you can taste delicious meal and also spend a good time with your friends.