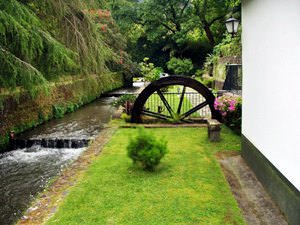 There are several quite old productions on the territory of Sao Miguel. For example, famous winery Quinta da Jardinette is located in Fenais da Luz. Here you can try several varieties of local wines, buy souvenirs, and join the excursion which will take about an hour. The manager will tell you a lot of interesting things about how wine-making appeared on the island, how it developed and what drinks are created here today. If you do not know Portuguese, then do not despair – excursions are conducted in English and German. After visiting the winery, you can buy your favourite wines at a local store at a fairly attractive price.
Shopping in Sao Miguel Island - main shopping streets, outlets and boutiques
Sao Miguel is not a small island. Here you can find shopping centres and shops with products from many well-known European brands. However, if your plans are to buy a large number of items …

Open
Be sure to walk along the streets of the small Ribeira Grande. Here you can see the central square, the town hall, the park and the beautiful arched bridge. Each of these objects is a real historical monument raised more than a century ago. It was the city centre that was the heart of the settlement for many years. Here you can plunge into the life of the islanders at the liquor production Mulher de Capote, where you can not only find out how liqueurs were made before but also to learn how workers and managers of the factory lived. You can get acquainted with the history of tea production at any of the two existing tea plantations, whose age exceeds two hundred years - Gorreana Tea Estate and Cha Porto Formoso, where you will be shown how tea grows, how it is processed, packaged and distributed to shops. Fabrica de Tabaco “Estrela” in Ponta Delgada, existing since 1892, will tell you the story of the tobacco production of Sao Miguel. It is worth coming here on Thursday at two o'clock in the afternoon when the company is open to tourists.
The exposition of the Tobacco Museum, located in a place called Maya, is also interesting. Here you can learn about the person who brought tobacco to Sao Miguel, how the locals began to cultivate this plant and what were the devices for smoking centuries ago. There is a rather interesting building of Melo Abreu brewery in the capital, which was built in 1893 and is still used for its intended purpose. There are periodically conducted excursions on the territory of the factory for everyone who wants to learn how brewing originated on the island and how to make a foamy drink now. Copyright www.orangesmile.com
Guide to Sao Miguel Island sightseeing - things to see and to visit
The largest of the Azores, San Miguel, has long begun to attract curious travelers. People come here to see its priceless historical monuments, have a scenic stroll and relax at charming …

Open
Most of the old buildings are located in the capital, Ponta Delgada. You can start exploring the city with the walk on the territory of the Fort of St. Brace. The fortification is well preserved, there are not only narrow streets and abandoned casemates beyond the perimeter of the massive walls, but also quite an interesting Military Museum. The fortress was built in the 15th century and has not been rebuilt since that time. Nucleo de Santa Bárbara do Museu Carlos Machado has quite an interesting collection. The museum is located in an ancient building of the monastery, whose age has exceeded three hundred years. There are all sorts of household items and weapons, coins and works of art of the islanders in the Museum's collection. The oldest items in the collection are more than five hundred years old. 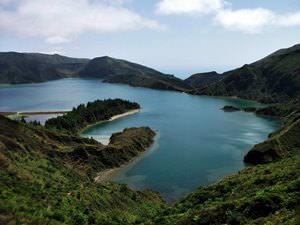 You should definitely see the old city gate on Portas da Cidade square. This is quite a beautiful building, which has become a real symbol of the city. There is a small church of the 16th century with a clock. The Palace of Santa Catarina Manor is a typical island-building of the 16th century, made in a minimalist style. Be sure to visit the island's oldest Church, Igreja de São Pedro, built in the 15th century. The building is not remarkable at all, but the interior will amaze all of the tourists and even those who are not interested in art. If you wish, you can take a walk in the park of the presidential Palace Palacios da Presidencia. Alas, tourists and locals can’t enter the building.
Family holidays with kids in Sao Miguel Island. How to entertain your child, things to show to children.
Sao Miguel doesn’t have a lot of entertainment designed only for children. There are attractions, children's rooms and entertaining programs at large hotels. In most hotels, the child …

Open
Anyone can learn the secrets of the local potters by visiting the pottery factory in Lagoa. Be sure to visit the island's first capital, Vila Franco de Capo. This settlement was built in the 15th century, but as a result of a powerful earthquake in 1522, almost all the buildings were underground, and the residents refused to restore the city, just moving the capital to Ponta Delgada. Today, after the restoration work, you can see the five-hundred-year-old churches, the town hall and the Central square here. There is also a statue of Magellan near the seashore.

In the section below, you can get one of our excursion, activities or city discovery tours over Sao Miguel Island and surroundings. Our website offers 10-30% lower ticket prices, when compared to the offline purchase on the spot.

This guide to cultural sights Sao Miguel Island is protected by the copyright law. You can re-publish this content with mandatory attribution: direct and active hyperlink to www.orangesmile.com.
Sao Miguel Island - guide chapters 1 2 3 4 5 6 7 8

The city of Coimbra has the status of the ancient capital of the state. Those who love the cultural program will be attracted by a rich scientific library in the building of the University. Situated near Lisbon, the village of Sintra will delight travelers with the National Palaces Pena and Monserrate respectively, the Moorish castle and the Convent of the Capuchos. The third day of your stay promises no less spectacular beauty of the sights. Also worthy of visiting is Setubal which is located on the Peninsula de Setubal. It is famous for its local Cathedral of a great current significance, as well as for Praça de Bocage square, 16th century castle and Santa Maria da Graca and the St. Julian’s Churches. The Pena Palace is the most impressive palace and park ensemble in the country. … Open

Excursions over cultural sights of neighbours of Sao Miguel Island

Terceira Island
Terra Chã was the scene of partisan battles during the Portuguese Civil War in 1823-1834, colonial wars and World War II. The local campus of Angra was a military hospital for most of the 20th century, where were treated employees of the expeditionary military forces of Portugal, England and the United States during the World War II and soldiers who returned from Africa ... Open »
Azores
Faial Island is home to a beautiful Caldeira Natural Reserve. Tourists can go up to the observation deck of Monte da Guia and enjoy the picturesque panorama of the island. Fans of water entertainments will enjoy Santa Maria Island more than others. In addition to luxurious beaches, the island is widely known for its beautiful church. A walk on cozy streets of the city will ... Open »
Graciosa
There are diverse pieces of art constructed by European architectures. It has to do with the necessity to supply inhabitants with drinking and process water. It creates a whole chain of semi-underground reservoirs and aqueducts. Local Flemish mills with red domes (typical for Graciosa) are extremely marvellous too. And there is a lot of such mills, as people used to produce ... Open »
Ilha do Faial
You should visit the Caldera crater. This is a protected area today. A unique relict beech forest has been preserved here. The crater is huge. There are several small but very picturesque lakes at its bottom. A 10km long walking route runs along the edge of the crater. A magnificent view of the bottom and surrounding area opens from its edge. If there is no fog, you can see ... Open »
Madeira
It was built in the 16th century and nowadays the magnificent building houses a winery. Travelers may follow the process of Madeira production and visit a tasting room and then buy a bottle of favorite wine as a token of memorable visit. The Se Cathedral built of lava building blocks, the ancient Fish market, the Santa Clara Church and the scenic gardens are most worth ... Open »
Funchal
Sao Tiago Fort also appeals to fans of antiquity; this religious building is located in the immediate vicinity of Funchal. The majestic fortification with walls of bright yellow is situated near the coast. The beautiful castle is one of the most important historical sites of the country. One of the most unusual excursion sites is the Nun’s Valley. It is the name of the ... Open »