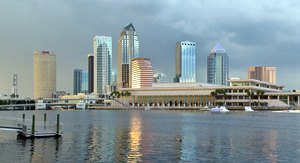 Tampa is the actively developing modern city with an interesting history, as well as lots of original features and legends. Several beautiful myths are associated with name of the city; one of which tells that it has inherited the name from an ancient settlement. Several centuries ago, the territory of the modern city has been inhabited by aboriginal tribes; in their language ‘Tampa’ meant ‘Fire sticks.’ Contemporaries believe that city owes such an unusual name because of its climatic conditions. In summer, locals and visitors can often see big lightning in the sky; it has been a distinctive feature of the region from ancient times. According to another version, the name to the city was given in the late 17th century by Spaniards.
Excursion over cultural sights of Tampa - 'must visit' points of interest
The most famous landmark is the Museus of Science and Industry (MOSI); it is the most extensive research institution in the southeastern region of the country. There are more than four and a …

Open
The Golden Age of city’s industry was during 19-20th centuries; at that time numerous cigar factories began to open up in Tampa. It is worth noting that nowadays Tampa continues to be associated with high-end tobacco products that many tourists buy as souvenirs. In the late 19th century a huge number of workers from Latin American countries and Cuba arrived to Tampa; the city owes its Cigar Capital of the World status mainly because of them.
Each year the city hosts many interesting events and festivals. The Gasparilla festival is famous far beyond the country. The festival was named in honor of the legendary pirate Jose Gaspar, who made his raids from the local coast in the 18th century. The most significant event of the festival is a theatrical performance depicting an invasion of pirates to the city. After that fabulous event, solemn parades and a variety of recreational activities are held on city streets. Copyright www.orangesmile.com
Your active city break in Tampa. Attractions, recreation and entertainment - best places to spend your day and night here
Tampa is a great place for a family holiday. A decent selection of entertainment centers, parks, modern cinemas and other leisure centers is offered to vacationers. The Adventure Island …

Open
Festival is held in the second half of January; it is usually visited by no less than 400 thousand visitors. Year-round Tampa welcomes a huge number of tourists from around the world. From their first days in the city travelers admit the pleasant atmosphere of cordiality and hospitality. The modern city with a rich history and cultural heritage never fails to enchant its guests.

This guide to traditions and festivals in Tampa is protected by the copyright law. You can re-publish this content with mandatory attribution: direct and active hyperlink to www.orangesmile.com.
Tampa - guide chapters 1 2 3 4 5 6

City tours, excursions and tickets in Tampa and surroundings

Cathedrals and basilicas near Tampa
♥   Cathedral of St. Jude the Apostle, St. Petersburg, 31.3 km from the center. On the map

Colors of Tampa in photos

Traditions and festivals in cities around Tampa

Florida
City of Sarasota is home to one of the youngest, but no less interesting holidays - the Festival of chalk drawings. This is a unique event dedicated to one of the most unusual trends in contemporary culture. The festival takes place in November and lasts for 10 days, during which a huge number of beautiful three-dimensional drawings appear on the asphalt of city streets and ... Open »
Kissimmee
The locals very often ask tourists where they came from. Every tourist receives a "Welcome" regardless of where he comes from – Moscow, Venezuela or China. Any citizen will try to explain all incomprehensible things as clearly as possible. For example, if you want to buy a SIM card from a local mobile operator, the locals will almost draw a scheme on paper to explain all ... Open »
Orlando
An important cultural component in the life of Orlando is the regular performances of the world-famous Cirque du Soleil. Famous circus performers and acrobats entertain the audience in a specially equipped pavilion in the Walt Disney World Resort. This pavilion is the only place in the world where they hold the legendary La Nouba show famous for its incredible special ... Open »
Miami
The same challenging and attractive for foreign tourists will be the Independence Day celebrated on the 4th of July. The fest is celebrated in every city and town of the United States, however the celebration of the holiday in Miami features some peculiar traits and traditions. Few days prior to the holiday the local people decorate the streets of the city with bright ribbons ... Open »
Abaco
The island is a perfect place for workaholics as they could finally relax here. Abaco with its fertile land and quite a stable temperature just invites to relax and to live for a bit without any hurry. It might be an explanation to the question of why the locals are that tend to delay everything for «tomorrow» which will never happen. It’s not about selfishness or a will ... Open »
Nassau
The main venue for the parades is the central Bay Street, and the bulk of the entertainments take place on the waterfront. A concert venue is equipped here for famous musicians and dancers invited to the festival. At open-air stalls, guests are offered popular foods and refreshing drinks. The history of this colorful festival is very interesting. Hundreds of years ago, ... Open »

Cityguide on traditions, mentality and lifestyle of people in Tampa. Learn the best periods to visit Tampa to discover its soul - authentic festivals, events and celebrations. We will also reveal the interesting habits, attitude towards the world and to tourists in Tampa.